Searches in the GRO birth indices for 5 years either side of her supposed birth year have not located anyone of the right name born anywhere with the right father that I have not been able to trace and therefore eliminate in later censuses (nor any illegitimate girl children that otherwise meet the criteria).

How can I find records of her birth?

Mary Ann Harper (spinster, aged 18) was married after Banns on 15th April 1883 to John Stanley Wright at St. Lukes Church, Birmingham, Warwickshire, England. She named her father as James Harper (deceased) with no occupation given. Both parties gave their address as Hill Street. The witnesses were a J. Marshall and a D. Marshall. [Source: Copy of the relevant entry of marriage from the General Register Office]

Stanley Wright was a painter and decorator born in Plumstead, Kent in 1861. In 1881, he was living in Kings Norton, Worcestershire.

The couple's first child Stanley Charles was born on 5 August 1883 at 42 Broadway Street, Burton Extra, Burton on Trent, Derbyshire. [Source: Copy of the relevant entry of birth from the GRO]. She went on to have a total of 10 children, born variously in Birmingham, Kings Norton and Sutton Coldfield (all Warwickshire/Worcestershire) as well Stapenhill and Burton Extra (both near Burton on Trent in Derbyshire.

From the censuses after her marriage:

I have not been able to locate her conclusively in the censuses before her marriage.

Although civil registration in England and Wales began in 1837 it wasn't actually compulsory until 1875 or at least there was no penalty for failing to register a birth and the law put the onus on the registrar to find and record births rather than on the parents to report it.

That said, in my experience the vast majority of events do seem to have been registered, but it's certainly possible that you are unlucky in this case and that it wasn't registered.

If you've exhausted all attempts at looking for name/place/date variations in the civil registration indexes then parish registers would be the next step.

One thing that I would do if you haven't already is to look for pre-marriage census entries, both for her and for her apparent father as recorded on the marriage certificate to see if that offers any clues - if you find the father for example then you might find her recorded with an alternate name.

Years of birth in censuses and (especially) marriage records can often be quite inaccurate. Sometimes, if the bride or groom doesn't tell their future spouse their correct age they have to keep up the pretense in future censuses. So widen the search years for the birth, especially earlier.

It's more likely the name was misspelt, either recorded or transcribed incorrectly. Consider more name variations and using wildcards in your searches.

The first name given on her marriage certificate and in the censuses may not be her first name, could be a middle name. Somebody registered as "Violet Rose Smith" might use the name "Rose" in all future events. Although Freebdm.org.uk allows a search with a wildcard for the first name ("* rose") most registrations only had an initial for the middle name, so you'd be better off searching for "* r" with the correct surname (assuming the name you're after is Rose).

You say you have the possible name of her father. Again the first name given may be a middle name or nickname, but if his name is at all rare you could look for him in the censuses (the occupation, or addresses, may help confirm it's the right one). His household in an earlier census may contain the daugther who is the future bride, giving possibly her real first name(s) and more accurate birthplace and age. Trace that family forward in the censuses after the marriage, just to be sure that daughter then disappears.

One more thought: if you're lucky, one of the witnesses at the marriage may be a sibling who could be easier to trace, which would again help to identify the family in censuses before the marriage.

When this has happened to me, it mostly seems to boil down to two scenarios:

1) The birth name was not as expected, e.g. being born before a marriage, or the mother was previously married.

2) A registration missing from the GRO civil registration index. In this case, I'd recommend visiting www.ukbmd.org.uk who transcribe the local registrations. Their coverage is patchy but I believe it covers Dudley in the West Midlands.

If you want to provide more details in the question then I'm sure some of us will lend a hand with the search.

Also, there will have been Reading of the Banns there.

Several people have suggested parish registers are your best source and I agree. There is a big but there though in that some are still in use today in the parish. There was a case quoted only yesterday on another forum of an 1830's parish register still being used in 2013. It has never been microfilmed it has never been submitted to the GRO so will not appear on an index until the book is full and only then if it is sent to the local Archives / RO.

If you go to findmypast.com, try entering the following into the search:

Then use the filters at the left of the page to filter your search to just "Births and Baptisms",

I don't see any mention that you've looked through church/parish records.

You might want to try parish records from Dudley, England.

Check the FreeREG website for Staffordshire (the county containing Dudley). The "D" page]2 for Dudley indicates that the Baptisms for Dudley in the 1860's for certain churches have been completed.

So now go to the FreeREG Basic Search. Enter as the Record Type: "Baptisms", as the Surname: "Harper", as the Forename: "Mary Ann", as the year: "1865" +/- 5 years, select "Staffordshire" as the County, and see if any of these records match what you need. Check also for other known relatives.

There are also a number of other references via Google to "Dudley Parish Registers".

And maybe, if you get lucky, adding "Harper" to the previous Google search might yield some rewards.

How about this at: http://familytrees.genopro.com/HarryCaper/FamilyTree/default.htm?page=Harper-MaryAnn-ind00173.htm 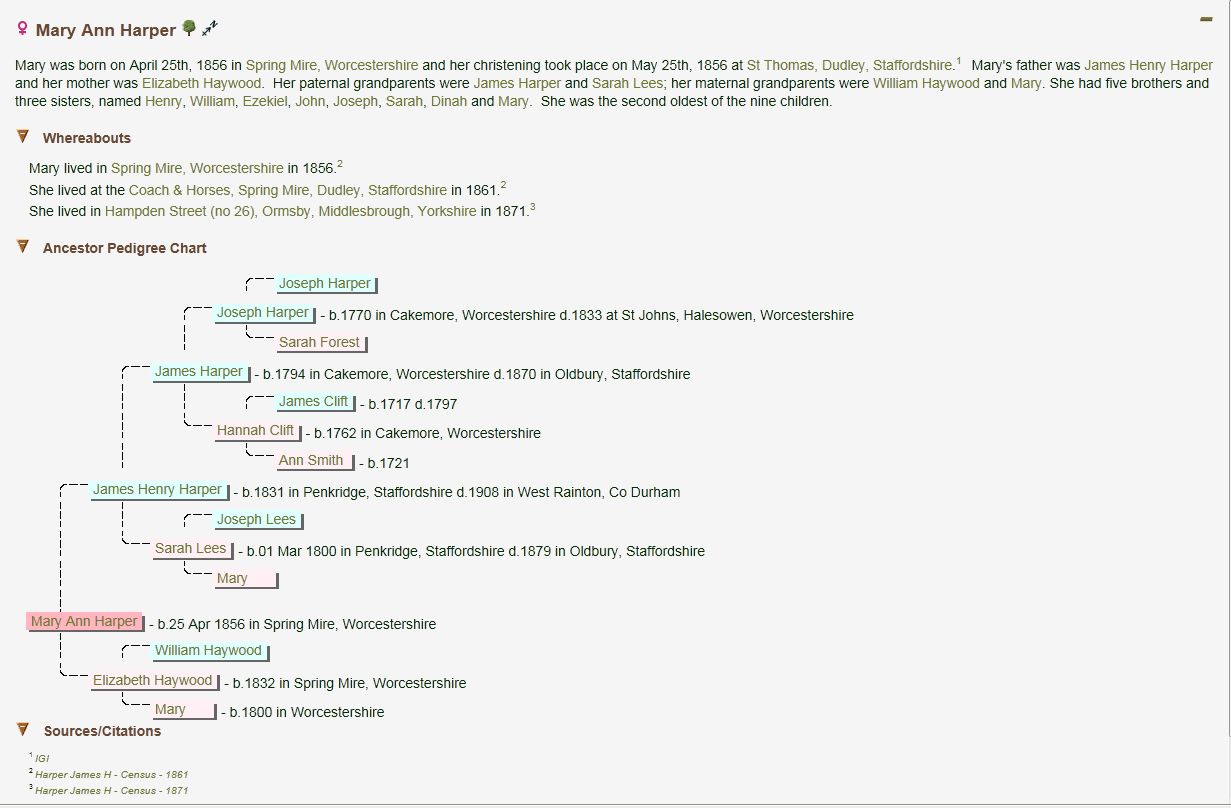 If the date of the Baptism for Mary Ann Harper is correct at c. 1866. This appears to be the nearest entry by date. For the person required by you. Mary Ann Harper baptised 7 Jan 1866 St Lawrence, Darlaston, near Wednsebury, Staffs, England. Father James Harper Mother Betsey

However, if the family were in fact, already in Dudley at the time of the baptism and the date is earlier there is also the following entry which may therefore be of interest to you, if you have not already seen it. Mary Ann Harper, baptised 25 April 1856, St Thomas, Dudley, Worcestershire. Father James Harper Mother Elizabeth.

13
How can I identify all the possible alternatives for a surname
4
Does the available evidence support these assumptions?
4
Where was Mary Ann Harper in the 1881 England census?

11
How can I find out about military service in WW1 for an English veteran?
7
How might a "nurse-child" have been placed with their carers?
8
How can I assess the statistical probability that an individual is the one I seek?
4
Where was Mary Ann Harper in the 1881 England census?
8
Finding an elusive ancestor after the 1901 census (who may have deserted his family)
4
What circumstances could lead to these birth registrations?
7
Formulating a strategy to locate a marriage
1
Why is my ancestor missing from the New GRO Index - England?
2
Dealing with different birthplace and names of parents in England?