My cousins and I are pretty sure my great-great grandfather, Everett T Malcom, changed his name when he moved west. We have a compelling theory that his birth name was Mark Ellsworth Templin, and his parents were John Wesley Templin and Jane Stokes. My great-uncle (Everett's grandson) took a DNA test, and it matched with several descendants of John Wesley Templin and Jane Stokes as "third cousins", with "extremely high" confidence (according to ancestry.com).

My concern is that the DNA testing companies only let me see the trees for people who are genetic matches. There doesn't seem to be a way to find out if there are other descendants of John Wesley Templin who are not matches.

Doesn't this create a significant risk of confirmation bias?

If so, how do I counteract this?

Is there a site that will let me view DNA info for people whose family trees match, instead of the other way around?

Blaine Bettinger has said in the Genetic Genealogy Tips and Techniques Facebook Group:

Confirmation Bias - interpreting evidence as supporting a hypothesis even when it doesn't actually support the hypothesis - is one of the biggest ongoing challenges in genealogy, including with DNA evidence.

In your question, you state your bias in the first paragraph. You basically have your information that you're "pretty sure" of and have "a compelling theory" of. Most people (and it's a natural action) will be looking for DNA data to support their bias and will dismiss most DNA data that is negative evidence for their bias. The true way to get around confirmation bias is to accept all evidence and use it all together to come up with the best conclusion. That means following the Genealogical Proof Standard of the Board For Certification of Genealogists.

Regarding only seeing trees where your DNA matches, well, that's what you want to do to find connections. A DNA match will indicate a likely relative.

However, the opposite is not true. Lack of a DNA match does mean that the person is not a close relative, such as 2nd cousin or closer. But once you get to third cousins and further, there is no guarantee that you will share any DNA at all with them, even if they are truly related.

So trying to find non-DNA matches in trees is not useful except for relatives who are second cousins or closer.

Yes, there is a site that will let you search trees of DNA testers whether they match you or not. The site is GEDmatch Genesis. They have a several tree searches available:

Then you can look up their GEDCOM ID# and find out their DNA kit number: 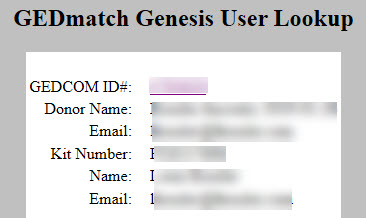 That will allow you to check to see if their kit number is in your list of DNA matches.

The biggest question is "how deep and complete are your trees?", so you know you're not connected other ways. Also, do your 2nd cousins match their 2nd cousins? Did John Wesley Templin and Jane Stokes have siblings, and do you match those branches?

Suspecting a recent name change is good reason for testing Y-DNA. Try to find direct male descendants of Everett T Malcom and John Wesley Templin, and offer to pay for Y-37 tests at FamilyTreeDNA. If they match, Everett was probably a Templin. If they don't match, you can move on to other theories.

If you can't do the Y-test, mtDNA through the female lines can also show a "possible connection" or "no connection".

Aside from those, for atDNA you want as many testers as possible from both sides. If you have a subscription to Ancestry, you can see all the public trees, whether they have tested or not. Hopefully you have many cousins among them.

If the couple in question had multiple children, I like to find matches to as many child-lines as possible:

You might be able to use Ancestry's DNA Circles in this case, although it's kind of a crap shoot. Their DNA Circles will compare your tree with those of your DNA matches and attempt to identify common ancestors. It will also show other users with the same listed common ancestor, as long as they match anyone else in the DNA Circle (even if they don't match you). There are several issues, though: 1) you can't predict which ancestors AncestryDNA will deem worthy of a Circle; 2) they have (at least in the past) tried to assign bogus "ancestors" on the basis of multiple DNA matches; 3) AncestryDNA is apparently trying the replace DNA Circles with Thru-Lines (which may eventually provide the same sort of view, but is even more casual about proposing ancestors from other people's trees as your own).

Also, although as mentioned earlier, it isn't possible to presume non-relation based on a single pairwise non-match, it may be possible to determine a statistical likelihood that gets you what you're looking for. In one of my ancestral families, I have four samples in the same generation as my parent, each descended from a different child of the common ancestors. 3rd cousins in their generation have (I believe) about an 80% likelihood of a significant match. So the likelihood that another actual 3rd cousin would match none of them is roughly .20 x .20 x .20 x .20, or less than 2/10 of a per cent.

With 4th cousins, assuming 50% likelihood of a pairwise significant match, you get similar results with 8 samples (4/10 of 1 per cent that another cousin matches none), presuming that samples are spread throughout the descendant tree and not, for example, just you and your siblings.

It gets worse further out (20+ diverse samples at the 5th cousin level).

Not the answer you're looking for? Browse other questions tagged research-methods autosomal-dna or ask your own question.

5
Using DNA to link individuals after a name change

8
Working with autosomal DNA results
11
Generational Loss of Data with DNA Testing
2
Finding my Great-Grandfather when DNA test not conclusive?
4
Is it possible to fall below the lowest amount of shared cMs for a half first cousin and still be a half first cousin?
3
Strange results on DNA Test
1
Triangulation with DNA Results - is something amiss?
2
Confirming possible half sibling from AncestryDNA?
2
Is a 12 CM 1 segment match better evidence for a common ancestor if it's otherwise unlikely?
3
Understanding double cousins?
0
Trying to narrow down biological grandfather