Edit: The enumeration district for Kennady Township was 0017 and 40-19.

I believe there is an enumeration district that was missed in the 1920 census that contains a few of my ancestors and their peers. I am concerned about the Township of Kennady in Le Flore County, Oklahoma.

I'm not sure what the best source is for enumeration district descriptions, but per Ancestry here they are: 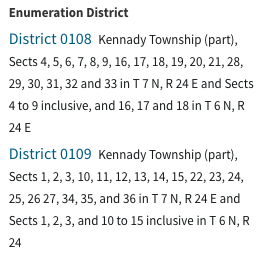 The following link provides the 1930 Enumeration District Map for Kennady Township (I could not find the 1920 equivalent): 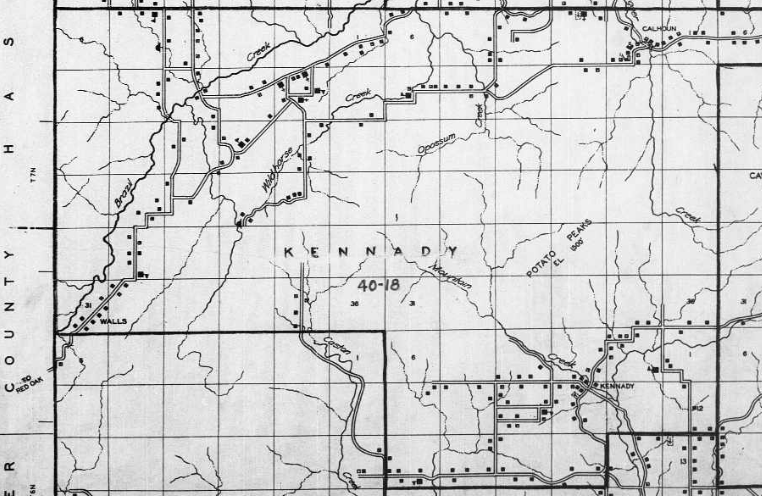 Note the irregular shape of the township, with the actual town in the southeast corner. A topographical map reveals that a large hill cuts through the township: 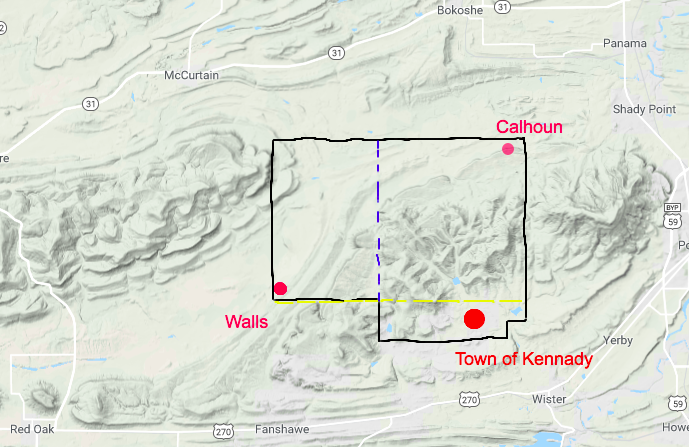 Cross-referencing the ED descriptions and the 1930s ED map, it appears that T 7 N, R 23 E is missing, along with a considerable proportion of the Kennady Township's population. I have searched the border townships/counties' enumeration district descriptions (again on Ancestry) and could not find T 7 N, R 23 E.

My questions are (in order of importance):

This is a brick wall that has plagued my research for nearly a decade. I truly appreciate any insight or ideas on how I should approach this.

This answer is an overview of the 1920 Census microfilms and aids for using the census, using your missing ED as a case study. It will cover some of the resources you've already consulted for your question -- consider this a checklist to make sure there aren't resources or techniques that you have overlooked. This is also to make the answer more useful to other people who might have the same problem for other geographical areas.

My experience is that, except for a handful of well-known cases where schedules were lost, it's difficult to find out whether or not a particular geographical area was skipped during enumeration or during microfilming. What does happen sometimes is that websites like Ancestry will re-arrange the digital images, making it even more difficult to find a specific location or family if you are 'walking through' the microfilm. Whenever I get stuck and can't find what I'm looking for, I go back to the very beginning and review all the available resources.

Step 1: Go to the original repository and see what guides exist for the records you are looking at.

The US National Archives and Records Administration (NARA) has put many of their guides to Federal Records and portions of the microfilm catalog online. We don't need to order the microfilm itself these days because we can find it online, but we can still use the guides and finding aids. For the 1920 Census, the online guide starts here: 1920 Federal Population Census - Microfilm Catalog - Part 1

Many NARA microcopy publications have descriptive pamphlets (DPs) which describe the records. Some are simply the roll lists from the microfilm catalog. Some have descriptions written by the archivists that alert the user to problems such as records being filmed backwards or out of order. We know from the online guide linked above that the 1920 Census is NARA microfim publication T625. To get the DP, go to the online ordering at https://eservices.archives.gov/orderonline/. You'll be redirected to a screen that looks like this:

You can either use the keyword search in the upper box to look for "1920 Census" or type in "T625" in the lower box. After that, you'll get a list of subsets for T625 available for ordering. Pick one, and look for the box on the right-hand side of the screen with the PDF icon: 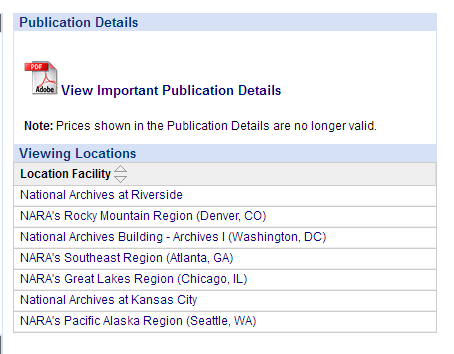 Part one of the online guide lists the following for Oklahoma: (see note below the quote).

Your target county, Le Flore County, is not in this list, nor is Kennady in the list of separate townships and cities. Added note: this part of the online guide refers to the available ED maps, not the census schedules.

To double-check what's going on, first I turned to the interactive website for the Atlas of Historical County Boundaries at the Newberry Library and checked their county chronologies:

From this we see that Le Flore did exist and there should be population schedules we can look at, even if there is no map. Let's check the DP for T625. From the DP, we learn:

I repeat this process whenever necessary, getting the DP for any NARA Microcopy publication I use in my research.

NARA's guide tells us how people were supposed to be enumerated:

Individuals were enumerated as residents of the place in which they regularly slept, not where they worked or might be visiting. People with no regular residence, including "floaters" and members of transient railroad or construction camps, were enumerated as residents of the place where they were when the enumeration was taken. Enumerators were also to ask if any family members were temporarily absent; if so, these were to be listed either with the household or on the last schedule for the census subdivision. Thus, the user should always check that page. The answers that appear on the microfilmed schedules depend upon what the enumerator recorded and what the people interviewed told the enumerator.

Researchers who want more details can get the enumerators' instructions online, via the US Census Bureau's website, sites like Google Books, or a 'good parts version' at IPUMS USA: 1920 Census: Instructions to Enumerators.

NARA's online guides, which were created from their published works, are quite extensive, but they aren't always up to the minute about what's available online. More material is being added online at such a rate that even NARA's list of Microfilm Publications and Original Records Digitized by Our Digitization Partners isn't necessarily up to date.

Another important source of information is the FamilySearch Wiki. A list of the articles consulted is at the bottom of this answer. (For any record you access on FamilySearch, from the Search page, click the "Learn More" link to take you to an article about the records you are searching.)

The maps reproduced in this microfilm publication are arranged alphabetically by state, then by county, then by census year, then by local jurisdiction. As noted above, however, there are gaps in coverage. Although most counties are included, not all census years for a given county may be included. Coverage is most complete for the 1930 and 1940 censuses. This undoubtedly indicates that the Bureau’s collection of maps for the 1930 and 1940 censuses was more extensive than for the 1900–1920 censuses.

(If you have to use a later map for your target ED, Steven P. Morse's One-Step Web Pages has a converter that will put you in the right ED. See the Resources section at the end of the article.)

My copy of the DP for A3378 has a typo -- the Enumeration Districts descriptions are NARA Microcopy publication T1224. (T1234 is Public Land Survey Township Plats, compiled 1789 - 1946, documenting the period 1785 - 1946, available at Ancestry, which may also be useful for your Oklahoma case).

T1224 is available on microfilm at the Family History Library but it has not yet been digitized:

A search on Worldcat.org only has the listing for the Family History Library.

The DP for T1224.pdf says that for the 1920 Census, descriptions for Oklahoma and Oregon are on Roll 55.

The information on Steve Morse's site comes from Ancestry, and gives the same information you've already found (or in the case of the range and township you want, what you haven't found):

By now you're probably saying "But I already did all that! Now what?"

Sometimes the people we want to find in the census are just plain missing, for whatever reason. If all else fails, fill in with any other record type you can, and work inwards towards the 'hole' by starting with what you know and working step by step in time and in space.

It might be possible, if the records survived, for a researcher to ferret out which enumerator was responsible for covering that area, then looking for evidence about whether the area was covered or not, by researching in Record group 29 at NARA -- but that's advanced research, and there's no guarantee the correspondence and reports you would need were turned over to NARA.

Census articles at the FamilySearch Wiki:

Note that the FamilySearch Wiki articles generally include citations for the works referenced when the article was written. For any article or book, use the bibliography and references cited as a springboard to further research.

Not the answer you're looking for? Browse other questions tagged census-records 1920s oklahoma or ask your own question.

5
Missing enumeration of Union St. in Flushing, Queens, NY in 1940 census?
11
Street index for Canada 1921 census
10
Transients and New Arrivals in the U.S. 1940 census
13
How would you handle a census record that is almost certainly the target family but which has too many discrepancies?
7
How to connect digitized images to a map?
7
Where are 1910 US census records for Topeka State Hospital Inmates?
4
Are Orphanages Included in the U.S. Census?
5
Finding person missed in 1920 census?
2
Why might ancestors be missing from 1926 Canadian census?