A 1914 USA immigration form says Marie Paudois was born in "St. Lagille, France" but a web search only turns up "Rue St. Lagille" in various French cities. Can't find a village or department by that name.  My suspicion from other documents is that it's in Bretagne or another western department.

Is there an online gazetteer that is likely to help? We have almost two weeks unplanned and we're already in northern Spain, so we'd like to go through there. 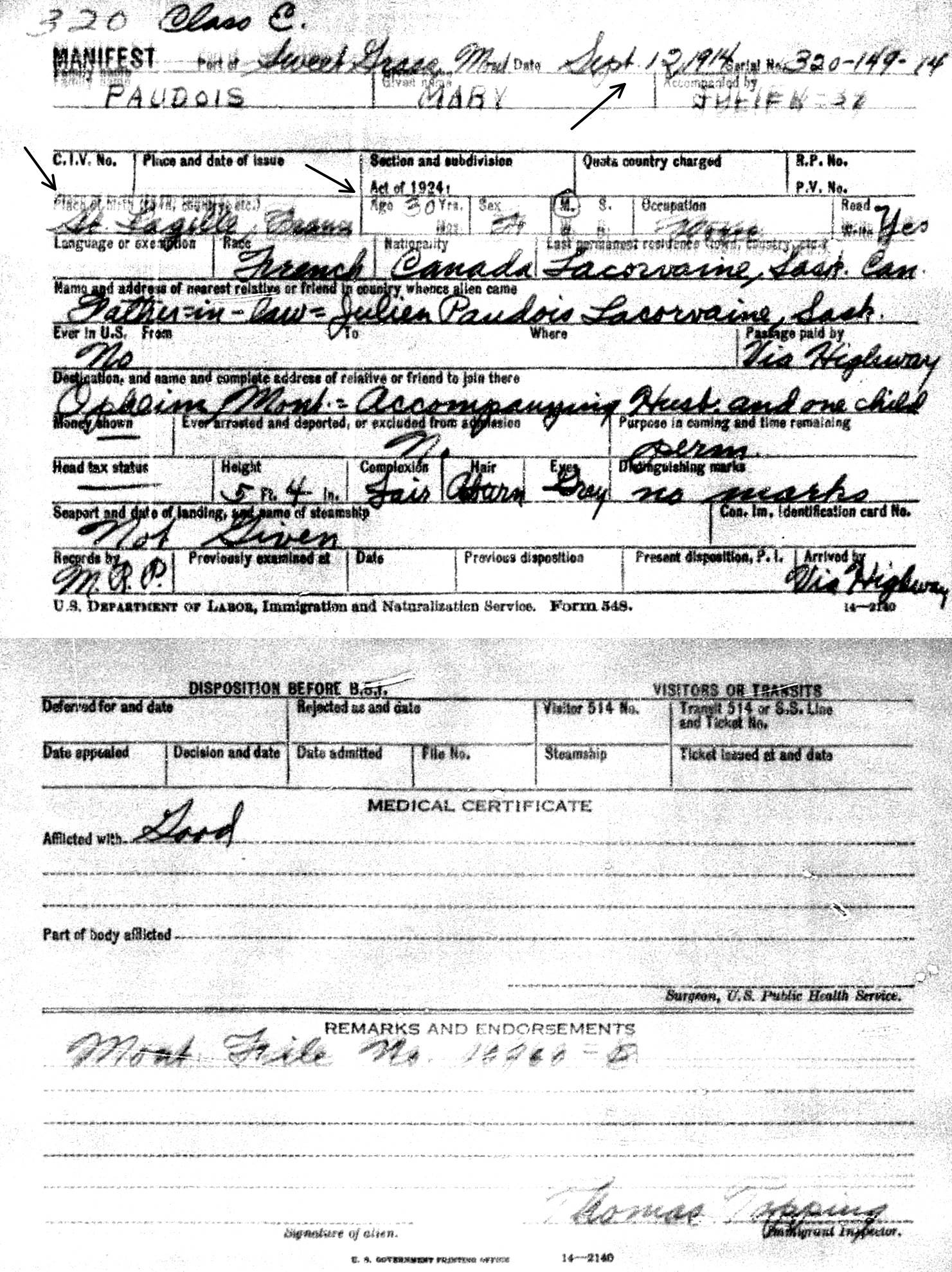 Julien Joseph Emile PAUDOIS, born in Saint-Mars-la-Jaille (probably what was later turned into "Saint Lagille", as it sounds similar) on the 6th of May 1875, son of Julien PAUDOIS and Joséphine BOSSÉ.

OK, this is too long for a comment, but isn't yet an answer. More documenting a search.

The Father-in-Law, Julien Paudois, actually lived (and died) in Lacordaire, Saskatchewan. His grave is on Find a Grave, and his probate records are in the Saskatchewan Probate Estate Files, 1887-1931 collection of Familysearch. (His middle-name was Pierre.)

This suggests that the card was filled out by someone who misheard (or mis-transcribed) what was said. This does not fill me with confidence about the birthplace actually being 'St.-Lagille'!

Julien Paudois Sr appears (with variant spellings of his name) in the Canadian census:

From which I found his wife, Josephine, and his son, also named Julien.

The search also led me to Julien (jr)'s immigration card: 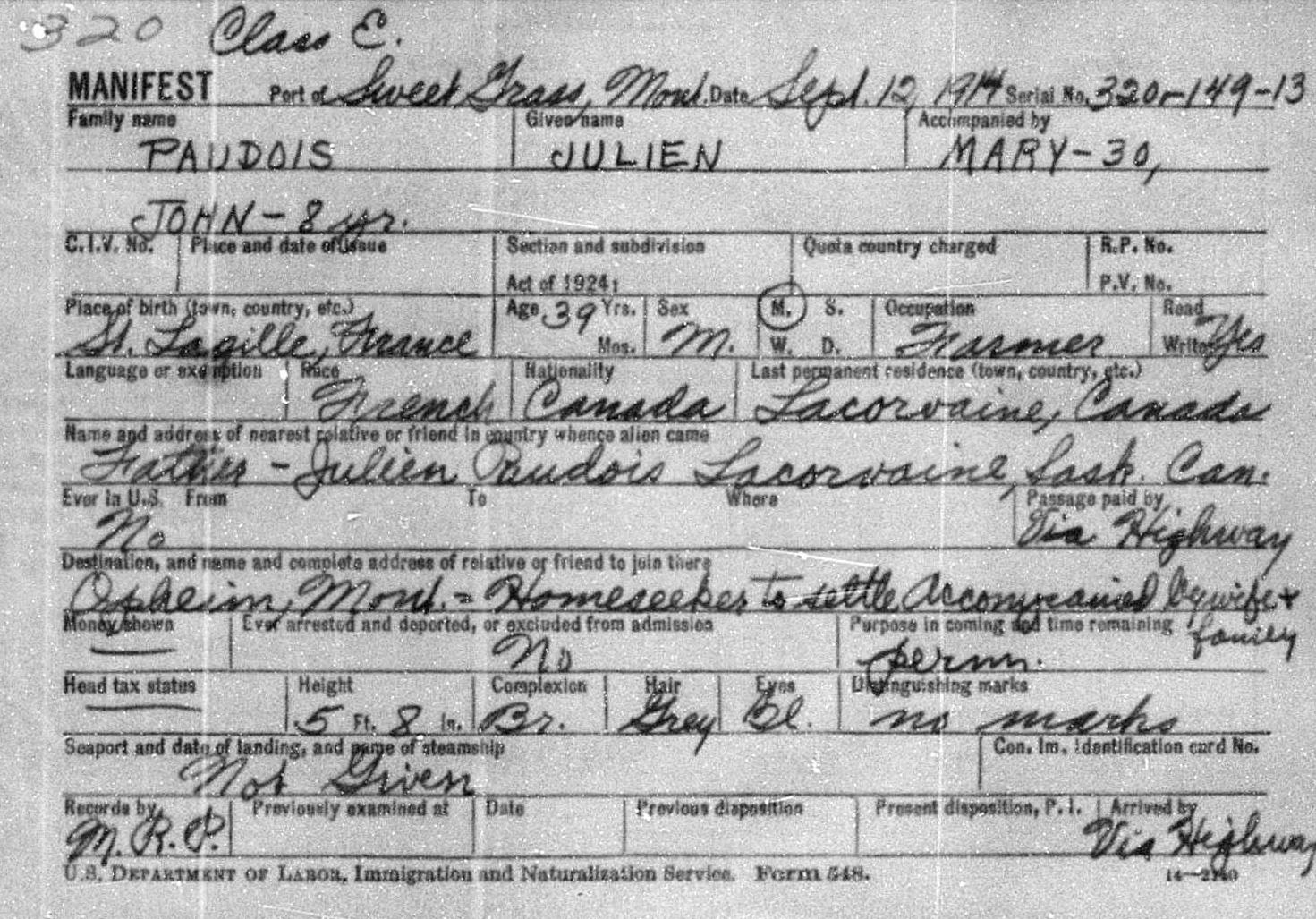 Notice that his place of birth is given as being the same as Marie!

His son's name was given as 'John': 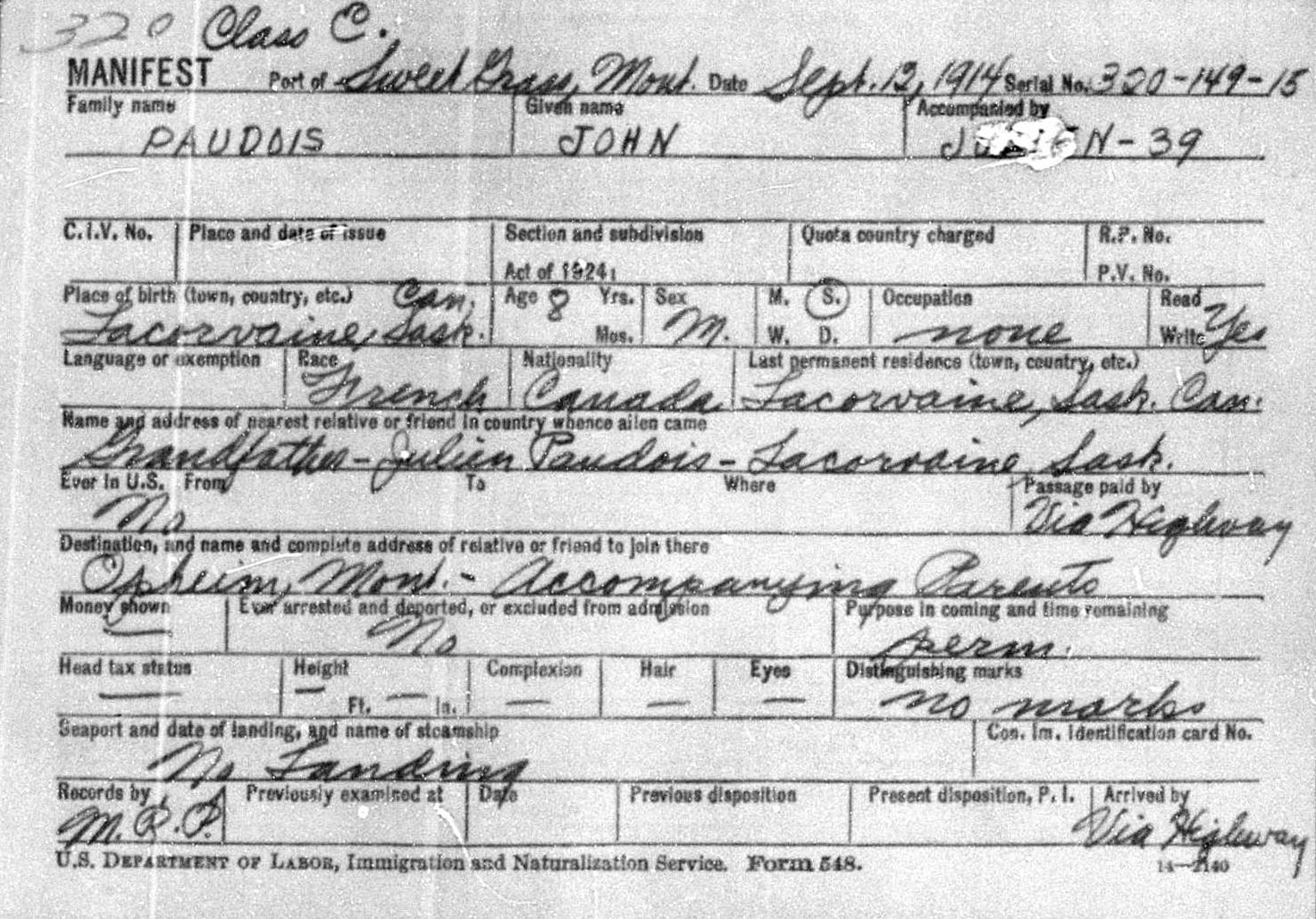 From that we also have his wife, Marie whose maiden name was Ménage.

I haven't yet found their Canadian immigration records (which might give a place of birth).

They weren't yet naturalised US citizens at the time of the 1920 census where Julien, Marie, and Jean identify as 'aliens' ('al' in the 13th column, just after the year of arrival, given as '1915'). [Note that the surname has been indexed as 'Pandors']

Ancestry has a record of a 'Julius Paudois' in Valley County, Montana in the Montana, County Naturalization Records, 1867-1970 collection. This is our man (a big THANK YOU to @JanMurphy for that!).

This gives us the date of birth for Julien Jr, as 26 May 1875, but place of birth is just given as France:

Marie/Mary's date of birth is confirmed as 1878, but the place of birth given is also just 'France'.

We also know from his deposition that Julius had been a naturalised citizen of Canada. Unfortunately, according to the website of the Library and Archives Canada:

Immigration, Refugees and Citizenship Canada holds records of naturalization and citizenship from 1854 to the present. The originals of records dated between 1854 and 1917 have been destroyed.

Apparently, the card index that survives 'rarely contains any other genealogical information', so is unlikely to help in our search.

There is also a 'Mary Paudois' in the collection Records of Aliens Pre-Examined in Canada, 1904-1954. (once again, a big THANK YOU to @JanMurphy!)

Even given the terrible image quality, it's clear that this doesn't give us any more useful information to help identify here place of birth.

However, if this is the right person, it seems she arrived in Montreal in July 1903.

in the hope that they might specify their actual place (or places) of birth in France.

If anyone fancies checking the information above, that would be great.

Also, if anyone has any suggestions, feel free to chip in.

Like I said, very much a work in progress ...

The FamilySearch Research Wiki article also lists several references that are at the Family History Library, many of which have not been microfilmed yet. You can try searching for other libraries closer to your current location by looking those titles up in WorldCat.

The FamilySearch Wiki Article France Finding Town of Origin has an overview of record types that are likely to have a place of origin in them.

Another option is to see if you will be near a Family History Center while you're on your trip. You can find a center by searching on the Contact Us page, reached by the drop-down menu on the top right of the FamilySearch home page.

You may also want to consult the FamilySearch Wiki article France Online Genealogy Records in case there are records that might help.

For further reading on the original record shown in the question:

In her article, Claire Kluskens says:

Some commercial genealogy companies are making these NARA microfilm publications accessible from any desktop via online access. Unfortunately, however, the online image quality is sometimes poorer than the image quality of the microfilm available for public use at the National Archives. Unfortunately, also, the explanatory information accompanying the online images often fails to note from which specific NARA microfilm publication and roll the image came from, which makes it difficult or impossible for conscientious researchers to completely and accurately cite the original data source.

It's a shame that you didn't have time to request a cleaner copy of this image from the US National Archives before going on your trip.

Not the answer you're looking for? Browse other questions tagged historical-gazetteer place-names birthplace or ask your own question.