It's not clear to me how both surnames should be entered for women who took their husbands surname when they married. On some genealogy websites I often see married women's names displayed in the format:

I like how the maiden name is rendered in italic. I don't know if that's a convention or not, but I think it makes it easy to understand where the different parts of the name came from, and I'd like to eventually produce a document with names in this format.

I looking at the Gramps interface I see a two different ways I could enter names like this:

Which way should the names be entered? Is there a convention for entering names like this? Additionally, when entering the married and birth names, should I specify the full name in both places?

Edit: The Gramps 5 interface is nearly identical to Gramps 4 from what I can tell.

This is not specific to Gramps (not a Gramps user), but a general comment on naming individuals.

There are at least 3 main options for recording the name of an individual: (1) their name at birth; (2) their name at death; (3) their primary use-name during their lifetime.

Published genealogies have very consistently used option (1), although there are exceptions, e.g., when names are translated from one language to another (as when someone born Johann Heinrich is commonly known as Henry during their lifetime). I'm not sure where the italicized middle names come from either - other than in outlines, published sources generally list married women as Given (Maiden) Married.

Option (1) is also what you'll see if you look at FamilySearch Family Tree. So,if your software is capable of doing matches against the FamilySearch Tree, you'll have better luck if you use the same naming convention.

Option (2) is what you'll see on, say, FindAGrave (the name on the headstone). I don't know of any tools that try to match directly to FindAGrave - Ancestry has their own FindAGrave index, and their hint software is smart enough to understand the difference between maiden and married names. So, using option (2) doesn't gain you anything there, and in all cases, there's the issue of multiple marriages.

Option (3) covers a number of scenarios - in addition to that mentioned previously, there's also the case of women who re-married late in life, but used their 1st husband's name for most of their lifetime. There are also adoption cases, where children's adoptive names don't reflect the family they were born into.

Personally, I list birth names as the preferred name for all individuals, and if use-names differ, I list them as AKAs. In my software, this would show up as Johann Heinrich "John Henry Snyder" Schneider. A little clunky, but it works for me.

If you're uploading your tree to a website (especially if it's cousin bait), you might also want to consider what name other researchers might be using when they search for, or match on, a particular individual.

I'm a new Gramps user and had this same question. After much searching I concluded that the best way is to add multiple names under the 'Names' tab: 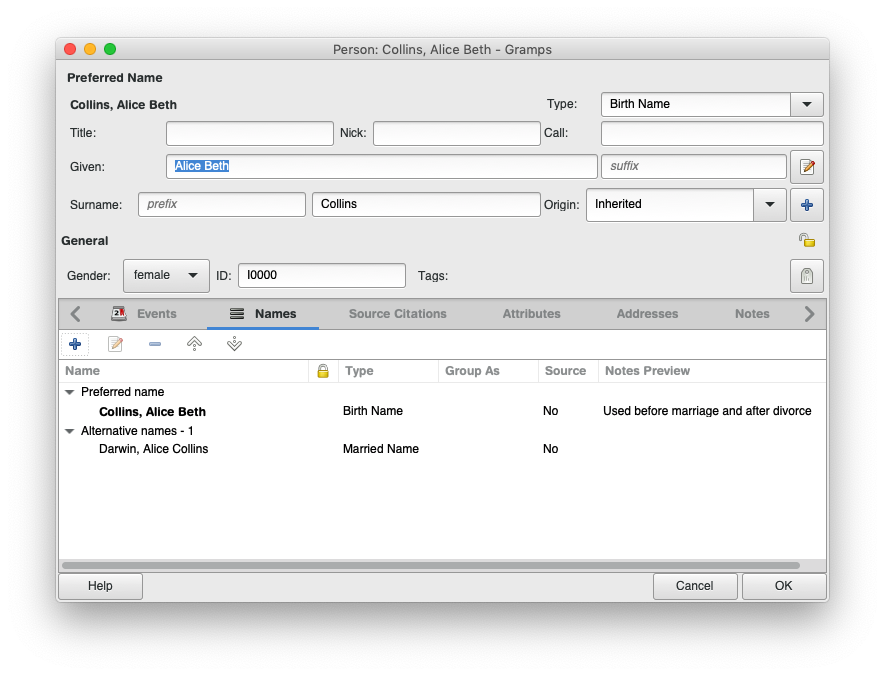 Unfortunately this requires retyping the given names, but it gives an unambiguous name and doesn't rely on any particular conventions. You do have to choose which name should be the 'Preferred' and which the 'Alternative'. It seems like most geneologists use the Birth Name as Preferred (in agreement with @cleaverkin's answer).

I haven't seen any good ways of recording when a particular name was used. So far I have been recording this in a free-text note.

I have also seen the SURN record used for maiden names in the export from other programs (e.g. geni.com's GEDCOM):

I have so far been unable to get Gramps to produce similar output, and it's not clear to me whether this is an abuse of the GEDCOM spec. I think Gramps' two-name approach is clear, even if it duplicates the given name information.

Not the answer you're looking for? Browse other questions tagged surnames gramps or ask your own question.