I have asked questions relating to Alexander Campbell Harris before.

You may recall that I had issues with his year of birth due to differences between the information on the marriage and death certificate.

Taking the information from the marriage certificate his fathers name was Samuel Harris and his fathers profession was Mechanical Engineer.

By using the age at time of death (instead of marriage) it would make his birth 1875.

Family members have always said that there is a Scottish link here because of Campbell. So I decided to use FindMyPast first and the census logs and came up with: 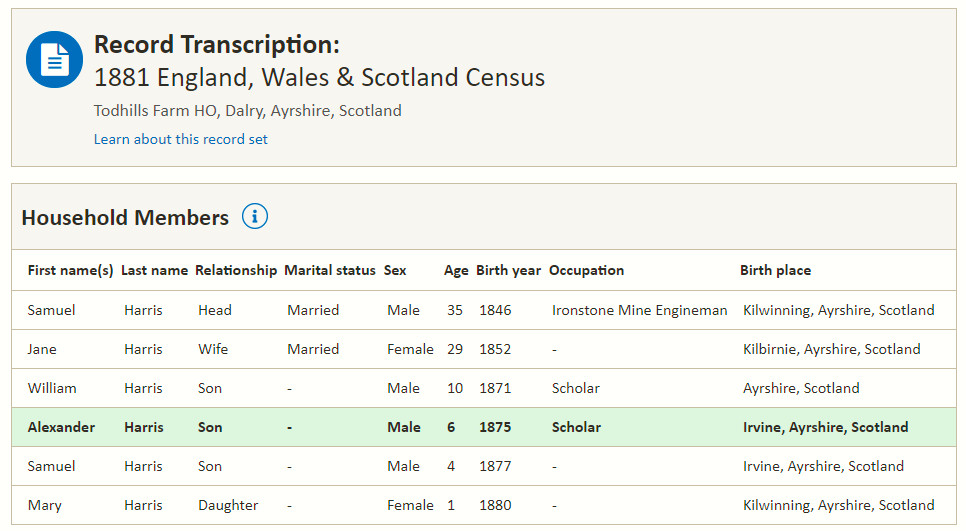 The fathers name and profession is correct and the Alexander there is the right age. But it did not mention a middle name of Campbell.

So I decided to take things further and went to https://www.scotlandspeople.gov.uk and found Alexander's birth entry there:

I purchased credits to view the original document, which contains more information (such as actual date of birth, mothers maiden surname and date of marriage). He is certainly the Alexander Harris from the 1881 census log. 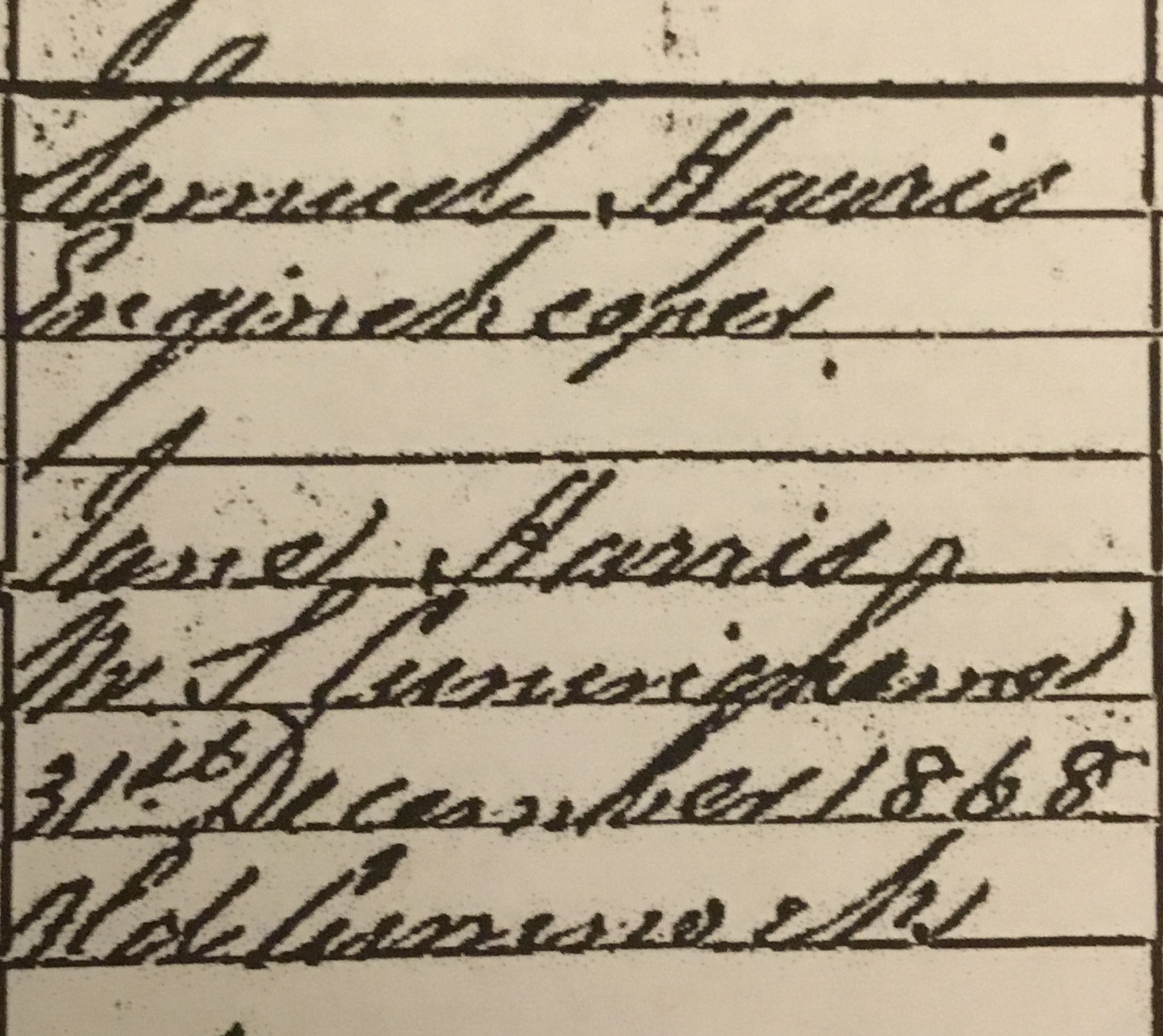 How can I know if this is our Alexander [Campbell] Harris? Is it possible that Campbell crept in later or is this not going to be the right person? 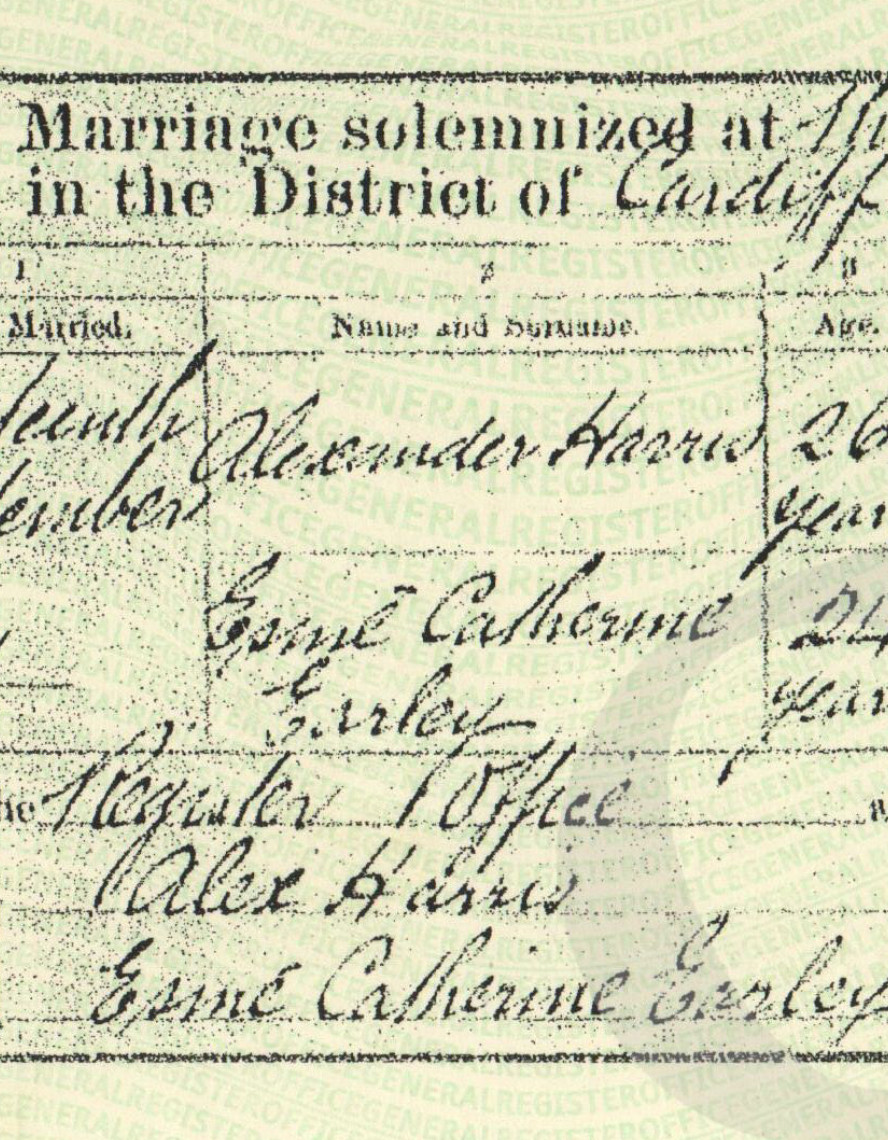 Another angle to consider

I wanted to add a spin on this. If you look here it discusses the clan Campbell. It mentions about Ayr:

The Campbell’s also held the Earldom of Loudoun in Ayrshire, which spawned a host of lairdships there.

The earliest parts of Loudoun Castle east of Kilmarnock /Ayrshire were built for the Craufurds in the 1400s. The castle was extended by the Campbell’s in the 1600s and again by Flora Mure-Campbell in the early 1800s into one of Ayrshire’s most stately homes.

So could that also be a reason why possibly Campbell was added by the family later in life? I say this because Irvine is in Ayrshire.

I have an 1841 baptism in Scotland followed by an 1864 Directory in San Francisco where the middle initial C creeps in for the first time. Subsequent records show that the C stood for Constable, his mother's birth family name. So that's one example of a name creeping in after baptism.

His elder half brother (my GG-GF) never had a middle name but when his 3rd wife died, years after his death in 1901, her relatives bestowed a middle name on him matching his mother's maiden name.

GG-GF's youngest daughter also acquired a middle name after her birth registration, presumably because she was named for her father's sister but they'd forgotten to add the middle name.

So it happens - but there's a reason for all those.

OK, I might have hit bingo on the definitive answer for why Alexander Harris (who was born in Irvine, Scotland in 1875) sometimes used the middle name Campbell.

I located the actual scanned images from ScotlandPeople website for the Harris family for the years:

Not yet reviewed 1871 etc because I ran out of credits. 😊

Anyway, after inputting the information into my family tree: 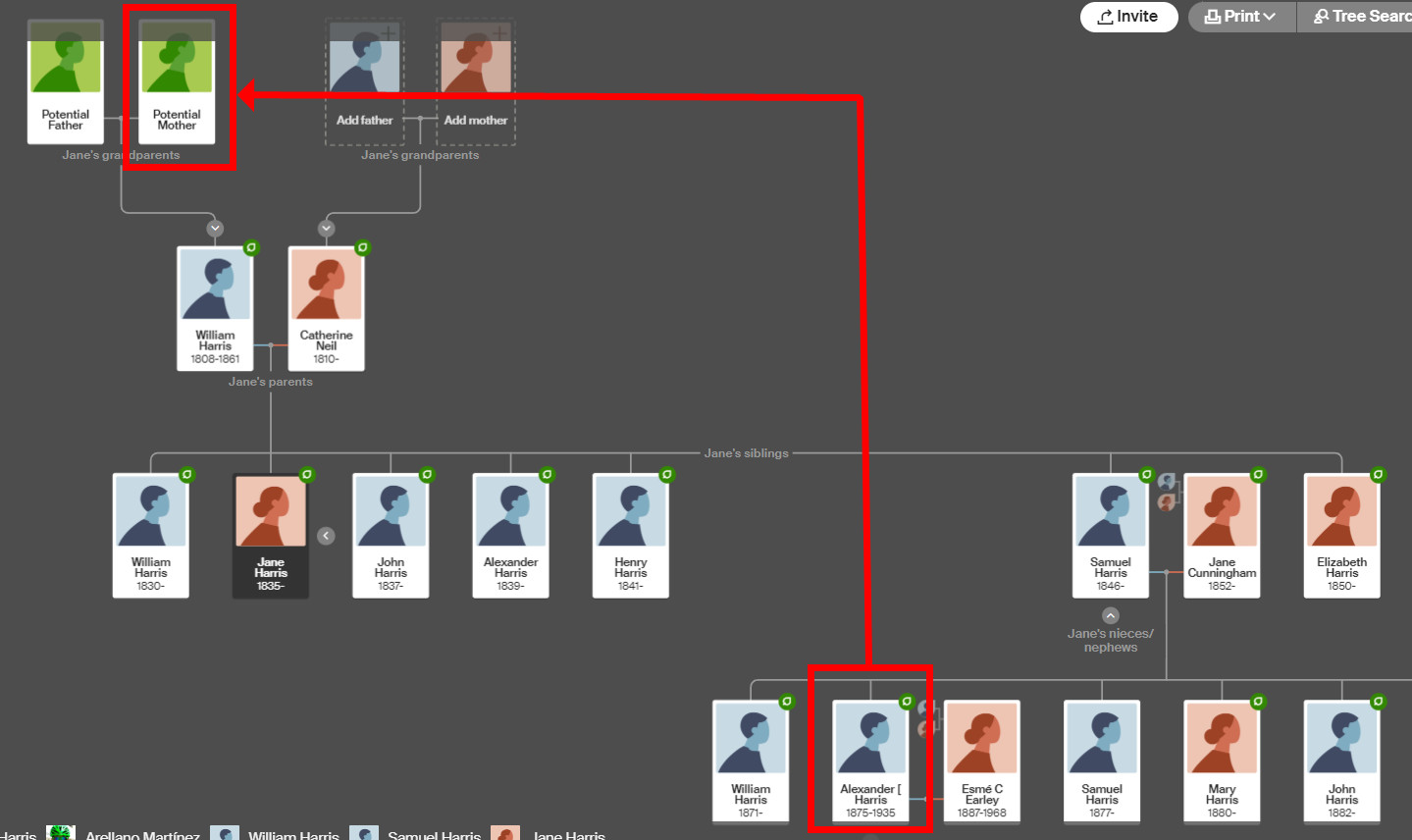 I started to get lots of hints, including potential parents for William Harris (who was Alexander Harris Grandparents). Look at the hint for his Great Grandmother: 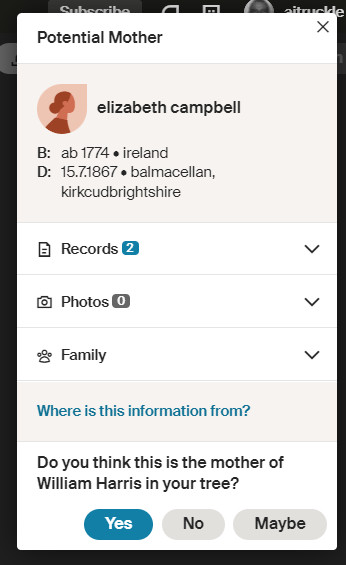 Her name is Elizabeth Campbell, born in Ireland. I admit that I have not thoroughly researched these latest hints because I don't like blindly accepting them, and I don't have a paid subscription anyway.

My gut feeling that this is the real reason why Alexander sometimes used this middle name. It was his great grandmothers surname. Now, as to the extra significance of her being from Ireland ... who knows.

I have since purchased the digital image for the death of William Harris on 31 May 1859 in Irvine and it confirms his parents were John Harris and Elizabeth Campbell.

This is the first official ancestor for Alexander [Campbell] Harries where this surname was used.

Suffice to say, I did not blindly add the proposed hint into my tree it I have added the parents names.

1
What is the connection between Campbell and Ayr?
3
Finding records of professional athlete and trainer who married 1911 at Cardiff, Wales?
2
Finding more information about Brecon Arms pub and when specific individuals had occupancy as landlords