I have the WWI registration records of my great-great grandpa who was supposedly born in Russia in 1890-1892. He emigrated to the US (Chicago) in around 1910, I think. The typed up transcript on their site says the town name is "Swel", but below is the actual image. I'd like to know the real name of that town, and what area/town of Russia that is today so I can see where he was from and maybe find out if any of his Russian family is still living today.

I've asked some Russians and they can't figure out what the town name's supposed to be, and then I read that "Russia" might actually mean Lithuania etc on old US documents.

Unfortunately I know almost nothing about him as clues, I want to know the town name in part so I can try to find out more about him. I think I heard that his dad was a potato farmer back in the old country while he himself was a carpenter. According to the census records he married a Pole (born in Knogness) who had two German parents, and according to my memories the two of them spoke "German" together. They passed down Russian, Polish and "German" to their children as first languages. Their maid at home was (I think) Polish.

In his obituary it seems at least one of his parents was Lutheran. I grew up with my great-grandpa being alive and he never mentioned his/their religion around me, nor did he call his German "Yiddish" (I also don't know the precise religion of my great-grandpa or his children either), but of course it's very possible one or both of his parents switched religions upon moving to the US, or that his dad knew Yiddish as well as German, or that he himself hid that he spoke Yiddish due to WWII stuff, etc.

I did some more searching around. I seem to remember he was a carpenter, if he was indeed from Zvil it said there was an unusually high number of carpenters who were Jewish. Also both the first name "David" (as was written on some results that were him, not "Daniel" as in the WWI record) and the last name "Meister" are apparently Jewish names. I also found a different person whose ancestors were from Russia/Polland with the last name Meister and it stated they were Lutheran too, that person was wondering if there was any kind of mass conversion from "Jewish" to "Lutheran" that took place at some point.

Here's the full image for the WWI registration record: 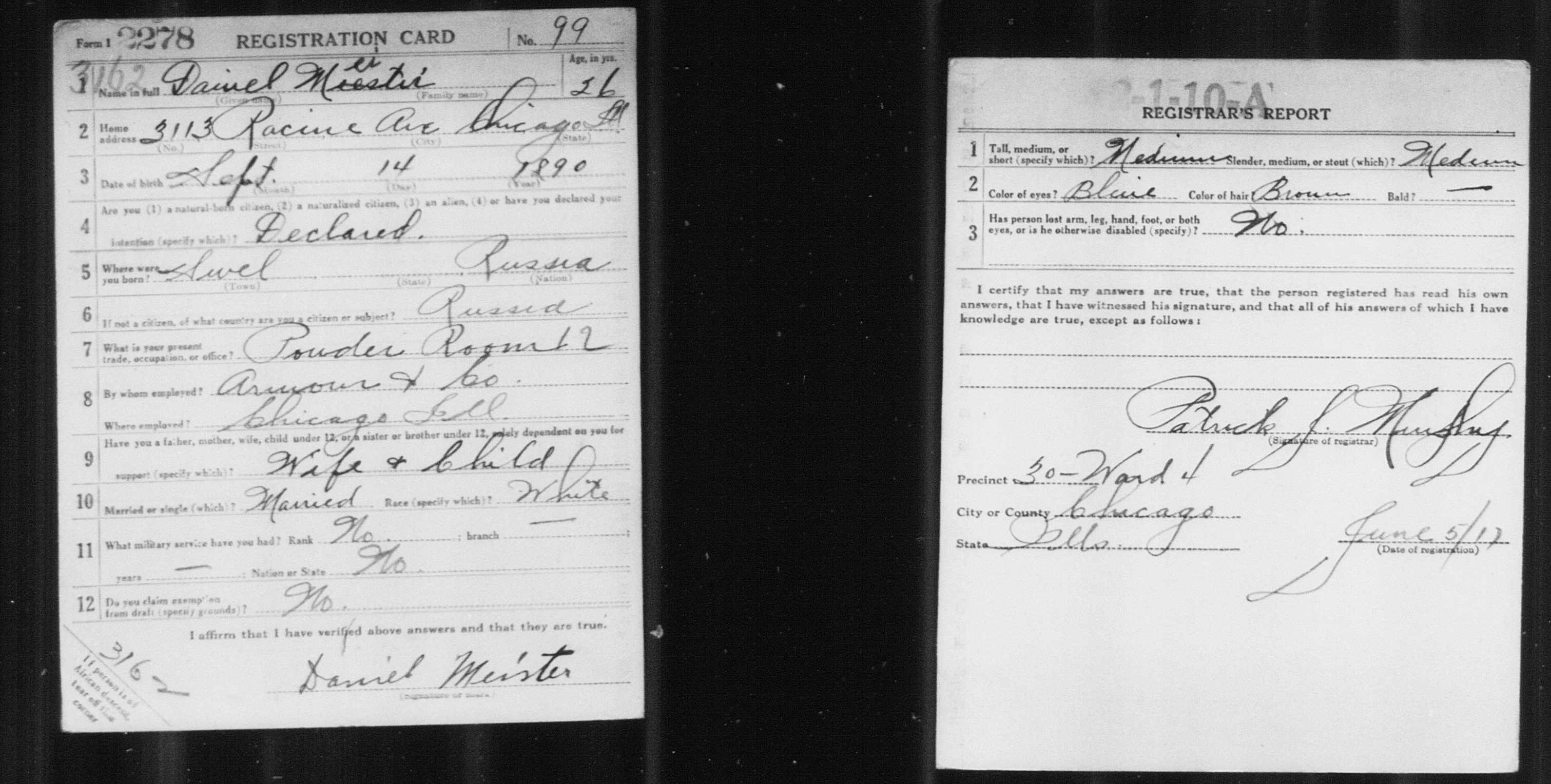 I looked up the house address on Google Maps, and from an old realtor ad it says "built in 1879", so this must be the original house he lived in in Chicago.

I think it is Новоград-Волинський, which is transliterated as Novohrad-Volyns'kyi, Novograd-Volinskiy, etc. and is also known as Zhvil, Zvil, etc. This is in the Zhytomyr Oblast in northern Ukraine. If this is the correct location, unfortunately there are probably no relatives left.

I searched on Fold3 for "Swel, Russia" and found two men in the WWII "Old Man's Draft" who claimed to have been born in Swel in the late 1880s. Neither one of these is probably your ancestor, but I'm showing you the process I followed so you can do something similar for your next query.

The first one is handprinted and clearly says "Swel" as the place of birth. The second one is written in cursive but appears to say "Swėl" where the E has a dot over it.

I searched on FamilySearch for other documents for both of these men. I had more luck with the second one.

Barnet Litman, b. Feb 22, 1887, was naturalized in 1913 in Chelsea, Suffolk Co., Mass., giving his birthplace on one page as Zvill, Russia, and on another page as what looks like Zutomir, Russia. His wife is given as Ida E.

In the early twentieth century, there was a town known as Zhvil or Zvil in Yiddish. It is also known as Novogrod-Volynsky and various other transliterations of both of those names. (That linked page contains a link to 19th century census records for Zhvil.)

According to Wikipedia, Novohrad-Volynskyi (Yiddish: Zvil) is a city in the Zhytomyr Oblast (see Litman's naturalization papers where this is transliterated as Zutomir).

Wikipedia notes that the Jewish population was 50% of the town around 1900, but many (most?) of the Jews were murdered either in the pogroms of 1919 or in mass executions in WWII.

Therefore, if this is the correct location, and your ancestors were Jewish emigrants from Zvil, it is unlikely that there are any relatives left in the town.

It could be Nevel. It would help to see the rest of the document, or other documents written in the same hand to get a better feel for the handwriting.

Edit: After seeing the whole document it is clearly not Nevel. The first letter is the same as the S in Sept. So Swel looks like a good transcription although it could also be Sivel or Sevel.

I've been researching my grandfather, who lived in Korets [now Ukraine] and emigrated to Boston, MA. In the early 1900s, a family in Boston, with the same surname as mine, reported their place of birth as "Zvill". I'm not sure they are my relatives but, Novohrad-Volynskyi is less than 40 miles from Korets.

These individuals are buried in the Jewish Cemetery in West Roxbury, MA. The name of the subdivision is "Zviller". I don't believe that's a coincidence to their origin.

[Apparently, back then, it wasn't unusual for lonsmen to purchase a burial area for multiple people from the same shtetl. My grandfather is buried in West Roxbury too but, his subdivision is called "Korets".]

Not the answer you're looking for? Browse other questions tagged russia world-war-1 jewish place-names ukraine or ask your own question.

18
What is the Russian town in this census listing?
6
Linking two brothers via gravestones
7
Can you identify this Russian town: "Chashvato, Podolski"?
2
Polish/Russian city Name from 1912 Manifest
3
Where would this town/area be located in Poland, today?
4
Seeking Russian Orthodox Church Records 1840-1900 for Lagody, Poland/Russia (now Belarus)?
2
Locating 1912 Russian town of Novoe Kurhane
4
Where was Kolashine, Russia?