She was born in 1858 and according to the entry the place of birth was: 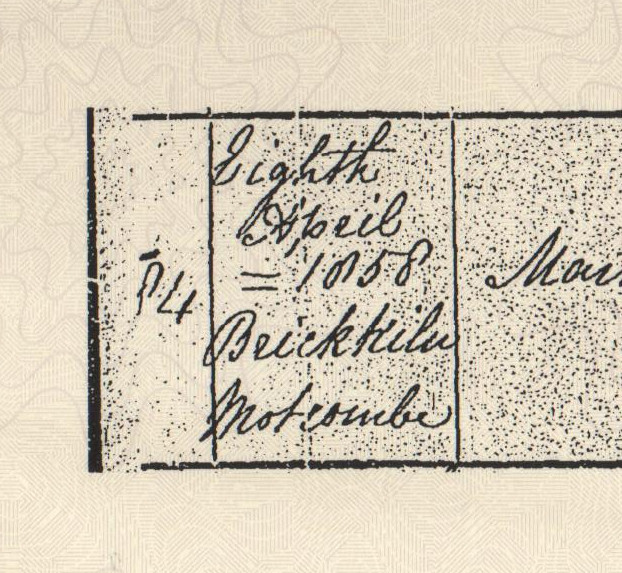 The registration district was Shaftesbury in the county of Dorset.

I have tried to research Brick Kiln and located this website. It states:

But this doesn't tell me much about this actual area. Subsequent searches take me to a cottage: 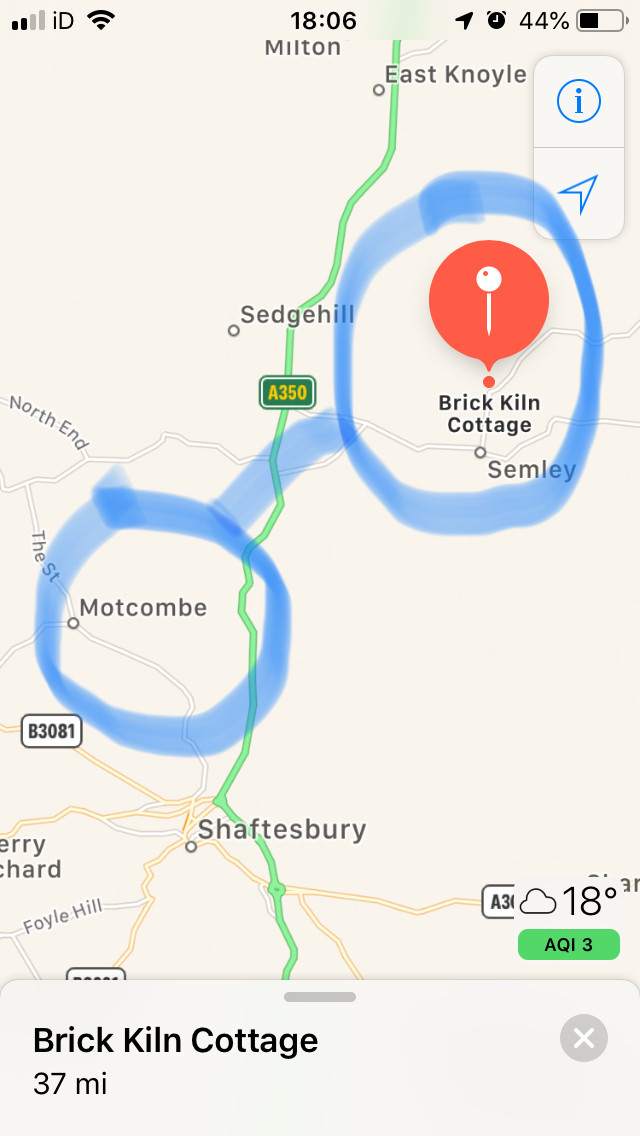 I did come across this interesting article which includes audio narrative and in part it states:

David Preston has researched Enmore Green’s brick industry and he was keen to show me some of the historic records related to the brick kilns, which once operated around the village. “The one at Hawker’s Hill is well known and there’s a fair amount about that because it went on for much longer. Nobody knows much about the Long Cross one, and the brick kiln on Buttermilk Lane though,” said David, adding, “Brickworks are essentially a bit ephemeral. They are usually on farmland so if the brickworks closed down, the farmer cleared it away. There’s not much left.”

These brickworks were situated at the bottom of the hill, below Shaftesbury, because that’s where the clay lies. David reckons that there were possibly a dozen brickworks in operation. “It wasn't a huge enterprise and it was a bit seasonal because brickmaking was weather dependent. You needed to be able to dry the bricks so there wouldn't be much going on in the winter.” The industry started here in the Georgian period. “It was in the middle of the 18th century. They did it for about 100 years,” David explained.

Brickmaking would not have been a major source of employment in Enmore Green. “You do find in early records that people were described as brickmakers but not very many of them. Most of the people would have been agricultural workers and there were a lot of cheesemakers or cheese dealers, for some reason.”

The road on which St John’s Church is situated is now referred to as Church Hill. But its name used to refer to the brickmaking industry. “It was known as Brick Hill,” said David. “It seems to have changed around 1910 because that’s when some people give their address as Church Hill and others give their address as Brick Hill in the school admissions. Presumably it was because it was more relevant to call it ‘Church’ rather than ‘Brick’ Hill.”

You can spot the local bricks, if you know what you’re looking for. “There is a distinctive type of Shaftesbury brick. It’s red with blue ends and you can see some of them on Bell Street.” The thatched cottage on that town centre street features this architectural detail. “Those would have been bricks from Long Cross,” explained David. “The blue was something to do with the way that they fired them. It sometimes depends on the type of sand or clay that you are using to make the brick in the first place.”

Since Enmore Green is heavily associated with Motcombe, it would seem to me then that "Brick Kiln" was just a specific kiln there in the village. That said, the audio refers to a map of the kilns but I do not know where to find that.

There is also a specific reference to a Brick Kiln here: 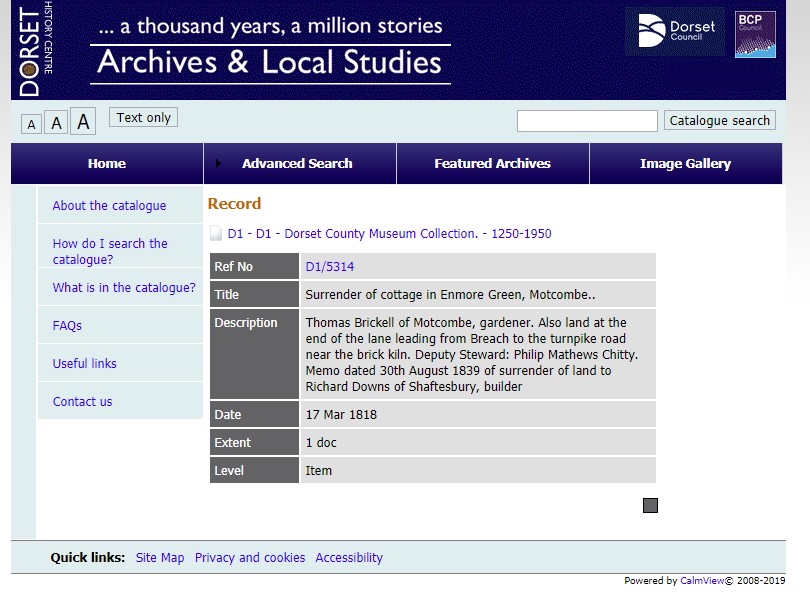 This could be related to this issue?

The brickworks and kiln were located just south of Motcombe Park, as shown on this 1890 OS map: 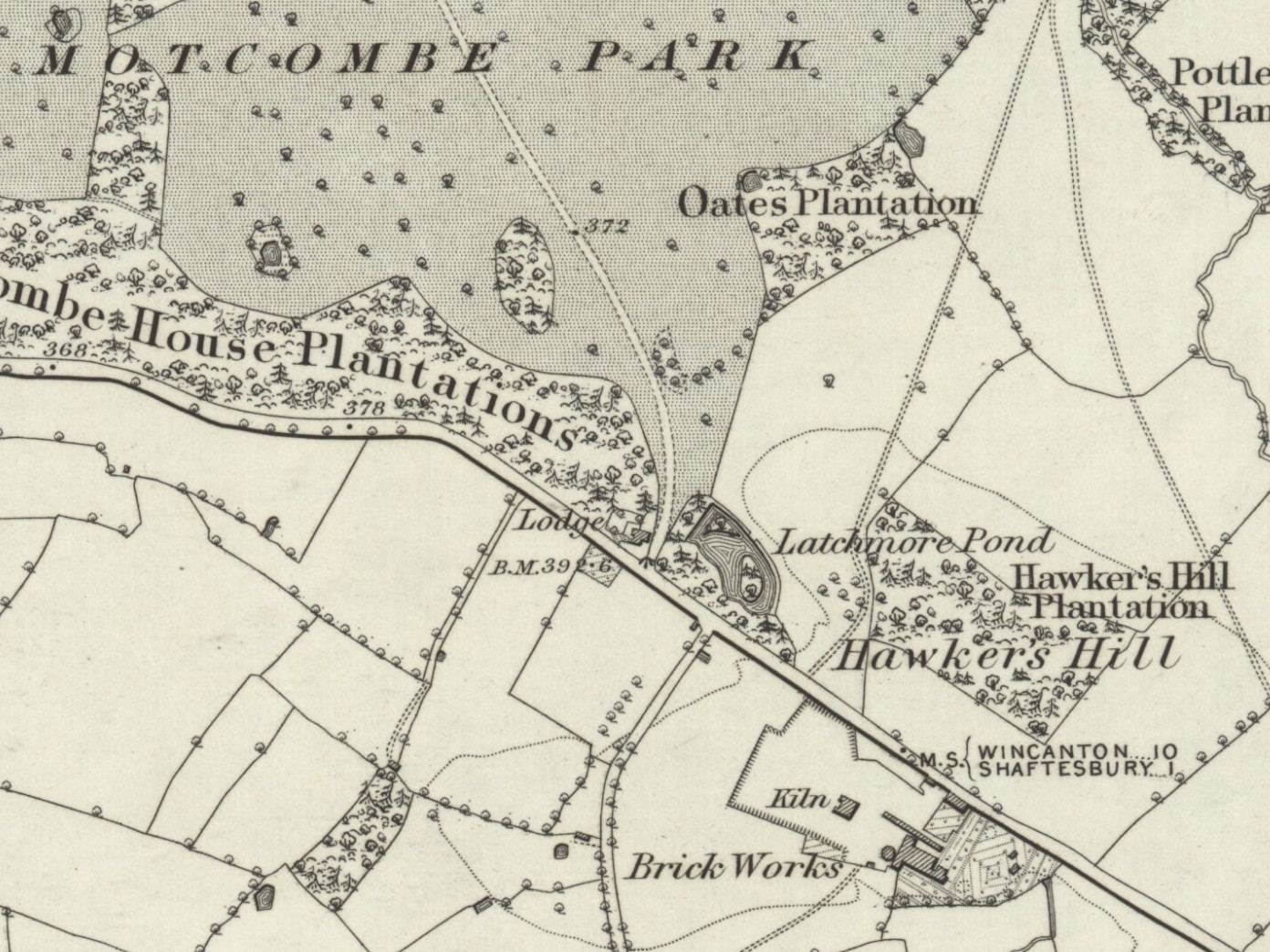 See the National Library of Scotland website to view this and other historic maps.

Not the answer you're looking for? Browse other questions tagged england birthplace 1850s dorset or ask your own question.

8
Why was Flossie baptised twice (1898,1903) at Stalbridge, Dorset, England?
5
Does this headwear tell me anything about the individual wearing it?
9
Landowning in Eighteenth Century Gloucestershire?
7
Finding Devon parish marriage records?
2
Did Richard Hill and Blanche Todd live in India in the late 19th Century?
2
Finding where a marriage took place from the GRO index reference?
11
How can I distinguish between name changes and missing records?
1
Could Francis Tolvert Greenway baptised 1774 at Falmouth be Francis Green who married Grace Woodley 1798 at Totnes?
7
How should I interpret this sequence of records?
6
Why doesn't my research meet the Genealogical Proof Standard?