I have a question re the use of abbreviations in Ireland perhaps on a broader scale too with other countries too. Attached is an image of a signature which looks like James Byrne on a marriage cert (of my great grandmother) for Esther as a witness to the marriage in Dublin (Kingstown then, now Dun Laoghaire) 1903. My problem is that I believe her father may be a gent named Garrett and James may be his relative as in brother and stand in who is listed under the parent section but who may have been present at the registration. I have checked register abbreviations in Ireland and UK but have had no luck...maybe someone has insights on this, to me it looks like E1=James Byrne....in joined script? 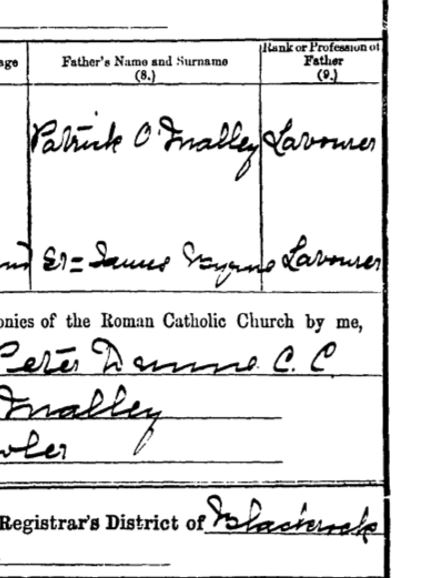 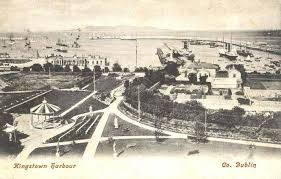 I think it is "St." from the address "Cumberland St.", which encroaches on the next box. The bar of the "t" is detached, as in "Cottages" in the groom's address, and the dot is elongated, so that it looks like "S=" overall.

If you look at "St Patrick" on the top line of the full certificate, the overall form is the same, except it doesn't have a dot/line after.

Edit: I've snipped out the examples of "S" and "E" from the certificate to compare with the "mystery" letters:

This sort of comparison with other parts of the text can often help with identifying an unknown letter. By looking at letter shapes, and the path that the pen took, you can often whittle down the options and reach a clear conclusion.

I think it's clear that the first letter of the clipped unknown section is formed in the same way as the "S" - it starts at the top right, follows a typical "S" curve, forms a tight loop at bottom left and ends at bottom right. The "E" starts centre left and loops around before descending, and does not have the tight loop at bottom left. "S" and "E" are quite distinct characters when blown up like this.

The second letter could be a "1" or an "i" or similar, but the overall form of the vertical and the upper dash does resemble "t" in the rest of the text. If you cover the lower dash with your finger, the rest does look a lot like "St" in the examples. And when you add in the information about "Cumberland Street" it seems quite likely to be "St" encroaching from the previous box.

That does mean that the lower dash is something else, rather than forming an equals sign (which is not something I've seen on such records before). I am supposing that it symbolises the contraction of "Street" to "St". Customarily that's a dot, which may simply be elongated here. Or the writer may have used a dash to signify the same thing.

If you're still unsure, it may be worth perusing other records in the set, if available, to see if the writer used similar forms elsewhere. As @HarryVervet points out, this entire certificate appears to be written in the same hand (it's a copy of the original) so there's a decent chance the same person wrote multiple copy certificates in the same time frame.

I agree with Andy's assessment, that the mystery abbreviation is the "St" from Cumberland St.

I know very little about the archiving process of Irish marriage records, but I would add that this appears to be a copy of a register, rather than the original. All text including signatures are in the same hand. There will be an original document containing original signatures, usually archived with the church itself or a local archive. Although in this case I think the problem is solved, it would be interesting to compare the original register to this copy of the document. The original may be in a different hand which could be easier to read, or have all the words in their appropriate boxes.

Not the answer you're looking for? Browse other questions tagged marriage-records ireland abbreviations or ask your own question.