On my parents marriage certificate it says that my mums profession was a Batswoman: 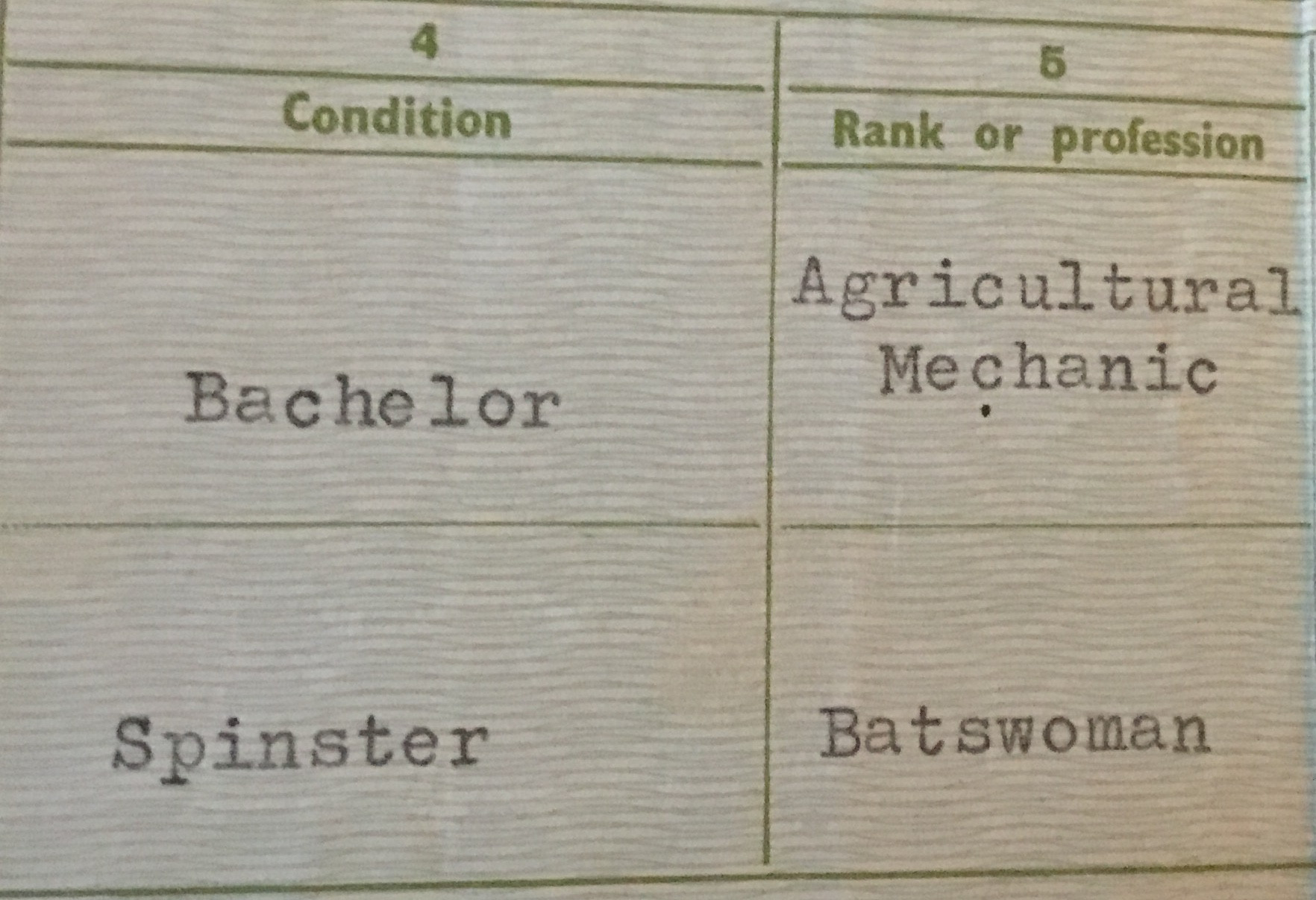 The year is 1963 and the location Warminster, England.

My mother tells me that at the time she was a carer for a child. I guess a bit like a nanny.

So why this term? My mum said it was like a guy who buffed crockery etc. But when I search the word it is related to cricket.

Based on this reference work originally referred to by @ColeValleyGirl in her comments to my question it states:

A batman or an orderly is a soldier or airman assigned to a commissioned officer as a personal servant. Before the advent of motorized transport, an officer's batman was also in charge of the officer's "bat-horse" that carried the pack saddle with his officer's kit during a campaign.

My mother was not officially in the army or anything so the above does not strictly apply in her case. However, if you look down at the section about the United Kingdom it states:

In the British Armed Forces, the term "batman" or "batwoman" was formerly also applied to a civilian who cleaned officers' messes or married quarters. In the Royal Air Force, free married quarters cleaning services were phased out for all officers except squadron leaders or above in command appointments as of 1 April 1972.

My mum was more of a child carer but it was for a high up military official. So I now understand why the term Batswoman was used on their marriage certificate.

Given the following references, it appears that batswoman is probably a typo or misspelling of batwoman, which is a woman employed to maintain a household (sweep, clean, fetch things, run errands).

A 1943 contemporary account of the fall of Tunis, The End in Africa, by Alan Moorehead, contains the following passage that implies a batwoman is a kind of household attendant:

We ran on back to Gafsa, where we had established ourselves in a comfortable Arab house. It even possessed a wood-burning bath-heater, which provided the only hot baths we were going to get for the next two months. Since luxuries were to be had in that pleasant place, I hired, in the absence of a batman, a batwoman. Hyah was without glamour. She was an aged and hideous Arab crone who swept the floors and handled the laundry.

n. one who has charge of a bathorse: an officer's attendant

It gives as an inflected form:

A Dictionary of Slang and Unconventional English from 1953 tells us that a slang term for batman or batwoman is batty, relating to the Services, and that the slang term dates from about 1925.

The 1972 Supplement to the Oxford English Dictionary defines batwoman as "a member of one of the women's auxiliary services performing the duties of a batman." For batman, it says "Add: Now generally, an officers servant" and gives a source from 1755 (a letter to Colonel George Washington)! A 1955 source in the same entry says "Men employed as outside batmen in the married quarters were expected to clean and polish the houses, clean windows, cut lawns, fetch coal, and run errands."

1955 Times 18 Aug. 5/1 Men employed as outside batmen in the married quarters were expected to clean and polish the houses, clean windows, cut lawns, fetch coal, and run errands.

Not the answer you're looking for? Browse other questions tagged england marriage-records profession 1960s or ask your own question.

14
Are parents listed on marriage certificate “proof” of parentage?
2
What is occupation that looks like “Pre MJ” on 1841 census from Cornwall, England?
3
Why would Consent of Parents be needed for 1815 marriage between 26 and 33 year olds in Menheniot, Cornwall?
3
Finding Marriage Certificate/License most likely in 1930s Michigan?
3
Does Cause of death being Convulsions suggest Cholera?
5
Conflicting names of ancestor's parents from different records?
5
Deciding between multiple birth names and dates?
4
Did my potential ancestor lie about his wife dying so that he could marry again?
3
What is the house number on this 1891 Census record?
10
Why would the ages on a 1877 Marriage Certificate be so wrong?