Alien Passenger (1917) who became Relative to be joined (1920): how to reconcile address discrepancies?

From a previous question it was noted that a certain Alien Passenger arriving at Providence RI in 1917, gave as an Address of a female cousin to be joined:

From another two columns (State and City or Town) from the same Manifest we have:

The interpretation I make is

respectively. Please note that the Central looks like it was corrected (C. replaced by Central?). 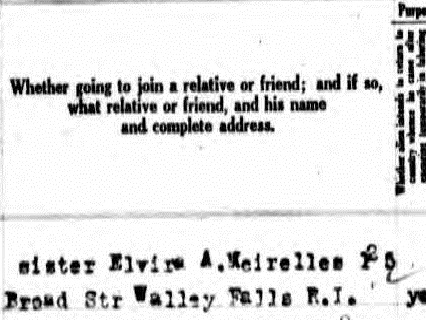 So, we have again a

but this time in

There is also a number (?) in the end of the first line that is imperceptible to me.

One reference I could find for Valley Falls is

Are we talking about the same address? The same place in Rhode Island? The mentioned imperceptible number, what does it mean? And Central being corrected?

6
What is written in this excerpt from a Manifest of Alien Passengers for the US arriving at Providence?

14
Locating New England telegraph man (Lemuel Keyser Preston) ca1850?
7
How do I find a Canadian address that appears to go missing between Censuses?
6
How do I find passenger lists for ships embarking from Mexican ports to California?
4
How to find address of building in New York State censuses (1870, St Lawrence, USA)?
1
How to Decipher U.S. Passenger Manifest Text?
4
Finding William Hudson Minnick from USA who in 1920 married Cecilia Mallon in Liverpool, UK?
4
How to locate 1860 United States census pages by address?
5
Who was in Edingley Cricket Club in 1920?