Is there a federal government office that could provide information about a US civil war/military headstone?

I discovered that a Civil War ancestor has a relatively recent headstone that is actually for a distant cousin with the same name. I'd like to know what government office handles these and might there be records of requests and the disposition of said requests.

They will be able to guide you thru the process- which may involve being sent to another agency within the government.

As with most dealings with federal agencies, the process will be neither quick nor painless.

First of all, if there is a cemetery association or modern-day business office that handles the affairs of the cemetery, I would start there to find out the date that the stone was placed, and to get any information available. (You may have already done so, and this might be what prompted your question -- I'm adding this note for the benefit of others who might read this answer.) Your question does not say if the stone was paid for by private means, or if it was provided by the Department of Veterans Affairs. It may be faster to find out by talking to the cemetery than by making a FOIA request.

I'm also going to assume that by "recent" you mean, closer to the present day than the timespan of the record collections available to be searched online, such as the collection on FamilySearch, United States Records of Headstones of Deceased Union Veterans, 1879-1903. or the applications for headstones which can be searched at Ancestry.com:

If the headstone was placed during the period the Ancestry database covers, the application form will show who made the request. Ancestry's database descriptor says that their database goes through 1963; if this is true (and not merely a sign of a description that needs to be updated) then perhaps more records are available at the National Archives offices. Consult NARA on how to access RG 92 to see records from 1963-1970. See Records of the Office of the Quartermaster General Series Title List to get an extensive list of what records are available in this record group.

For records which have not yet been turned over to NARA, requests need to be made to the agency which still holds the records. Records generally become archival after a certain amount of time has passed, and NARA should be able to advise you of the current cutoff date for which records are archival.

In the comments on a post Civil War Vet gets Tombstone after 100 Years on Dick Eastman's Online Genealogical Newsletter, one of the EOGN readers posts a link to his personal website, describing the process of getting a stone. He and his cousin wrote the Veterans Administration. See Finally, a memorial for my Civil War ancestor.

But bulk requests like this done by groups unrelated to a veteran have let to a controversy which resulted in new regulations about who can submit an application -- Effort to Mark 1,200 Unmarked Civil War Veterans’ Graves Hits Snag (Genealogy Bank blog).

The FAQ on how to make a FOIA (Freedom of Information Act) request from the Department of Veterans Affairs is here. Following the links to the page Other Types of Records Requests it says:

The VA has a decentralized system for handling FOIA requests. All FOIA requests should be addressed directly to any of the approximately 400 geographically-dispersed components that may maintain the records you are seeking.

If you know the office that maintains the records you are seeking, you should write directly to that office or contact the VA Central Office FOIA/Privacy Act Officer for the custodian of the record.

The office in question is the National Cemetery Administration:

The National Cemetery Administration (NCA) handles records related to the construction and administration of VA cemeteries, the furnishing of Government headstones or markers, the administration of the Presidential Memorial Certificate Program, and the issuance of grants to States for State veterans' cemeteries.

Ultimately, the responsibility of National Cemeteries falls to the Secretary of War by Federal Law. 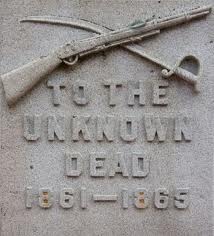 The Link provided below should explain quite a bit

To Add to @JanMurphys original 2013 answer about some applications for headstones being on Ancestry.com.

Fold3.com (an Ancestry.com site) has repository for applications with images as well as images from the original National Archives collection of U.S., Headstone Applications for Military Veterans, 1925-1963.

Most of the applications I have been able to find on both sites but slightly higher hits on Fold3 but that might just be the search engine on each site.

Ancestry: Search, then go to the Military sub-category Fold3: Search by Name, then go make sure you are all on 'All Records'.

but to come back to your original question.

The department handling the applications at the 'time of application' is located on the back of the card. In this 1962 example below it is:

Today in 2015 it is the Department of Veterans Affairs.

The great thing about these applications is you get to confirmation of some details of their military service (from the notes) as well as where they were buried. There is two sides to each card and this is a sample. 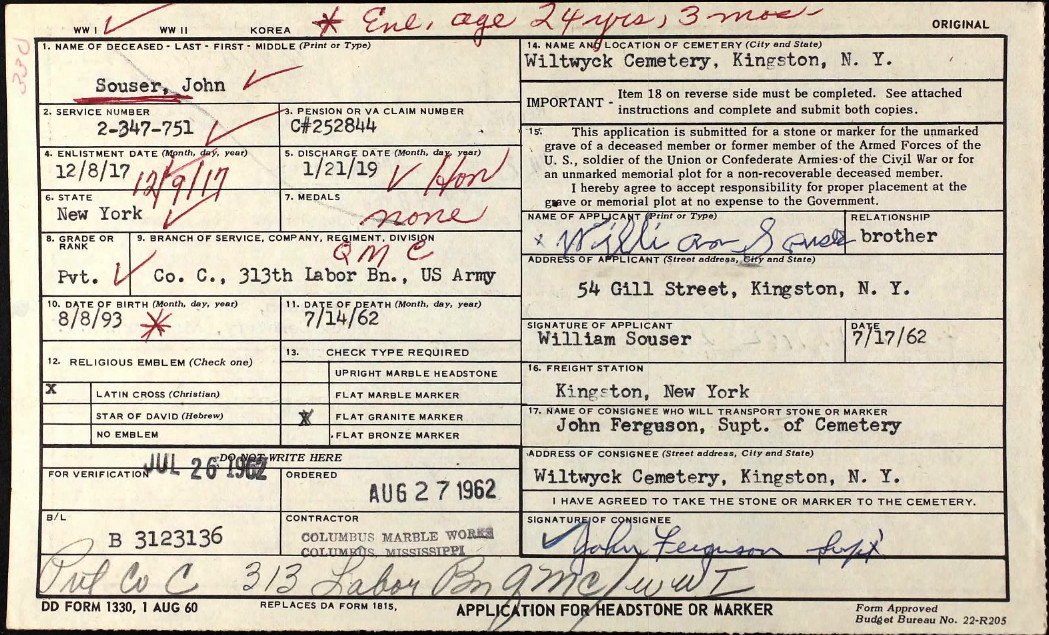 4
Finding birth record for William R Rediker who was born ca 1832 in USA?
14
Determining whether soldier in US Civil War was German mercenary?
4
Records for 'aide' to officer in US Civil War
8
What was the "Old War" and how should I interpret this pension index card?
6
Kit Carson & John Fremont expedition members
7
How can I ensure that I am making a reasonably exhaustive search?
4
Finding TNA Discovery catalog entries for digital images on Ancestry?
4
What happened to Gustav Adolf Neumann, 1859 immigrant to the US?
1
Compiler / Author of printed Landowner record books in England and Wales?