Here is a photo of my late father (passed away earlier this month) driving a tractor: 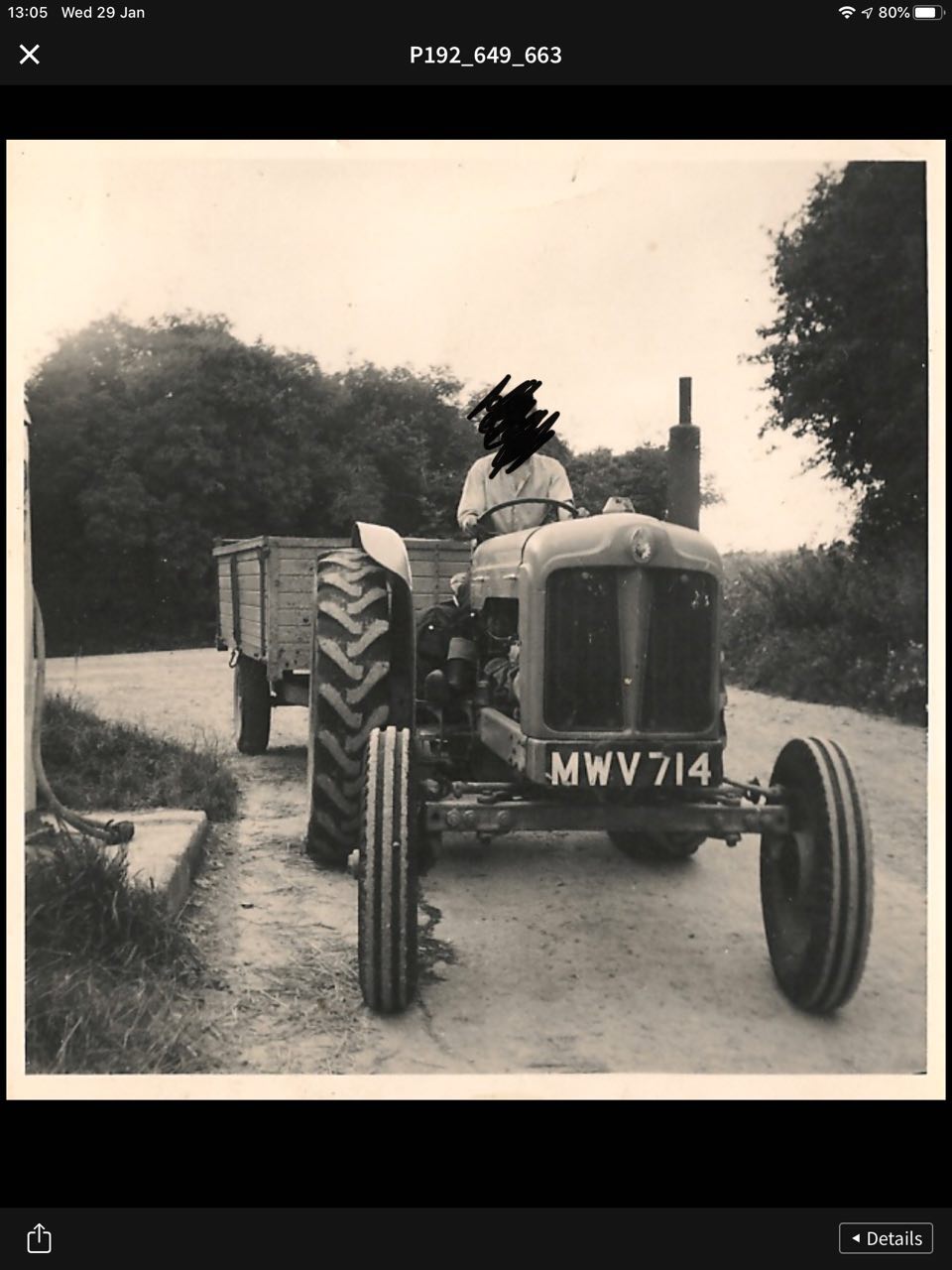 Dad would have been driving this tractor in Wiltshire, England. I had a look at this website where it states:

Am I correctly assuming that this is a M registration vehicle? Given the fact my father left working on a farm in November 1974 it would put this photo in the time period 1973 - 1974.

Can anyone shed more light on understanding vehicle registrations from this time period?

No, this isn't an M registration vehicle. The 'M' for the registration year was at the end of the number (e.g. 'URX 465M'). The tractor shown in the photograph would have been registered before 1963.

From the page on Suffix Registrations, linked from the article you cited,

"Prior to 1963, registration marks were dateless".

We can, however, narrow the date at which the tractor was registered a little.

From the Wikipedia page on Vehicle registration plates of the United Kingdom we see that:

The first series of number plates was issued in 1903 and ran until 1932, consisting of a one- or two-letter code followed by a sequence number from 1 to 9999.

By 1932, the available codes were running out, and an extended scheme was introduced. This scheme placed a serial letter before the code, and had the sequence number run only to 999, thus restricting the number of characters in a registration to six.

So it appears that the tractor in the picture was registered between 1932 and 1962.

It may be possible to narrow the date still further if you have an idea of where the tractor might have been registered (indicated by WV in this case), but as the Wikipedia article makes clear, this can often be a non-trivial task as subsequent codes

"... were allocated on a first come first served basis."

For Wiltshire, it looks like the early registers of vehicle registrations are held by the Wiltshire and Swindon History Centre, who have a blog article titled Early Motor Vehicle Registration in Wiltshire on their website which you might find of interest.

As @sempaiscuba says, this registration is pre-letter codes, and the pattern restricts it to 1930s to 1963.

However, you can get a bit closer from the tractor itself: a very quick image search shows that according to Country Life's article Top 5 vintage tractors it is a Fordson, introduced in 1952. So, sometime after 1952 (it doesn't look brand new) and 1963.

The tractor registration MWV 714 is definitely a Wiltshire County Council issue from 1955.

My father bought a new Ford Consul Mk.1 in Wiltshire in about July of that year, registration MWV 535, so as numbers were issued sequentially this would date the tractor registration as probably 2 - 3 months later i.e. about September 1955, which seems to tie up with all the other facts.

Not the answer you're looking for? Browse other questions tagged photo-dating 1970s wiltshire or ask your own question.

29
Estimating year photo was taken or printed?
8
Help determine date of photo from Tuscaloosa
5
Could photo be Edward Nettell (1812-1879) and Maria Hocking (1811-1902) of Illogan, Cornwall?
5
What year does this toy tricycle appear to be?
5
What is the date and rank of this photo of a British soldier?
1
Dating photo of train station depot in Mertzon, Texas?
2
Dating photo of family members in front of house in Texas?
7
What is date of the photo of woman with wrist watch?
0
Establishing the location of a photo in Fisherton-De-La-Mere