The green "Immigrant Identification Card" issued by the United States Department of Labor includes an immigration visa number, a longer red number, and in this case, a stamped black number on the front of the card.

What do each of these ID number markings represent? Are any of these a file record or file number? 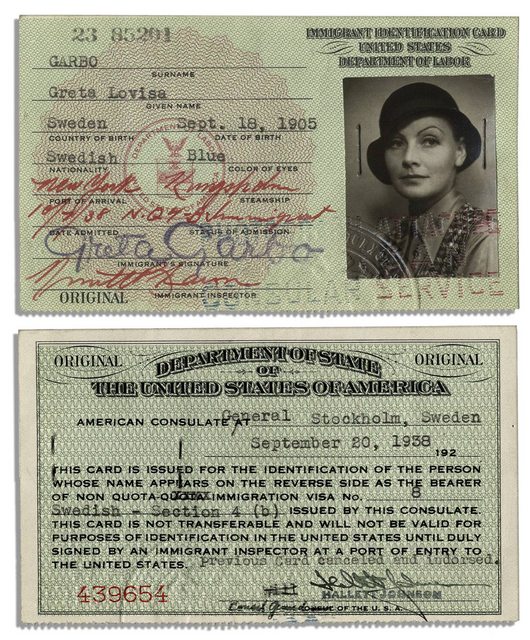 The red number stamped on the back is the Immigrant Identification Card number, which was also issued by the State Department when they issued the immigrant visa. These cards began to be issued along with immigrant visas in 1928, and were created in duplicate. One copy was “lifted” upon admission at the port of arrival and sent along with the visa document to the INS, now USCIS, in Washington, DC. The other was given to the new immigrant as proof of their lawful admission. Note the card is green. They were issued until ca. 1944, and replaced by the INS form I-151. This number does not relate to any other file or document. The card should have been surrendered to naturalization officials when she naturalized, but some immigrants managed to keep their copy in their possession.

The black number stamped at upper left on the front can be considered an “annotation” related to later naturalization activity. Ms. Garbo apparently applied to naturalize in District 23 (Los Angeles District). There is no date included. Google indicates she was naturalized in 1951 in the US District Court in Los Angeles, CA. Her Declaration of Intention says she filed Certificate of Arrival number 23-85201 in support of that declaration.