I've traced my family tree to the 1700s Yorkshire, England.

Thomas Fowler B: Abt. 1744 England Marriage: 1766 Stillingfleet to Jane Hare, Yorkshire and he was living in Thorganby at the time

Thomas' decendants were all from Thorganby, Yorkshire, England. I looked on both Ancestry and FindMyPast and I could not find any matches for any Fowlers before 1744 in this town so they must have been from somewhere else. I also could't find any matches for Thomas Fowler either. He probably wasn't born in Thorganby in that case.

I took a look on FindMyPast and I found two good matches! However, I don't know how we are going to decide which one is the right one.

I found one match from Nether Poppleton and one from Fulford. Fulford is closer to Thorganby but I think there could have been a road either way. 1744 matches the marriage certificate better. John is a new name in our line but Robert is not.

How can I make this decision?

I followed the suggestion in the answer. Here's what I came up with:

What records are available for Thorganby?

How is that the correct marriage? Was the only marriage record +/- 10 years in Yorkshire where a Thomas Fowler married a Jane

There is one record match for 1744 which matches the marriage record. 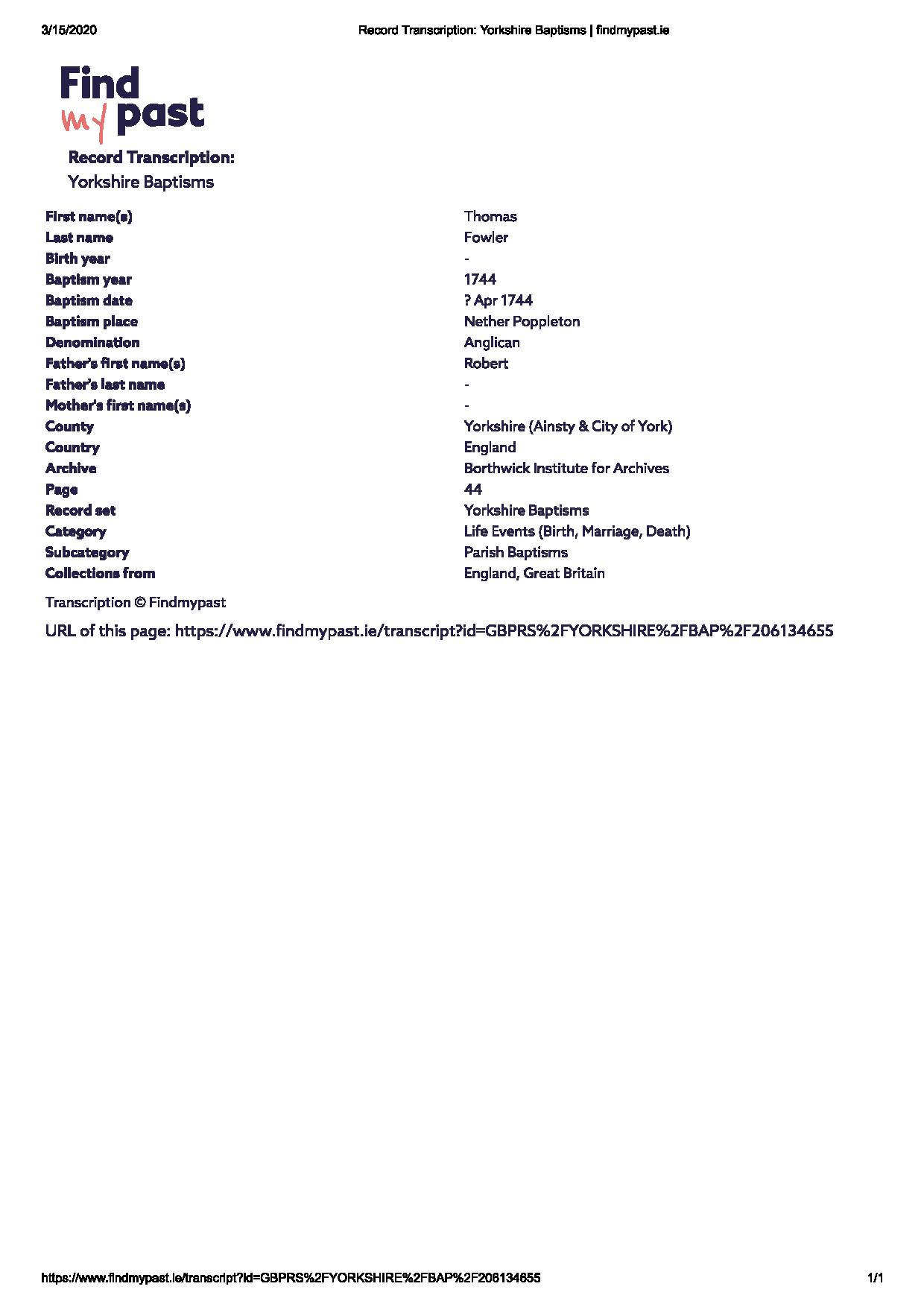 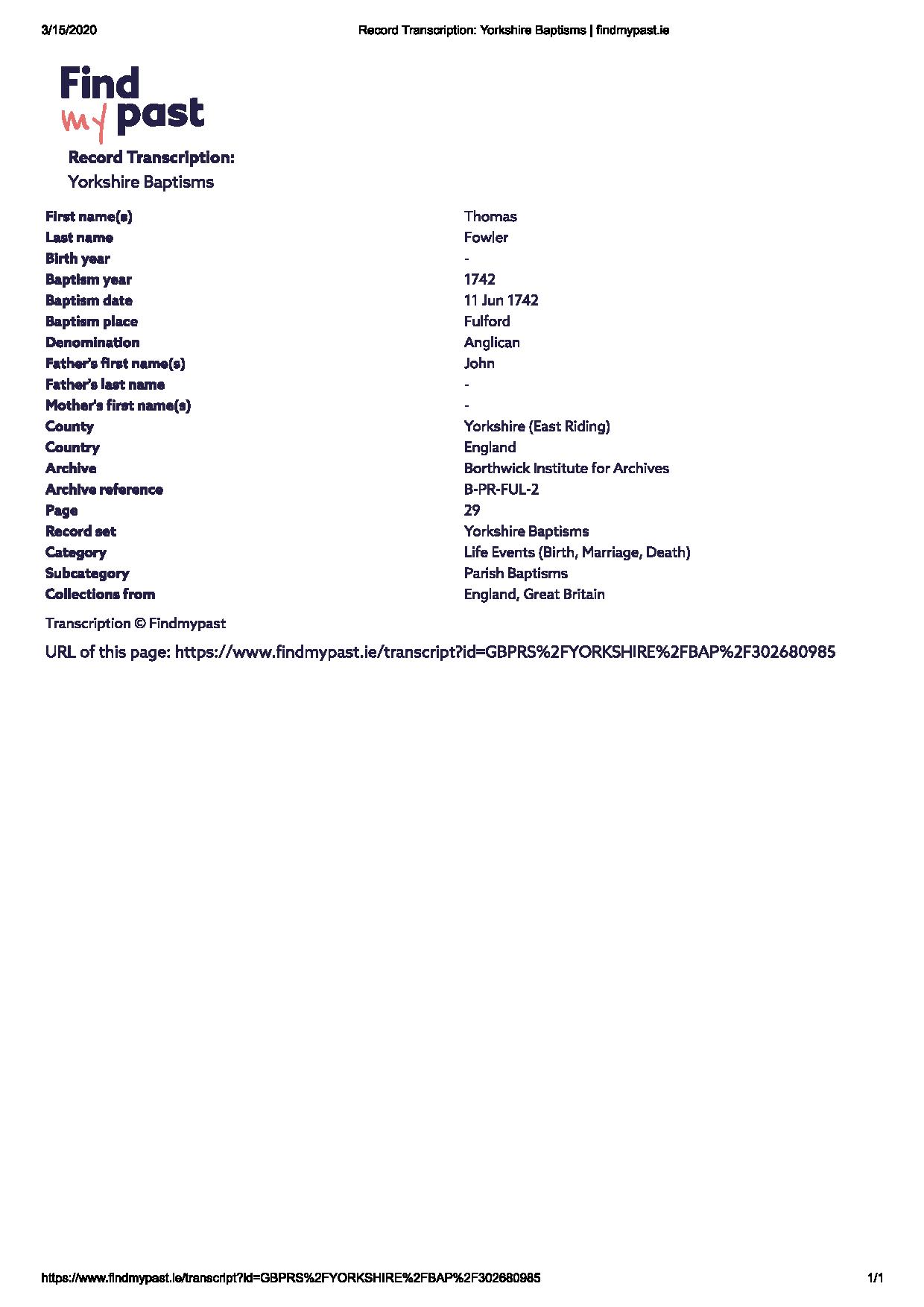 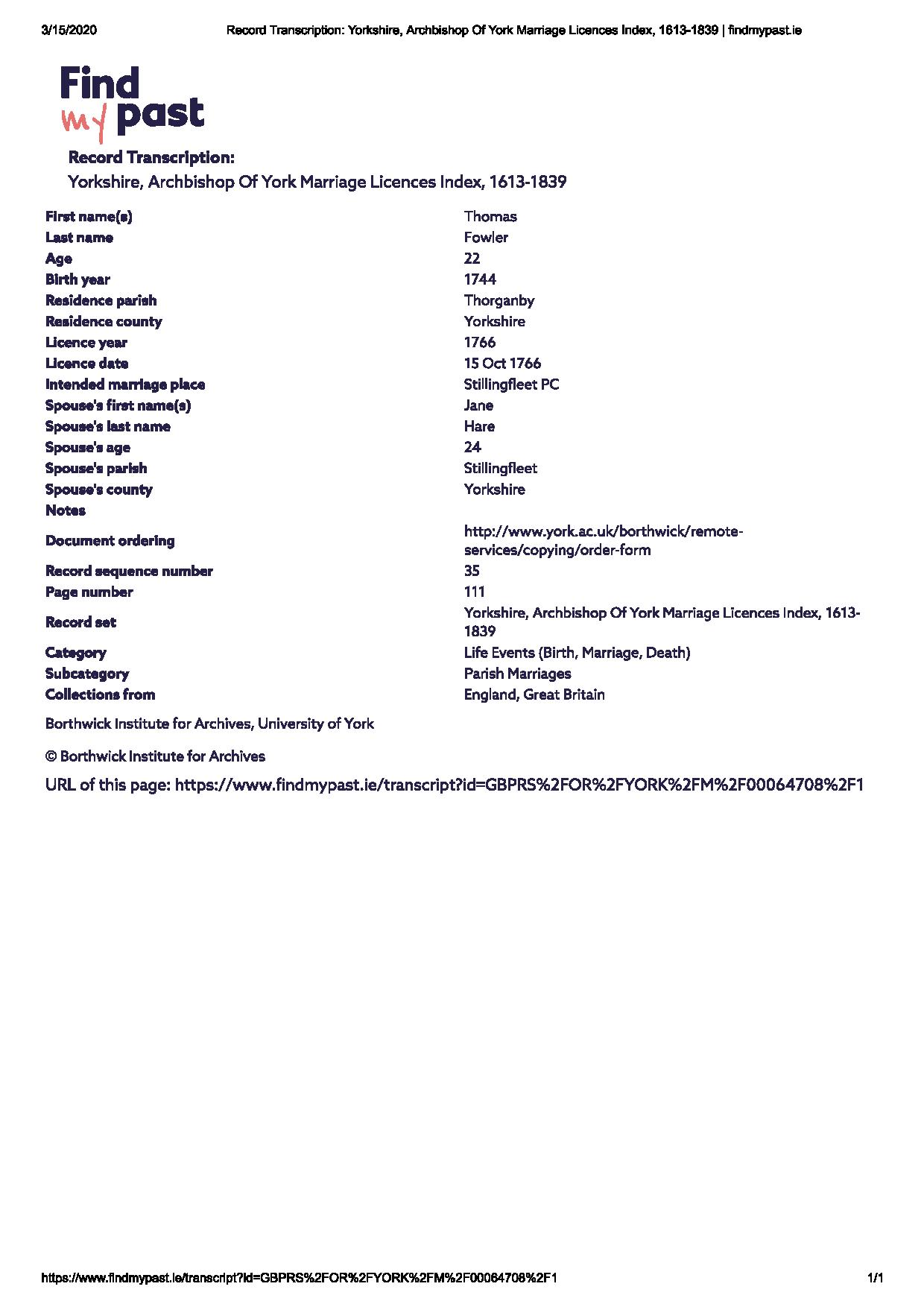 As a fellow rookie, one trick the others haven't mentioned, is to search the marriage registers in the parishes of Thorganby, Nether Poppleton, Fulford and Stillingfleet in the years 1740-1780 for marriages and marriage witnesses in the names of Hare and Fowler.

That's the best way to build up a reliable FAN network - unless your man was a church warden - he may turn up witnessing the marriages of friends, relatives or neighbours. Also, published Monumental Inscriptions may have several generations inscribed on the same gravestone or relatives listed in nearby plots.

The witnesses for Thomas Fowler's marriage and the marriages of his children unless acting in a professional capacity - e.g. Church Warden - would also be members of the FAN Club.

The Yorkshire parish collections are split between Ancestry and FindMyPast.

FamilySearch are currently indexing Yorkshire, Marriage Bonds & Allegations (Licences) - if the images are available to view online then you could try browsing for the relevant entry otherwise you could order a copy from the Borthwick Institute for between £5 and £10. This should give an occupation for Thomas and the name and occupation of any fellow bondsman (a FAN member) unless a John Doe.

Try searching Fowler [+ Parish] in the Borthwick Institute and other Yorkshire ROs'catalogues.

FamilySearch will usually have microfilmed most of the parish chest / land tax type documents. Further documents may be kept at the appropriate Record Office or occassionally at the church itself.

I have two instances - although one may be a clerical error - where searching over several years of land tax and manorial records one person with an unusual surname was seemingly replaced by someone with the same surname. One of the parishes was large enough that the quit rents for the manor were arranged under the street name - the surnames of some neighbours turned up later as marriage partners or fellow witnesses and my ancestor witnessed at least one of his neighbour's will.

At least for the counties I'm interested in there are only a reliable survival of land tax records for the years 1780s to 1832. There's also a searchable collection called UK, Land Tax Redemption, 1798 available on Ancestry. Land tax records may be roughly correlated with the later Tithe Maps (1840s) and census or the Enclosure records (18th/19th century) to pinpoint the (approximate) location of their holdings. If Thomas Fowler was a tenant try searching online catalogues on the names of his landlord(s), which may turn up relevant land deeds.

Yorkshire maintained its own version of a land registry long before a national one was created. But I'm not familiar with searching these - one for each Riding if I recall correctly.

Manor Court Books record the transfer of copyhold land and so may note the arrival of the Fowlers in the parish. Occassionally wills, which won't be found anywhere else will also be enrolled with the court.

But best to double check with the local RO.

Settlement Certificates may give a brief family history of newcomers to the parish.

There's a booklet called pre-1841 census listings - if someone has a copy, hopefully there are entries for one of the parishes you're interested in. There are also other booklets that list militia musters and various tax documents that are known to have survived.

The following may be relevant (and should also be available on Ancestry).

Their children included: John (1742), Mary (1745) and William (1746). Some of these records are indexed under the name FEWLER on FMP. So it's worth browsing the images for Thomas in case he was mistranscribed as well. William applied to be made a Freeman of the City of York in 1774.

Thomas & Jane's marriage record can be browsed to on FMP from the 1769 marriage of Thomas Gibson & Ann Fowler who share a marriage witness in Thomas Slater - possibly indicating Thomas and Ann Fowler are brother and sister. Thomas Fowler signed his name, which could prove very useful to compare with any other potential documents in his name.

I don't believe you have enough information to make a determination based on the Genealogical Proof Standard.

That probably isn't what you wanted to hear. I have a similar problem with one of my ancestors. My best progress so far has been to look for published information in other places such as local newspapers and city directories.

It would be worth trying to trace some of their marriages starting with the more uncommon first names. See if Thomas appears as a witness.

You've made some rookie mistakes here (don't worry, we've ALL done it).

Not the answer you're looking for? Browse other questions tagged england 18th-century baptism-records records yorkshire or ask your own question.

12
Tracing US ancestor back to Germany?
6
Why doesn't my research meet the Genealogical Proof Standard?

11
Strategy for distinguishing between two possible baptisms, and thus people, parents, etc.?
6
Mary and Mally: were they used interchangeably in Yorkshire in the late 18th century?
6
Determining maiden name of Alice who had eight children (1744-1762) with William Sellick christened at Stogumber, Somerset, without marriage record?
4
Explaining migration around 1800 between Somerset, Devon and Dorset?
5
Understanding wording of 1720 baptism at Stogumber, Somerset, England?
7
How should I interpret this sequence of records?
6
Why doesn't my research meet the Genealogical Proof Standard?
3
England - how to know if an original record set from an archive is complete?