I have recordings of my grandfather's cousin interviewing his father about life in Lithuania during the late 1800s and early 1900s. My great great grandfather describes his life as a young child, in particular, a story about his family losing wealth due to a new law.

(The spelling 'Tavlik' is a phonetic transcription of what he says during the interview. The sound is sub-par. It's possible I've spelled or heard wrong. I would post a snippet of the recording but I don't think I can do that on this site.)

I'll make a guess that this might be what was known as Шавли in 1890, just south of the 56th parallel: 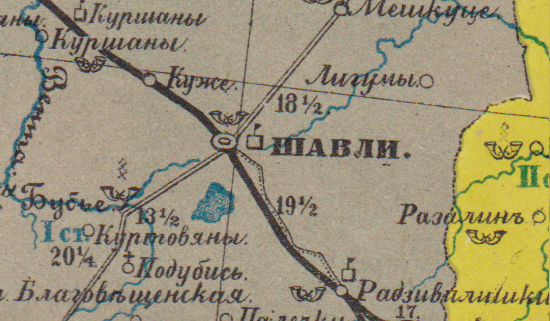 Russian maps of the time put the zero meridian on the Pulkovo Observatory near St Petersburg: the vertical line is labelled "−7".

Шавли would be pronounced Shavli which could sound like "Tavlik" in a poor recording of an elderly man.

Not the answer you're looking for? Browse other questions tagged historical-gazetteer lithuania or ask your own question.