My ancestor was a US citizen (naturalized in 1920) who travelled to [then-]Poland (where he was originally from), and got married to a non-US citizen and had a child with her while he was abroad. He returned to the US with his wife and young child in 1925.

Would he wife and child have required any pre-authorization to be included on the husband's/father's passport, or generally to come to the US as US citizens in 1925? Or would they have just taken the word of my ancestors that they were married or asked to see a marriage document on the spot? The family all appears on the "List of United States Citizens" on the passenger list (see image below).

I am aware that there is a collection on Ancestry.com "U.S., Consular Reports of Marriages, 1910-1949", but there are very few records in this collection, both generally and for Poland. Is there any other place marriage reports from Americans marrying overseas in this period (circa 1920-1923) would be? Here is a webpage from the US National Archives about State Department files, including marriage reports.

I am following this route because many vital records from the area of my ancestors in then-Poland (previously Russian Empire, and presently Ukraine) - specifically the Volhynia area around Lyuboml/Liuboml - did not survive World War II, particularly for the Jewish community (of which my ancestors were part). No vital records can be found locally for these ancestors.

Would the wife and child have needed Polish passports to leave Poland? If so, are these archived anywhere that can be searched? 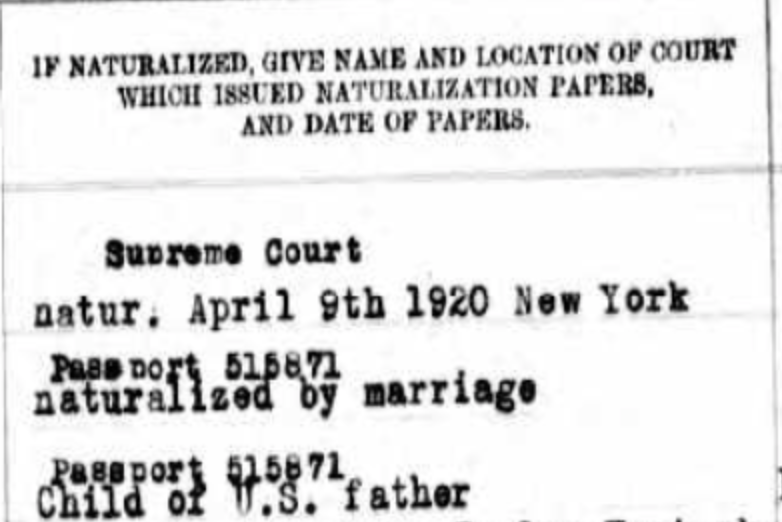 This is a stub of an answer and will be added to as I find more information.

For a fuller discussion of the Cable Act, see this two-part article by Marian L. Smith in NARA's Prologue Magazine:

It was not until 1929 that women who gained citizenship through their husband's naturalization after marriage could obtain a "Certificate of Derivative Citizenship" from the U.S. Immigration and Naturalization Service (INS). And it was not until 1940 that INS could issue certificates to women who gained citizenship by marriage to a man already a citizen. While not in themselves proof of citizenship for legal purposes, proof of marriage to a U.S. citizen occurring prior to September 22, 1922, and proof of the husband's U.S. citizenship, remain as the foundation for legally documenting a foreign-born woman's citizenship.

As I understand the timeline:

The 1925 Passenger list says that his wife is naturalized by marriage and the child is a US Citizen by virtue of being a child of a U.S. father. This suggests that the marriage took place before September 1922, but until we see the record, we can't know for sure. You have a passport number: have you looked for a passport in the U.S. Passport Applications, 1795-1925 at Ancestry?

An index search at USCIS (expensive now, I know) for the wife's name and for the child's name might tell you whether either the wife or the child applied to the agency for a Certificate of Derivative Citizenship later in life. Note that Smith says the wife couldn't have gotten a derivative certificate until 1940, so if your ancestor's wife died before then, there might not be any correspondence.

Looking for the passport noted in the passenger list is cheaper and easier than asking USCIS to search their records and should be your first step.

You could also narrow down a possible marriage date by looking for clues in other United States records. See Clues in Census Records, 1850-1930.

Not the answer you're looking for? Browse other questions tagged marriage-records poland russia manifest naturalization or ask your own question.

4
Quebec City Passenger Lists ... 1865-1900: Devising a scheme to view the first page of a passenger list
8
Was there a special Marriage license for Non-US Citizens in 1925?
8
Finding late 1930's ship departures from the Port of San Francisco?
4
Finding marriage record for Priscilla who married printer Henry Hughes probably about 1810 in Breconshire, Wales?
2
Polish/Russian city Name from 1912 Manifest
5
Looking for marriage record of Albert Augur near Bermondsey (London) around 1870?
1
Seeking 19th century marriage record from Upper Silesia in Poland?
3
What happened to Gustav Adolf Neumann - part II?