How can I determine whether there are BSI (Board of Special Inquiry) minutes or records for an alien on a list of detained aliens?

How can I determine whether there are BSI (Board of Special Inquiry) minutes or records for an alien on a "List of Detained Aliens" or "Record of Aliens Held for Special Inquiry"? Were there always hearings for all individuals on these lists, or were individuals often released from detention without hearings or the production of additional documents?

I am attaching three images as examples of individuals I am seeking BSI records for (if they exist). 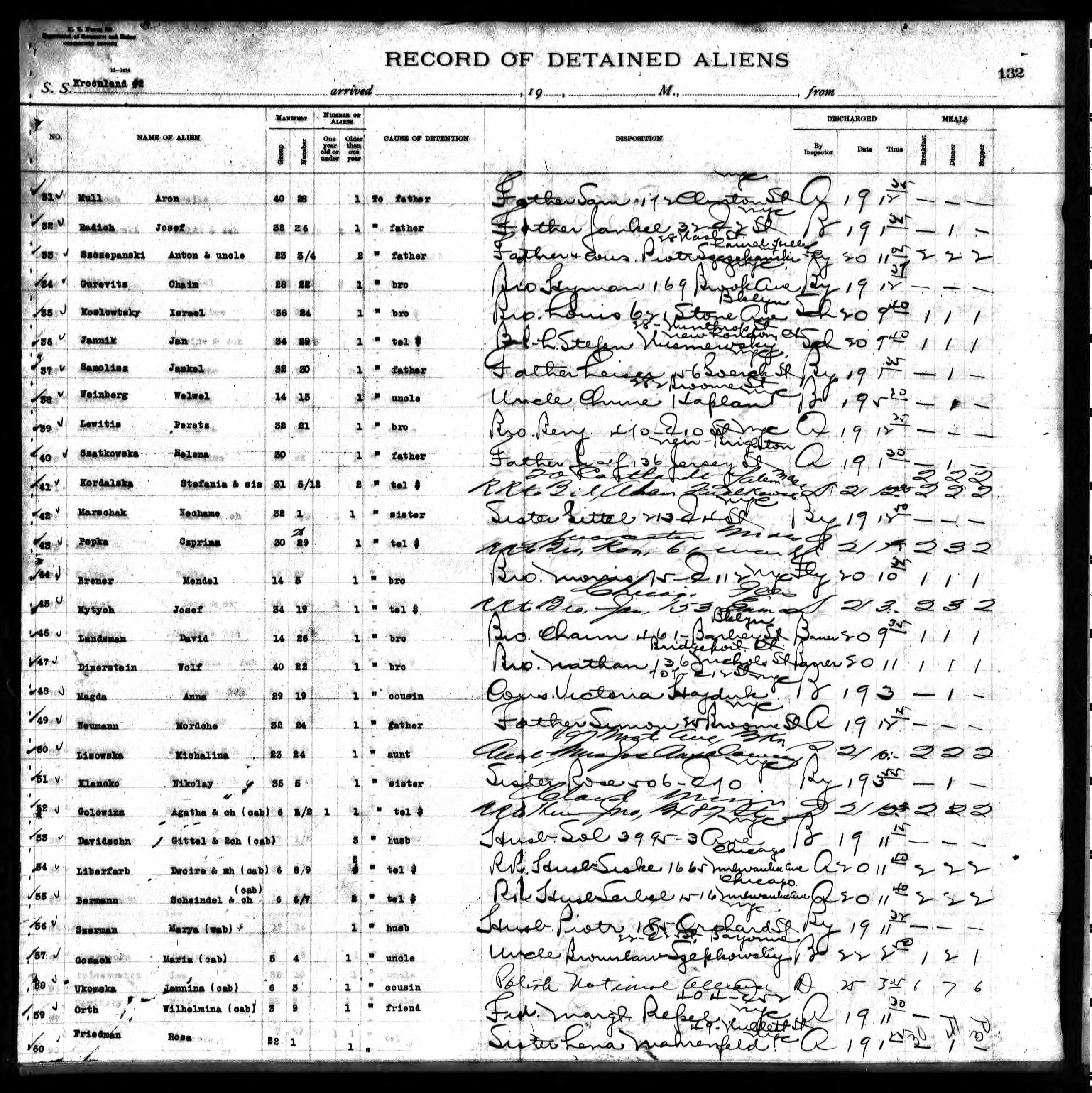 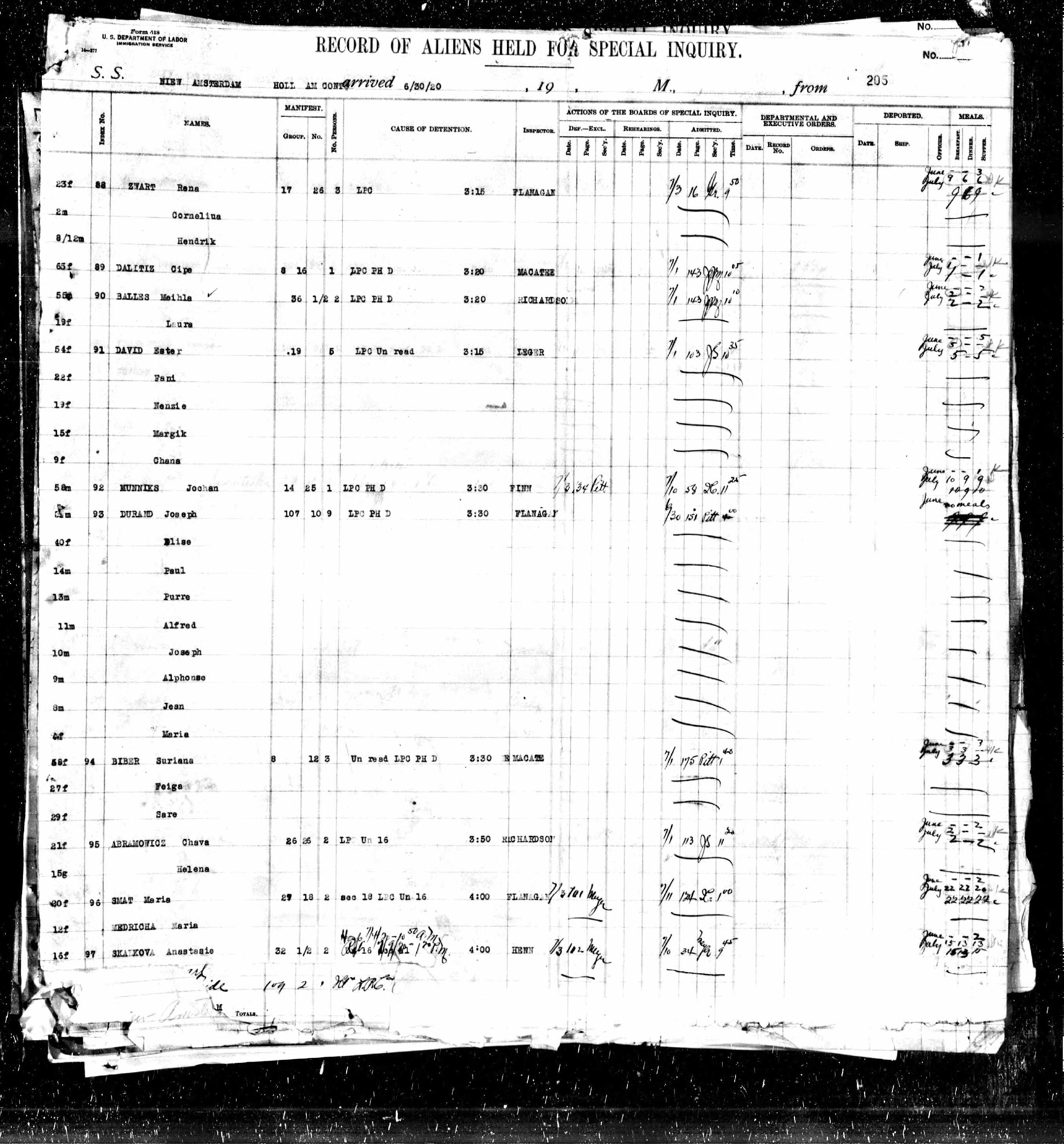 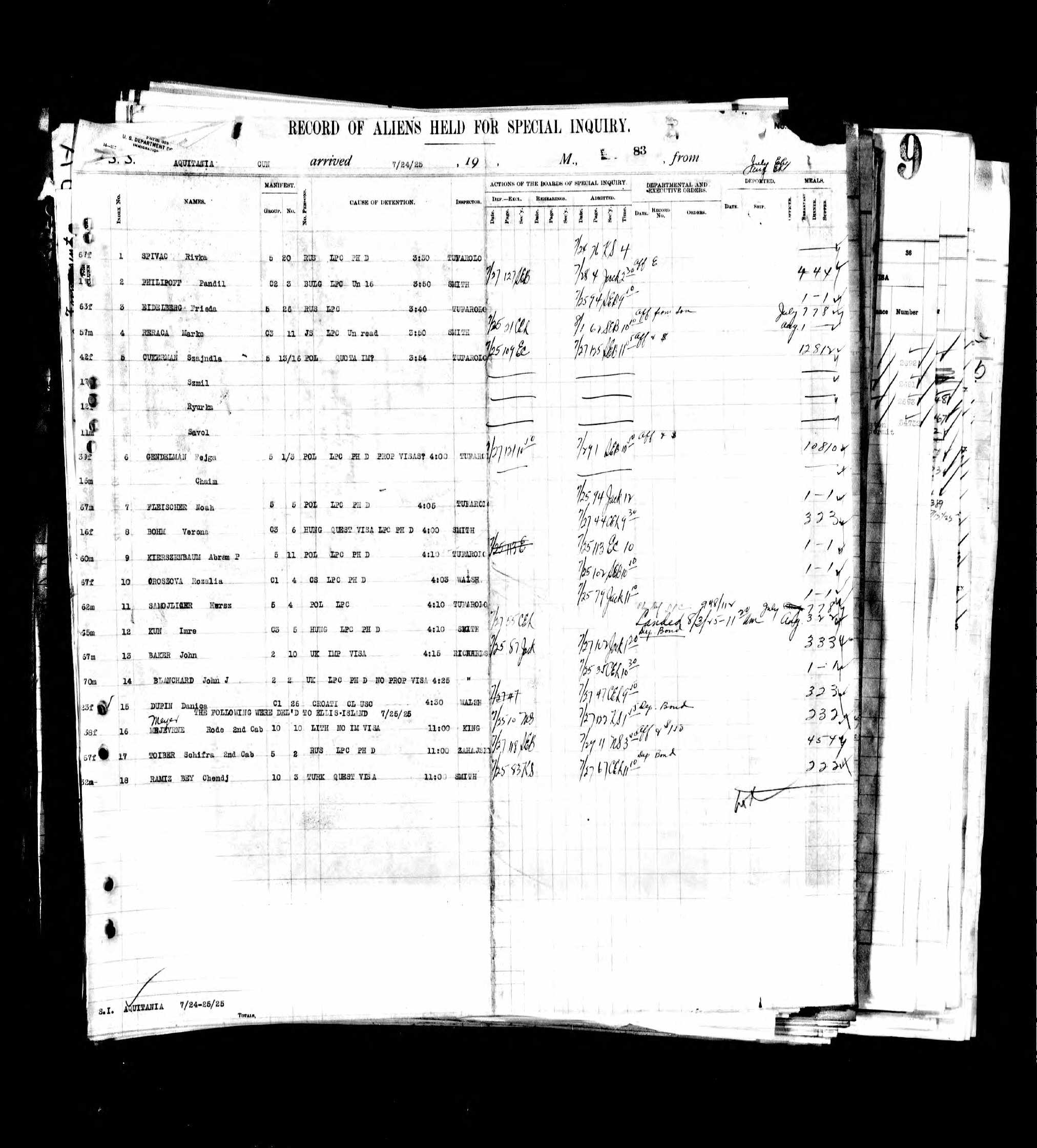 For records prior to April 1, 1944 "Today, exclusion files exist only for cases appealed to INS headquarters in Washington, DC. There is usually no surviving record for non-appealed exclusion hearings, which made up the majority of cases."

That web page goes on to describe the subject index for the case files, searchable online on ancestry.com or via microfilms held by the US National Archives and Records Administration (NARA).

Each of the three examples you have seem to be people who were admitted to the US within a day or so of the ship's arrival. That isn't enough time for their entry to have been denied and then appealed to Washington, so it seems very likely that none of their special inquiry records survive. (The image you included for Jankel Samolisa is the record of detained aliens, not the page listing actions of the board of special inquiry. But it says he was given only one meal, so I presume Jankel was held for less than a day.)

In my own research I came across a family who was held for quite a number of days. I made a request to NARA by email, specifying the names, date of arrival, ship's name, etc. NARA replied to me that the file was available, and an estimated number of pages and the charge per page (I believe it was 80 cents per page). The reply included a link to a web site where I could authorize payment (I paid via credit card). Within a fairly short period of time (maybe two weeks) I got another email saying the scanned records were available for me to download. I got several dozen pages of records, including copies of the typed minutes of the board of special iniquiry, then another board of special inquiry when a relative already in the US came to be questioned, as well as a report from an inspector sent by the government to verify the relative's claims about his economic situation, and copies of bonds signed by other relatives promising to pay the government $500 if one of the immigrants ended up on public assistance.

9
Would there be 1830-1850 US naturalization records for children born Canada to parents born in US when relocating back to US?
11
Is there an online list of Kindertransport records?
8
Was there a special Marriage license for Non-US Citizens in 1925?
6
How can a London prisoner be Reprieved for Transportation… and then executed?
5
Are there any resources for finding your family heritage for foreigners?
3
Are there Naturalization records specific to displaced ethnic Jews?
3
Is there a place I can search specifically by birth date for a list of people born on that date?
5
Are probate records typically only for males?
3
How can I find the images where the data was sourced for the 'Germans to America, 1850-1897' database?