How can I find birth record/Hungarian evidence of ancestor born around 1892/1893?

My ancestor Vilmos Schwarcz (AKA Schwartz, Schwarz) was born around 18 December 1892 in then-Hungary - present-day Slovakia. His US documents all list his birth town as Gesce/Hernadgesce (Geča today).

His family was Jewish. I have found birth records for his siblings available in a database online in JewishGen.org (see attachment). These are records from the Slovak State Archive Kosice - Birth Register. I wrote to the archive to ask to search for a record for Vilmos's birth record in any of the cities mentioned in the attachment for siblings as well as Geča, but the search was negative. I understand his birth was before the civil registration began in 1895. 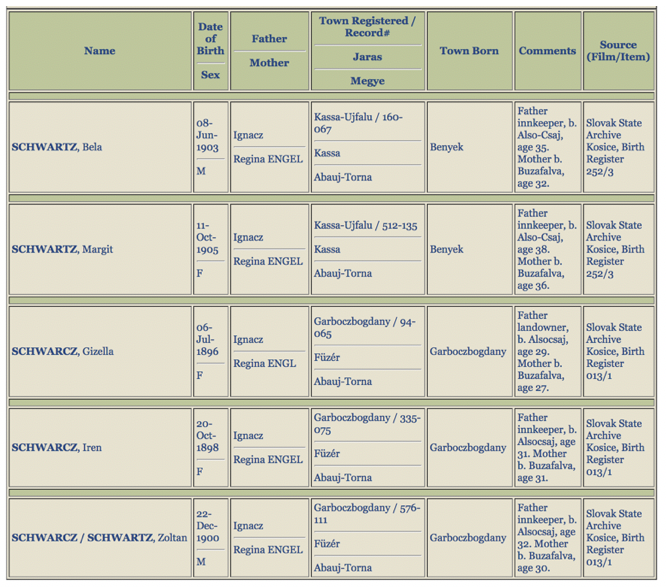 Before the start of civil registration, vital records were the responsibility of churches.

According to Dvorzsák's gazetteer (https://kt.lib.pte.hu/cgi-bin/kt.cgi?konyvtar/kt03110501/0_0_1_pg_14.html), Jewish residents of Gecse in Abaúj-Torna county were recorded in Szina (Abaújszina, now Seňa, Slovakia). Unfortunately, FamilySearch does not appear to have this congregation's registers. Judging by the indexes on JewishGen, the state archive in Košice does have something from Szina, but it looks like Dvorzsák's information about recording locations may have been inaccurate, because none of the Szina birth records have Gecse indexed as the "town born".

Based on the mix of birthplaces entered (including Gecse, though not in 1892 that I could find), I think that the Jewish registers filed under Košice on FamilySearch (https://www.familysearch.org/search/catalog/693073) are actually a centralized archive copy of vital records from Jewish congregations around the county. Like many such copies, they do not appear to be complete.

Censuses are not generally available as a genealogical resource in Hungary, because data collection sheets are and were purposely and statutorily destroyed after tabulation. Some of the enumerations accidentally survived from the 1869 census, and the digitized images are available on FamilySearch (https://www.familysearch.org/search/collection/1986782), but they have not been indexed, and I don't see Gecse, Alsó-Csáj, or Búzafalva among the places covered.

Not the answer you're looking for? Browse other questions tagged birth-records emigration civil-registration hungary austria-hungary or ask your own question.