I am trying to locate my Grandfather's Birth records. He lists "Chruszow, Poland,1901" as his birthplace.

What would Chruszow, Poland, now be known as? What Parish would I search for Chruszow in? He was Roman Catholic, I apoligise if I have mispelled the name. 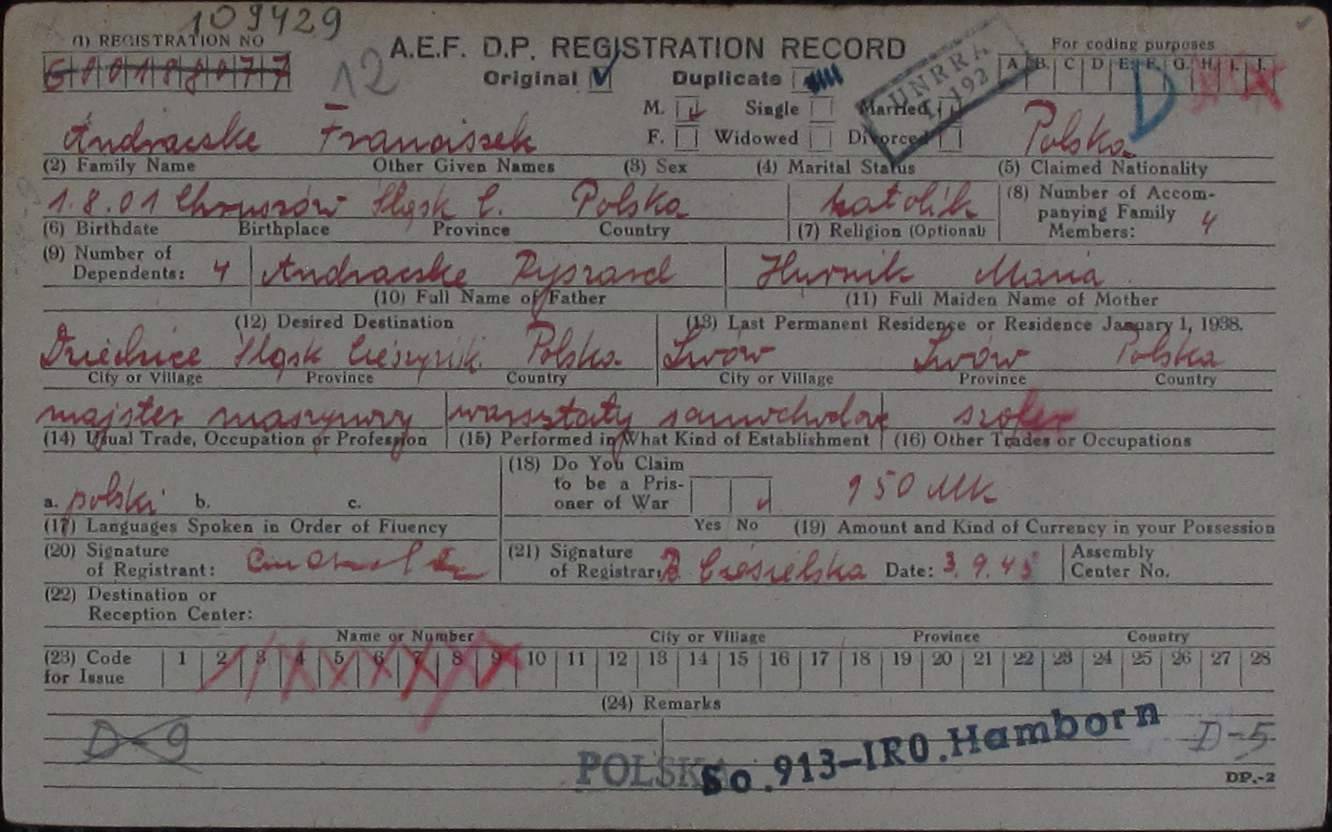 You need to consult a historical gazetteer of Poland that takes into account the boundary changes with other countries over the years.

https://www.familysearch.org/wiki/en/Poland_Gazetteers is a good starting point to identify a suitable gazetteer. Your document is from 1945 , so you're looking for a relatively recent gazetteer.

I haven't checked in any of the gazetters but http://www.maplandia.com/poland/slaskie/bytom/chruszczow/ might be a contender.

It does seem that the province shown in your document for both the birthplace and the desired destination is "Śląsk". That is the polish word for the Silesia region of Poland which existed between 1742 and 1945. It is located in what now is southern Poland bordering with Germany and the Czech Republic.

The town is likely Chorzów, which is not shown on the above map but is near Katowice (Kattowitz on the map) near the eastern border of Silesia. 50°18'N 18°58'E, 161 miles SSW of Warsaw.

The destination city in your document appears to be Dziedzice which was also in Śląsk (Silesia), about 20 miles south of Chorzów. It is now known as Czechowice-Dziedzice following the merger of the two towns in 1951. 49°55'N 19°01'E, 183 miles SSW of Warsaw.

lkesslerlkessler
16.5k22 gold badges2323 silver badges8080 bronze badges
2
Add a comment  |
-1
Want to improve this post? Provide detailed answers to this question, including citations and an explanation of why your answer is correct. Answers without enough detail may be edited or deleted.

check for Commune Naleczow, lubelskie voivodship.. Found a reference to it in a European Arrest Warrant from a few years ago. It may be where you are looking for.

6
Looking for 1901 birth/baptismal certificate in Poland?
4
Where is the Friedrichsbruch near Kokotzko in West Prussia / Poland?
1
Where is town of Pogena, Russia (or Lithuania) where ancestor born in 1885?
3
Finding records in the place of origin of an immigrant to Canada & USA from Poland?
1
Finding 1894 birth record for ancestor born in Poland?
5
Finding Grandfathers birth certificate born in Lwów Poland
4
Finding a town in Russia-Poland from 1910
3
Identifying city of Bacziw in Poland?