Where was Robert Brown at the time of this 1911 Military Census?

Here is a record on Ancestry from a 1911 military census enumeration. 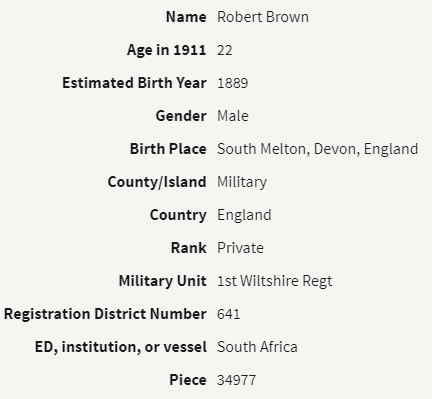 I have been looking through his military papers and I can see references to South Africa. My understanding from the above is that in 1911 he was in South Africa. Yet the Country/Island says Military.

I am trying to confirm (if possible) exactly where Robert Brown was at the time of this census because I don't like having a place called Military.

Take a look at the image and scroll back a few pages, to the start of that enumeration book. You will see it shows the location of the regiment at the time of enumeration:

If, for some reason, you did not have access to the images, you can go to The National Archives catalogue and search for the reference given in your transcription (RG 14/34977). Here you will find a list of the various regiments in that piece, and their locations.

Findmypast haven't omitted the header pages, there is a direct link from the page image. Go to 'Related images' in the bottom right corner and you will see it under 'Address'. As this is an institution, there are only cover and address options, but from a regular household schedule you will also see links to the relevant sections of the Enumerator's Summary Books (RG 78).

BTW you are right about the military returns being created from muster rolls (why make extra work for yourself, after all?) I have seen examples where a conscientious army clerk has listed names from the muster roll, and then crossed out the names of those who were not actually present. And if you look at Shorncliffe Barracks in 1871, you will see several men listed there as single ment, but you will also find the same men in lodgings outside the barracks, with their wives and children!

... is just Ancestry trying to stuff the type of census into a convenient field and using County.

What you need to do is go to the image in Ancestry (which is 47 of 341), switch the filmstrip view on so you can see the surrounding stuff, and scroll the film left. Very swiftly you'll come to the header pages for that little group - the very first page (at image 41) is conveniently in a different colour and there you will see the postal address in South Africa. At least, it goes as far as the name of the town. If you scroll back even further, to image 2, you'll see another of those purple header pages that gives the actual Fort in the town for that unit (which isn't the Wiltshires). Whether the Wiltshires are at the same Fort, I don't know but I'd think it distinctly possible. I'd leave it at the town level if it were me but add in a note that he was probably stationed at that Fort.

FindMyPast have a more helpful index, by the way, but no filmstrip view - and (as is unfortunately typical for FMP) they have omitted the header pages!!

My only caveat to all this is to wonder exactly how accurate the military censuses are with respect to who was where. If the Wiltshires had sent a Company off on patrol - would they be recorded at their base or "somewhere in South Africa"? Having once seen records of a soldier who was present at 2 locations in the UK census because he was on an overnight trip, I suspect that the census is filled out by the base's office from the muster roll and exact deployments ignored. Counter examples welcomed!

Not the answer you're looking for? Browse other questions tagged military-records census-records 1910s south-africa or ask your own question.

13
How would you handle a census record that is almost certainly the target family but which has too many discrepancies?
3
What are the office codes on the 1911 Census?
2
Where was Charlotte Hancock, usually of Lewannick, Cornwall, for the 1851 Census?
3
Where was Matthew Nettell, of Illogan, Cornwall, for the 1861 Census?
4
Where was Mary Ann Harper in the 1881 England census?
2
Where was Joseph Brown Lever for 1841 England Census?
4
Where is the 1911 Census record relating to Milly Bungay/Mason/Weston?
5
What was William H. Clements' military service shown on this military grave registration?