Other "Indian Territory" besides Oklahoma?

I've got a girl in the 1900 Census living with her father and step-mother.

The father, Charles, as far as I can tell, always lived in the Atlanta region (born 1867 in Carrollton, almost due west to Alabama, there in 1870 and 1880, and in Atlanta for the rest of his life).

His wife Louise moved with her parents from Indiana to Atlanta, where she married Charles and had two children in 1897 and 1898.

So now we have 12 year old Effie in the 1900 census, but it says she was born in the Indian Territory.

It's possible that Charles moved to "Oklahoma" and then back during those twenty years, but I'm wondering if there was a region of Georgia still referred to as the Indian Territory. (There's a married woman in the 1910 census who might be her; that woman is recorded as being born in Texas, along with her mother and father.)

TL;DR was there a part of Georgia called the Indian Territory in 1900?

The Wikipedia article has extensive references to the acts and links to other articles on the Cherokee, Choctaw, Chickasaw, Creek and Seminole people.

The problem with Census information:

There are a couple of things to consider.

Note that the instructions specifically list Oklahoma as one of the places where the enumerator is supposed to record the contemporary place name instead of the name the region had when the person was born.

We can guess about who gave the information to the enumerator, but we can be pretty sure that the informant wasn't Effie's birth mother. It could have been the 2nd wife, or it could have even been a neighbor.

Users can search by State and then County for all entries in the database, or by selected features. The screenshots below are for searches in Georgia for "Indian" and 'Populated Place' or 'Post Office' as the features. 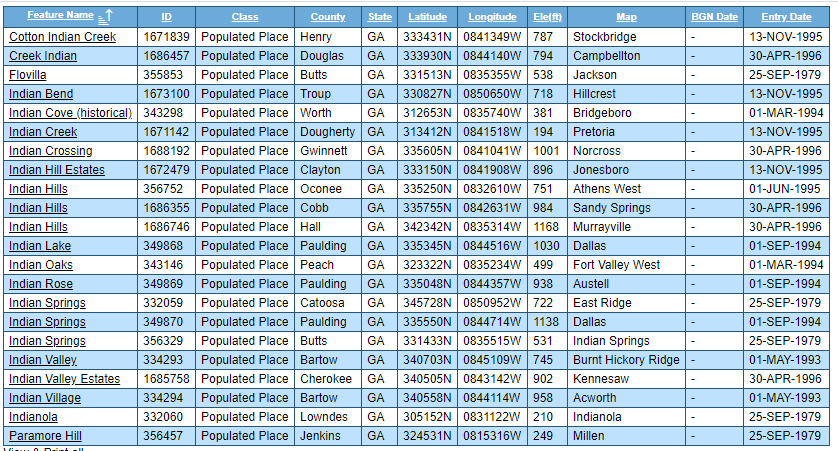 You could try looking for the term in local histories, in gazeteers, in genealogical publications (e.g.by using PERSI, the Periodical Source Index) and other reference works. You might be able to find area diaries or ephemera by searching on ArchiveGrid or contacting the local historical societies or genealogical societies. Have you investigted the Enumerator (i.e. are they from Georgia, and if so, from which part of the state)? Have you looked in historical newspapers around that time for instances of "Indian Territory" referring to Georgia rather than Oklahoma?

Whatever you find, bear in mind that one record doesn't constitute proof about any fact or event. For proof, you need a well-argued proof statement, showing that your research has met the current genealogy standards. For births from the 1880s, there won't be statewide registration for either Georgia or Oklahoma, and you'll need to look for delayed birth records or to build a case from other records.

Not the answer you're looking for? Browse other questions tagged census-records 1900s-decade georgia-usa or ask your own question.

13
How would you handle a census record that is almost certainly the target family but which has too many discrepancies?
7
Washington County, Ohio in the 1810 Census
6
Parsing census record (including in-laws) from New York City?
6
No trace of grandfather in 1891 or 1901 census?
4
How to confirm my research of Charles P. Cantrell?
6
Seeking census records earlier than 1900 for Indiana ancestor named Delmain?
1
Searching for Birth Record or 1900 Census, Marie Paris b 28 Mar 1885 St. Louis, Missouri
7
Can 19th century US Census records be reliably used to identify a family of origin?
5
Is Unregistered Death possible after 1900 in U.S.?