I am slightly confused about a place on a 1901 England Census entry.

What I have transcribed is Milson, Wiltshire, England. But this location with not resolve in Family Tree Maker.

I can see from research and the list of supported places: 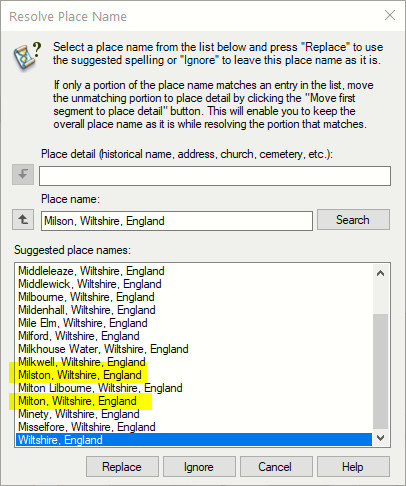 But IMHO it does look like Milson to me so I am confused as to the correct birth place.

It was requested if I knew the names of Emily's parents. All I have at this state is hints: 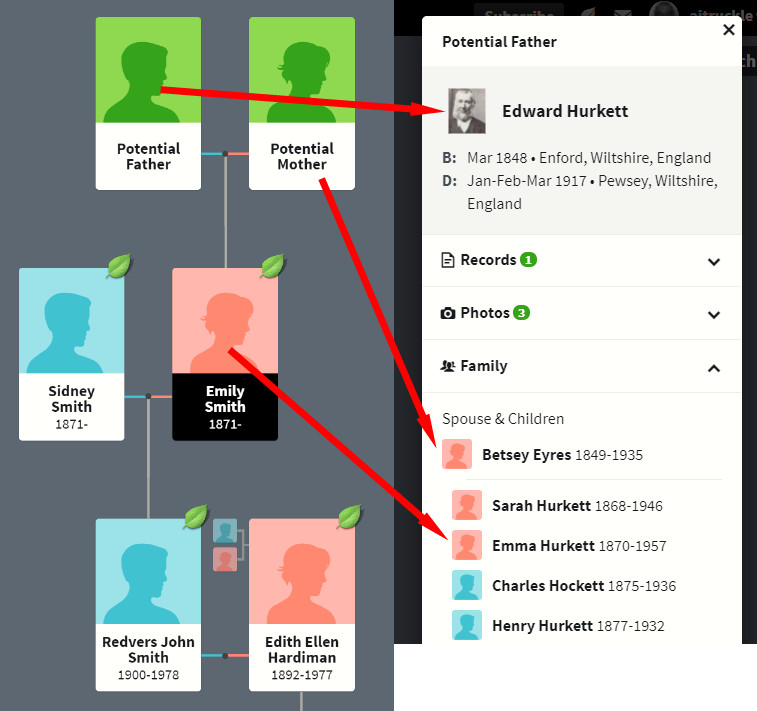 But I do not even know if that is her parents I am afraid.

Before I address the place name issue, I'd like to repeat the wise advice given elsewhere on the site in this answer to the question Tracing US ancestor back to Germany:

At one time or another, I suppose most of us have suffered from premature connectivitis syndrome (PCS)--we don't really know enough yet by which we can well identify a person, yet we want to connect them to a much earlier place in time. I know I suffered. Somewhere I have copies of e-mails sent to cousin Dr. Bill Smith with lists of Preston and Butler names. All of these e-mails could have been titled, "So and so might be one of these, right?"

You're in the same situation here, only you're trying to identify Emily Smith's birthplace, not her parents (or I should say, as well as her parents). You have two birthplace candidates, and it might be one of them, or it might not. How can you identify them?

To solve the immediate problem: "How do I enter the birthplace in [software]?" -- if I haven't made a determination yet about what place was meant, but for whatever reason, I'm certain this is my family of interest, I enter the birthplace with the county only. I don't try to work out the "correct" birthplace from one record alone; I do my best with the transcription, and put my thoughts into research notes, pending further investigation.

Do you have all the later census records for this family? For this particular case, that means looking for this family in 1911. If you find this couple, you'll get useful information, such as the number of years in the current marriage, the number of children they've had and how many are still living, and another piece of information about Emily's birthplace.

After that, I suggest working backwards to find the 1891 Census, and to look for the possible marriage record for the couple.

Note that all the children in this family seem to have been born in the same place. Is it the same place the family is living in? Have you looked up the civil registration district for that area for the period when the childen are born? With six children in the family, you could try looking up their birth registration on FreeBMD or the GRO Online Index (or both), looking for results of the mother's maiden surname. Researchers with access to TheGenealogist.co.uk can use their matching tools (far superior to Ancestry hints, in my experience) to suggest a marriage for the couple, using the children's birth registrations as a guide.

With that information, you'll be on much firmer ground as you try to work backwards to the 1891 Census (which I would expect to record them as a married couple), and possibly earlier census records with Emily and her parents.

Use gazeteers and maps.

When I have questions about places, I turn to maps and gazetteers to learn more about them. I search for them in the GENUKI gazetteer, on the website A Vision of Britain through Time, and in Lewis' A Topographical Dictionary of England on British History Online.

Milston (St. Mary) MILSTON (St. Mary), a parish, in the union and hundred of Amesbury, Everley and Pewsey, and S. divisions of Wilts, 2½ miles (N.) from Amesbury; containing, with the hamlet of Brigmerston, 110 inhabitants. The living is a rectory, valued in the king's books at £12. 15. 2½.; net income, £275; patron and incumbent, the Rev. Peter Hall. Joseph Addison, the distinguished essayist and poet, was born at the parsonage-house, in 1672, his father being rector.

Milton-Lilborne (St. Peter) MILTON-LILBORNE (St. Peter), a parish, in the union of Pewsey, hundred of Kinwardstone, Everley and Pewsey, and S. divisions of Wilts, 1½ mile (E. by N.) from Pewsey; containing, with the tything of Clinch, 709 inhabitants. The living is a discharged vicarage, valued in the king's books at £7. 13. 6.; net income, £111; patrons, the Gale family.

Use GENUKI's town/parish pages to learn more, and to calculate the distance to nearby places.

It may be that none of the other census records you find give a birthplace that starts with 'Mil'. Are these other censuses your Emily, or someone else?

In one of my recent projects, I was tracing a family who lived in Bradford in Yorkshire. The father, who married in 1863 in Halifax, Yorkshire, was reported as being born in:

GENUKI's town/parish page for the ancient parish of Bradford lists Bierley and Wibsey as place names associated with the parish. Shelf is about halfway between Bradford and Halifax. These aren't all "the same place" but they are in the same geographical area, as are some of the place names for the couple's children, and some of the electoral rolls from Yorkshire that turned up in hints for this family. Further research is needed to make sure I don't have multiple families with the same name (although with my subject's name, Uriah Bottomley, there are likely not to be as many as there would be if I were tracking a Smith family). However I hope this example shows the utility of consulting maps and gazetters as you conduct your research.

Not the answer you're looking for? Browse other questions tagged census-records 1900s-decade birthplace wiltshire or ask your own question.

12
Tracing US ancestor back to Germany?
6
What "hidden" clues are there in the GRO Indexes of births and deaths?

5
Birth place points to Quaker Monthly Meeting
4
What does the term "domestic" mean on the 1901 Manitoba census?
6
Looking for 1901 birth/baptismal certificate in Poland?
2
Reading place of birth in France on 1881 Census for Camberwell (London)?
4
Deciphering place name in 1841 Census for Tavistock, Devon, England?
6
No trace of grandfather in 1891 or 1901 census?
4
Looking for the 1901 census record of Annie Elizabeth Ward
0
Birth certificate v Baptism entry
1
Reading place-names in 1906 Denmark Census image?