What is the house number on this 1891 Census record?

Here is a census entry for Mary Ann Brown in 1891.

I notice in the transcription that it says 61 East Street. On the image though it looks like this: 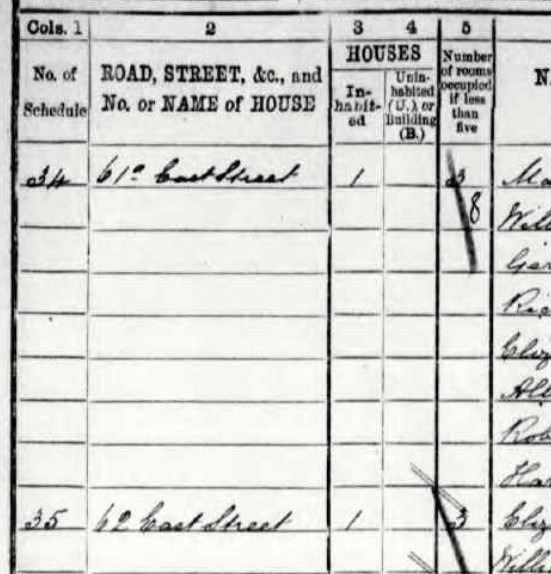 I no longer have access to view the images on Ancestry, but I initially wondered if that was a "?" next to 61. Or, is it a abbreviation for "number"? I tried to navigate at www.freecen.org.uk to the previous property but it said it was unoccupied. And then it would not navigate further back.

The reason I ask is because in 1885 she gave birth to a girl and according to the birth certificate that we have in our possession she was living at 59 East Street. It is very clear on this certificate.

That is why I wondered if it was a "?" on the census entry.

That is why I was trying to see the previous census images ...

The UK and Ireland censuses are available from multiple places: Ancestry, FindMyPast, and MyHeritage to name a few. FamilySearch has transcripts, but it links to FindMyPast for the images.

I can access the image at Ancestry and MyHeritage through my library. In both of these, the image is not very clear. However, on MyHeritage, I was able to zoom large enough so that I think we can confirm that it is a lowercase A with an underscore. In the zoomed image below, you can see that the character has a tail on the right side, and you can barely make out a light spot in the center.

The previous page has people living at 59 and then 3U (3 uninhabited buildings). 61a may be half of a duplex with 61b (which is not listed), or it may be a garage apartment or other dwelling behind 61 proper, which is one of the 3U between 59 and 61a. It would be helpful to locate a city directory for this time period to see how the house numberings go.

This page lists Mary Ann's marital status as M but where's William Sr.? Also, the daughter who is 5 may be the one that was born in 1885, but this one is listed as having been born in Barnstaple, so either that is oddly specifically incorrect (she's the only Barnstaple), or there is a missing child, or this is a different family entirely.

Not the answer you're looking for? Browse other questions tagged england palaeography census-records 1880s devon or ask your own question.

16
Locating an elusive UK birth record (Mary Ann Harper born circa 1865 possibly Dudley, England)?
8
Could 'Annie' be a Pseudonym for Augusta
4
Where was Mary Ann Harper in the 1881 England census?
7
What does 1851 UK Census "Relation to Head of Family" entry that looks like "Depen" mean?
8
Finding an elusive ancestor after the 1901 census (who may have deserted his family)
8
Where is Mary Elizabeth Richardson in the UK 1891 Census?
4
Are Orphanages Included in the U.S. Census?
3
Seeking 1880 Birth Record of Santa Catherine Gazzanovich at Brecon, Wales?
3
Finding records of professional athlete and trainer who married 1911 at Cardiff, Wales?
10
Why would the ages on a 1877 Marriage Certificate be so wrong?