Why does 23andMe say there's "not enough information" on a few of my chromosomes?

I've been looking at the chromosome painter and my matches in 23andMe, and realised I have a few chunks of DNA that are greyed out and read "not enough information", and therefore don't yield any matches on those segments. For demonstration purposes: 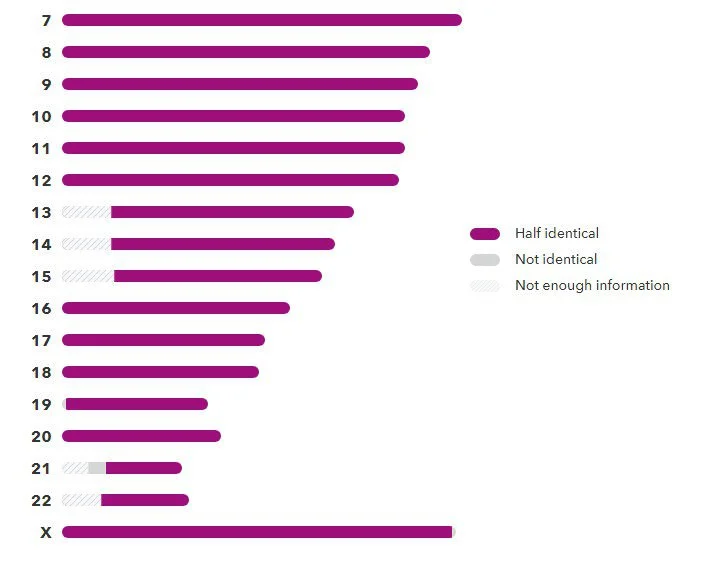 Digging further, all I could find was this little segment on 23andMe's Q&A page.

I can't find anymore information on "acrosomes" that is relevant to genealogy or genetics anywhere online.

Can anyone shed any light on this, and does this mean that potentially matches from other companies that might have a higher centimorgan count because they're actually sequencing and comparing more of the genome?

"Acrosomes" just means that those five chromosomes are acrocentric: the centromere, or where the two single (haploid) chromosomes join together, is very close to one end of the chromosome than the other. The "p" or short arms are really short.

The significance to genealogy isn't that they're acrocentric, but that they're heterochromatic. All sorts of good words here today, huh? Here's a good explanation from Wikipedia: https://en.wikipedia.org/wiki/Heterochromatin. Heterochromatic areas of the chromosomes--which include the centromeres themselves and the telomeres at the very ends of the chromosomes--are tightly packed, generally highly repetitive short sequences of DNA called short tandem repeats, and for the most part are genetically inactive. That last phrase is debatable, but what is valid is that these areas don't undergo crossover--the recombining our chromosomes do during meiosis that allows for our genetic diversity...and for our ability to predict generational relationships from autosomal DNA--in the same way that the rest of the chromosome does.

These heterochromatic short arms of chromosomes 13, 14, 15, 21, and 22 weren't even sequenced as part of the Human Genome Project. And if you visit a tool like the 1000 Genomes Browser and look at, as an example, chromosome 15, you'll see there are no genes or single nucleotide polymorphisms (the SNPs the genealogy microarray tests examine) until you get to about base pair number 20 million, or about 1 million positions above that centromere joining location. So the much abbreviated answer is that there just isn't much there that's relevant to even test.

Not the answer you're looking for? Browse other questions tagged dna 23andme or ask your own question.

7
What DNA test does 23andMe perform?
6
What does it mean for two DNA half-matches to not match each other?
3
Why would Native American Ethnicity not show up in Autosomal DNA results?
5
Why are the lengths GEDmatch.com Chromosome Segment Matching segments not proportional to their cM?
11
Why are 99% of my Ashkenazi DNA matches not in the Middle East or Central Asia?
9
Is Whole Genome Testing in any way useful for Genealogy?
1
Does 23andMe limit matches?