Is there some software that can draw a family diagram with a timeline?

I got an idea of how I wanted to represent my family tree. A regular tree has the disadvantage that time is not taken into account. Generations are shown at the same line, while in fact most of the time there is an overlap between generations. Sometimes an aunt or uncle can be younger than it nephew or niece!

So I searched the internet if it already exists. I found an image of a chart what I had in mind. The diagram is described in this article. And also here. It is called a 'TimeNet'. But I haven't found anywhere that this kind of diagram is already implemented in some software program.

An important advantage of this kind of chart over a normal timeline is that it can show relationships very well. Individuals are represented using timelines that converge and diverge to indicate marriage and divorce as shown in this picture.

Does someone know if there is a genealogy program that can create this kind of diagram?

Check out Timeline Charts from progenygenealogy.com. It reads GEDCOM files and also reads data directly from some software packages. 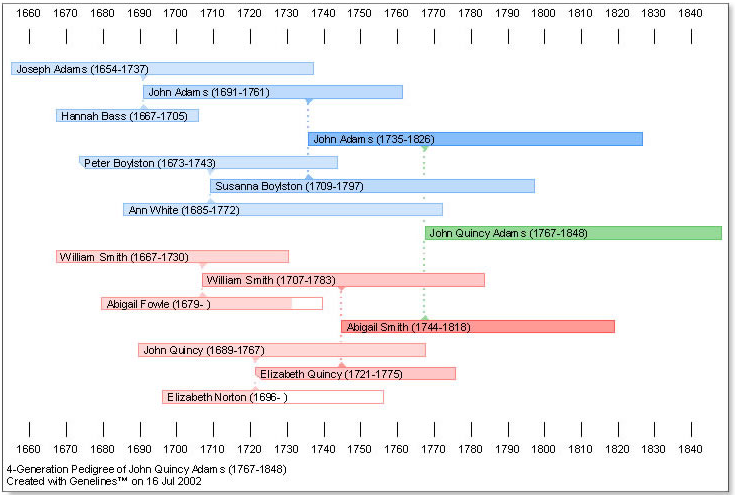 Check out Timeline Software. I've developed this program to display history timelines, including family charts. There are many options to display relationships.

See for instance this Obama History Timeline, including his family members.

While not an exact match familysearch has a new discovery page where it displays a family timeline (example): 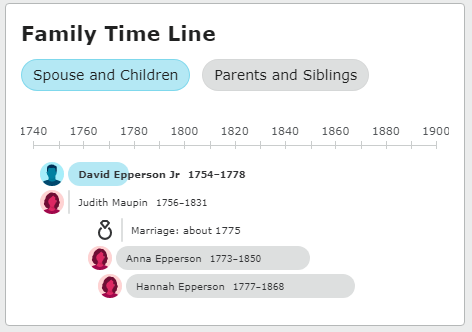 Seeing that you are a programmer, you might be interested in knowing that Gramps, the decades old, maintained open-source genealogy program has a wide support for plugins to support various use cases. TimeNet is listed on their page as something that has been talked about, but it seems no one has implemented. If you are interested enough, maybe you want to enjoy a deep-dive into graphviz programming to generate this kind of visualization. Definitively see this is as interesting myself!

Not the answer you're looking for? Browse other questions tagged software-recommendations chart-type or ask your own question.

2
Is there any genealogy software that will assemble lists of cousins from a gedcom?
3
Seeking Family Tree Software with Photo Integration that tags faces of people?
1
is there a GRAMPS descendant or family report that includes photos
4
Software to record polygamous family with sequence but not birth dates of children?