I want to try and obtain accurate details about my Great Grandparents birth (ie. obtain certificates) on my Grandfathers side. My mother has provided photos of them to me and told me a bit about them.

I understand that he was born about 1883 in Osuna, Seville, Andalucia, Spain.

His parents (my Great Great Grandparents) are:

I understand that she was born about 1890 in the same area and that she might have died about 1945.

My late Grandfather was born in 1913 in La Roda de Andalucia and I have his actual birth certificate. I contacted the Civil Registry Office there and they kindly located it and sent it to me in the post. So I gleaned much of the above from his certificate: 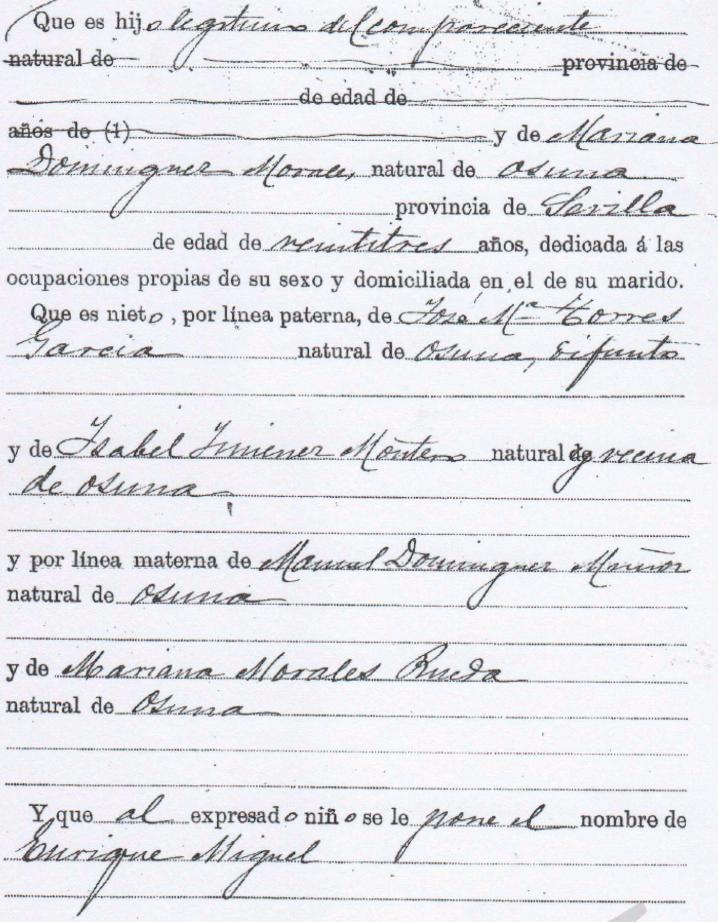 But I can’t find my Great Grandparents certificates. For this question I am limiting the topic to Birth. I wondered that there may be some info in Census Records in Spain that might assist in working things out. I have asked for a search of 1883 and 1890 etc. and have no responses so far.

I looked in FamilySearch and you have quite good resources to find. I would suggest to not start with the census, but with the cementry register, as you know around which date your great grandmother died.

The cementry is this one: https://www.familysearch.org/search/catalog/2821194

Concerning census/registry of inhabitants, I would go as second step.

Unfourtunately, women's suffrage was fully approved in Spain in 1931. That means that any census in Spain before that date will not contain your great grandmother. However, depending on the city, the register of inhabitants (called "padrón" in spanish) might contain women. However, the brothers of your great grandmother will be present. Just wanted to mention that in terms of searching strategy.

When addressing the census, also take into account the voting age (over 18 years), so you should look in census over 1901 for your great granfather. Your great grandmother was 18 around 1908, but you do not have any idea about her brothers... so I would look around 1910-1920.

I looked in FamilySearch and I found that actually several census and reigsters of inhabitants (padrón) here: https://www.familysearch.org/search/catalog/2821195?availability=Family%20History%20Library

I also double checked and they are accessible from internet (you can see the images) but they are not digitalized (so it will be a real search around several hundred of pages...)

I checked the "padrón" and I found that women and men were included but it looks that the minimum age for being included was around 14 years old. That's making your starting time around 1897.

Be aware as well that, for some reason, sometimes the age in the census was not accurate.

Based on that, I would suggest the following:

Another research idea is to contact the cementry of Osuna, they might have a registry of death and might find your parents (with the exact death date you will be able to request a certificate and later on finding the right location)

Hope this helps... if I think in any other strategy I will try to include here.

Not the answer you're looking for? Browse other questions tagged birth-records census-records spain or ask your own question.

2
Finding documentary evidence for father of somebody born 1903 in Kentucky, USA?
4
Finding parents of Maria Cima of Pontevedra, Galicia, Spain?
2
Looking for Census records of Joseph Campbell, born in Chester 1854
5
Deciding between multiple birth names and dates?
5
Ancestor born in Bristol City workhouse?
1
Locating a birth record for Mary Harris circa November 1919
1
Obtaining a plan of the Cemetery in Paterna near Valencia, Spain