Does anyone know where Gilford, Yorkshire is / was?

I found the census entry below and I read the place of birth for William Thacker as Gilford, Yorkshire. I have been unable to find a location for this or anything similar.

Does anyone have any suggestions as to what this location might be?

You may be looking for Guilthwaite. From Wikipedia:

Guilthwaite is a hamlet in the civil parish of Whiston, in the Rotherham district lying to the south of Rotherham, South Yorkshire, England. Whiston stands to the north of the hamlet with Ulley, and Morthen to the east, Treeton to the west and Aughton to the south.

I was not able to find Gilford, Gillford, Guilford, or Guildford in Yorkshire (either the county or the region), with or without "Hill" or "Hall" following it. There is a town named Guildford, but it is in Surrey, in the south of England.

First, I searched MyHeritage for Edward Willson b. Heckington to identify the snippet you provided, which turned out to be the 1881 census of Paper Mills, Leasingham, Leasingham, Lincolnshire, England.

So again we have Elizabeth Willson (not Thacker) with son William of the appropriate age and mysterious birthplace "Gillford Hill" in Yorkshire.

Searching for "Gillford Hill" + Yorkshire found this discussion of what appears to be the same family: https://www.rootschat.com/forum/index.php?topic=824186.0 In that discussion thread, someone calls out "William Wilson b. 1873 Gillford Hill, Yorks" and asks:

That FamilySearch record is the baptism on July 9, 1873, in the parish of Whiston (Yorkshire), of William, son of William and Elizabeth Wilson, abode Guilthwaite.

The curious thing is that Elizabeth Willson was listed as a widow in 1871, but William was baptized as the son of William Wilson. The baptized child may be a different William, or the paternity may be a polite fiction, or the "1widow" designation on the census record may be incorrect.

The birth index for Apr-May-June 1873 lists a William Wilson b. Rotherham; you would have to access the GRO to discover whether this matches the William Wilson who was baptized in July 1873 in Whiston in the Rotherham district of Yorkshire. 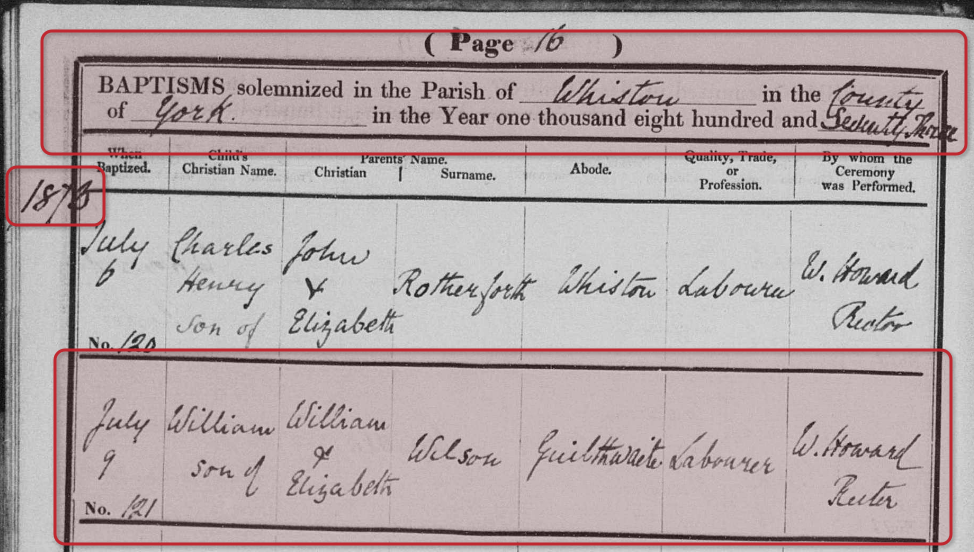 As an aside, "Winker Bank," birthplace of Margrat Thacker in the 1881 census, is possibly Wincobank.

Another possibility, if it's not Guilthwaite, is Bradford, a city in North Yorkshire. The FREEBMD index lists quite a few William Wilsons who were born in Bradford in the appropriate timeframe.

(I started to leave a comment on your question, but my thoughts grew too long and answerlike for a comment.)

10
How likely is it that the England & Wales Census would be wrong about an age by ten years?
4
Can anyone decipher the name of this Royal Navy ship in Beruit in 1861?
11
Strategy for distinguishing between two possible baptisms, and thus people, parents, etc.?
7
Finding the Fatherless Feathers
6
Deciphering three words from mid 19th Century Cornwall Marriage Certificate?
4
Was William Chichester recorded as Judge in 1841 Census at Dymock, Gloucestershire, England?
3
What could the numbers after an affidavit of a burial mean?
8
Where did my 2nd great-uncle William Morris go after 1914?
1
Deciding between two baptism records from ca 1744 for Thomas Fowler of Thorganby (Yorkshire, England)