I can use an online translator to understand the first half: Bertha M, wife of John Shrader, died May 17, 1885. Age 34 years, 6 months, 28 days. This matches my other records for this person, maiden name Beckhardt.

I am having trouble with the bottom part. I am guessing that the bottom part refers to a baby, who died at 4 days. The mother, Bertha, died 3 days later.

There are a few words that I can't read well enough to enter into an online translator, but a German speaker might have better luck. Can someone confirm my interpretation? 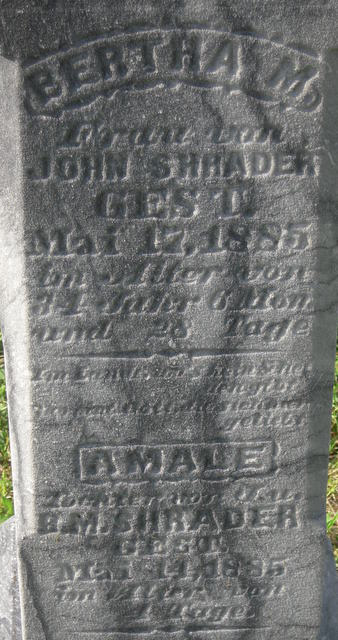 Sorry for the poor picture, not mine. Permission given to re-post image by creator.

Here's what I was able to read so far (original, and translation):

As far as I can tell, your interpretation is right: a daughter named "Amale" (which is not a common German name, maybe it's a misspelling of "Amalie", or maybe not) died a few days before her mother.

I'm having difficulties reading the part between the two blocks associated with the persons, which is probably some saying/poem/bible quotation.

After guessing a few words of the — is proverb the right word for it? — I was able to find it via google on two other entries in findagrave.com, this one and this one.

The complete inscription is very close to

The inscription is very fitting the death of a mother and her child.

A few things caught my attention:

This fits with the information on the linked website that the grave is in Otoe, Nebraska. According to the wikipedia article the town, founded in 1880, was originally named Berlin. "Many of the early inhabitants were German Lutherans". This also fits with the surname Schrader which is most frequent in the Lutheran northern parts of Germany. Bertha and her child died shortly after the town was founded; some people were speaking German there, with an English influence.

Not the answer you're looking for? Browse other questions tagged palaeography german-language grave-marker nebraska or ask your own question.