Which of these German birth records is correct?

I believe that this is the correct marriage record for 12 & 13. A family story says that 6 & 7 in my pedigree chart were first cousins. 13 & 14 are brother and sister. I found 2 possible birth records, which one is most likely for person 12? Or, maybe neither, see next paragraph.

There is another clue that I can't make sense of: The 1900 U.S. census entry for Dietrich (#6) indicates that his father was born in France. The 1910 census U.S. census entry for Fannie (#3) indicates that her father (Dietrich) was born in Germany but his "mother tongue" was French. If his parents spoke French at home, then he could have learned French first. Some other census records indicate that Dietrich's father was born in Germany.

This French connection seems unlikely to me. France is far away from Mecklenburg. Reimer is a German surname. Are there any other logical explanations? Any clues in the sponsors that I am missing? If France was only mentioned in one U.S. record, it could just be a mistake, but it is mentioned in two records. 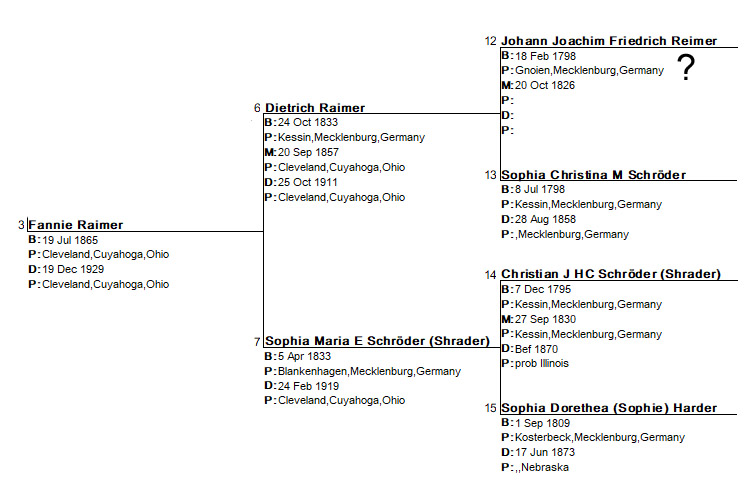 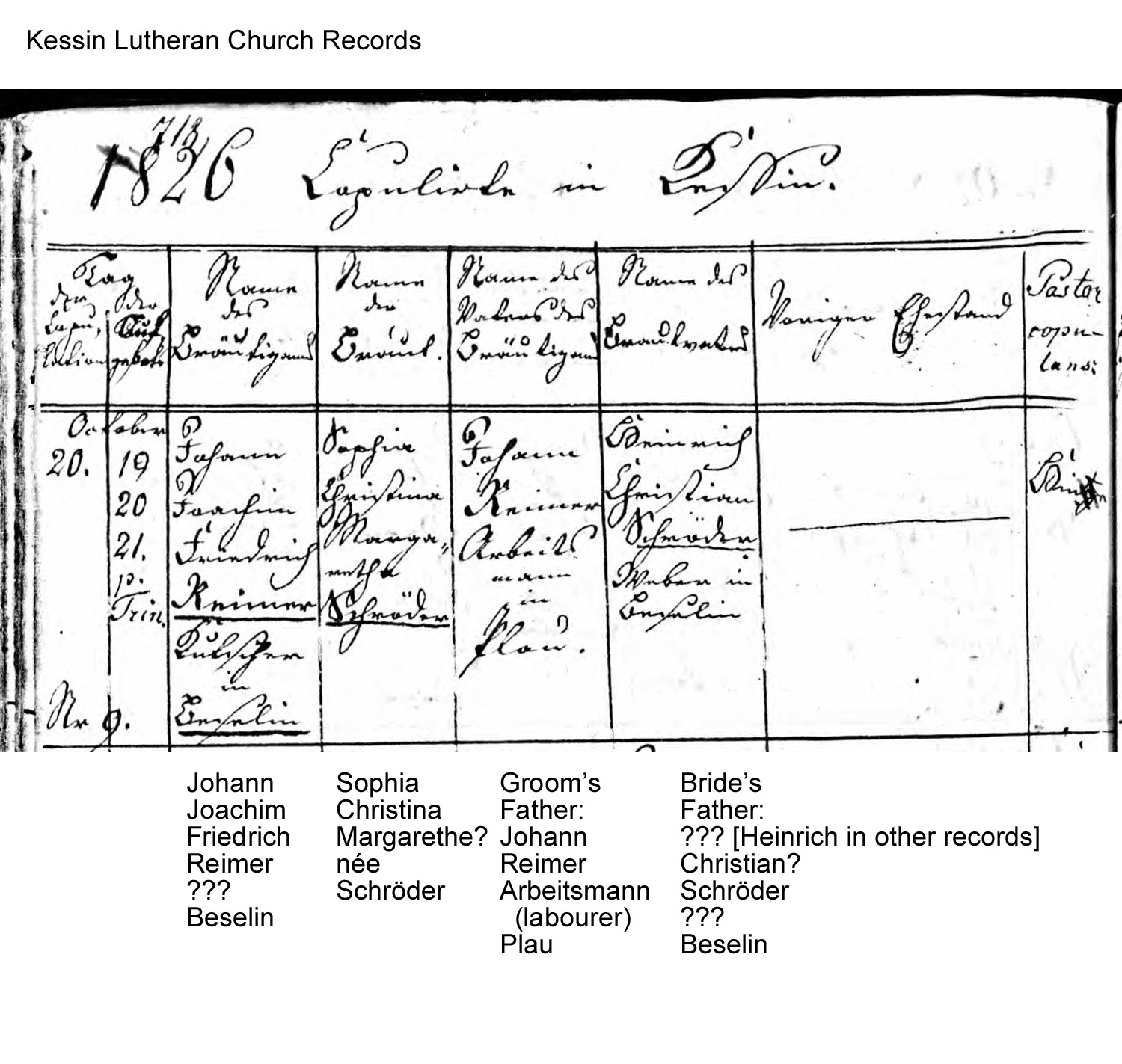 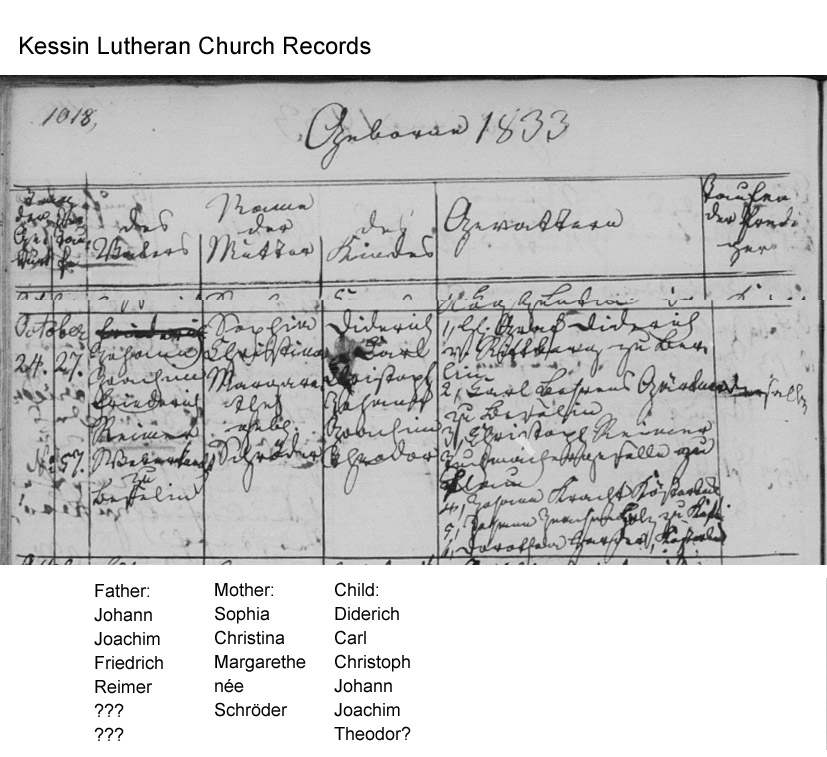 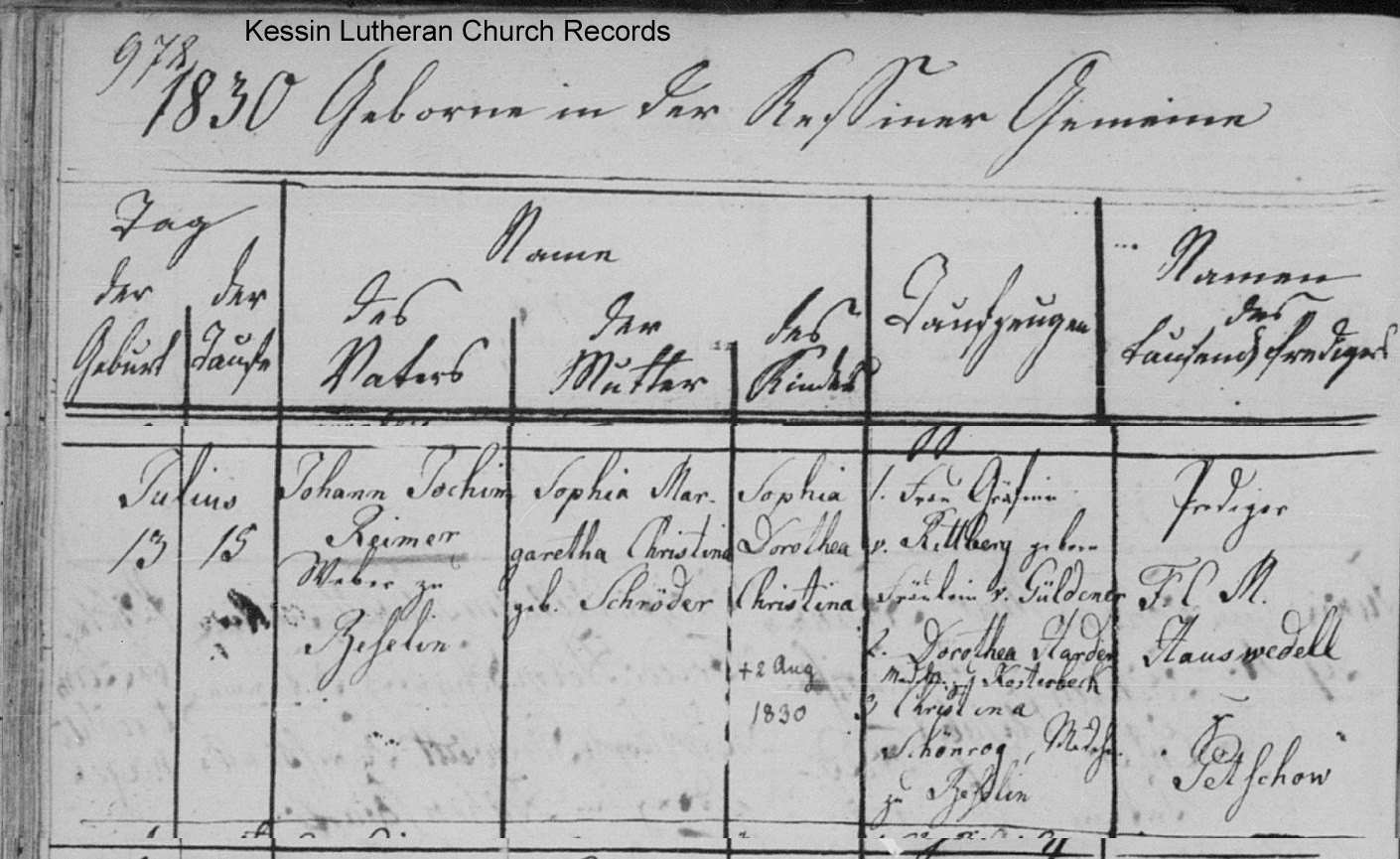 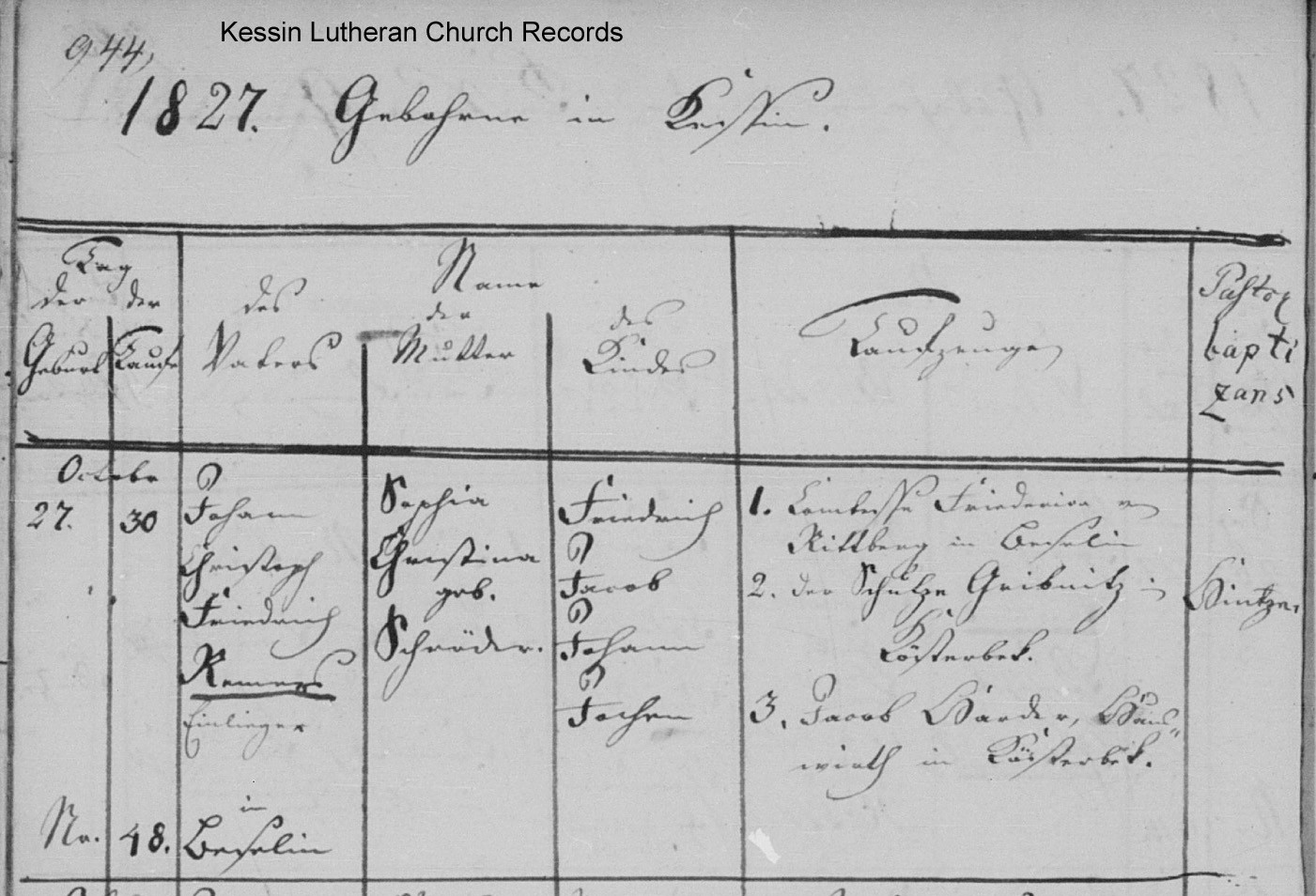 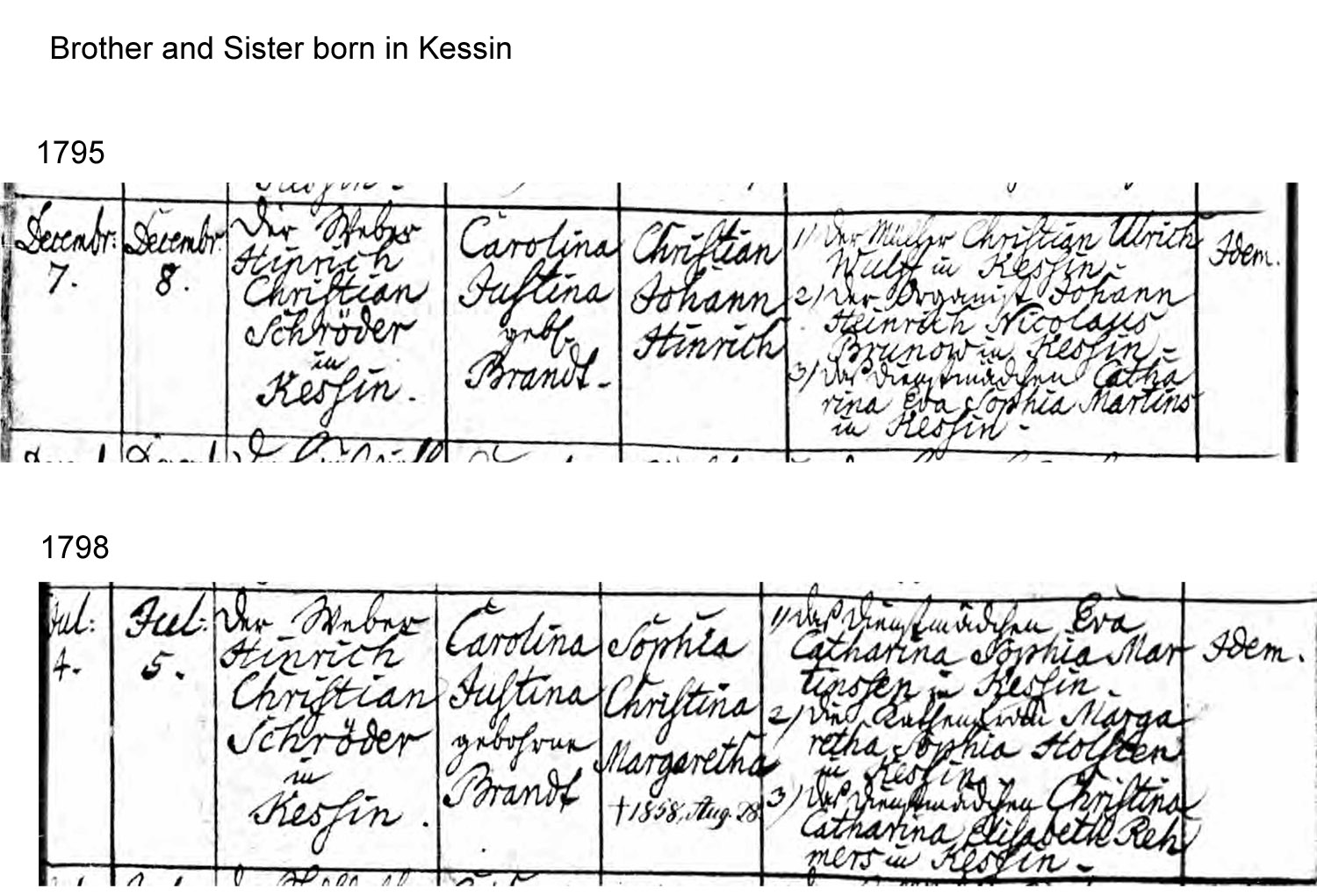 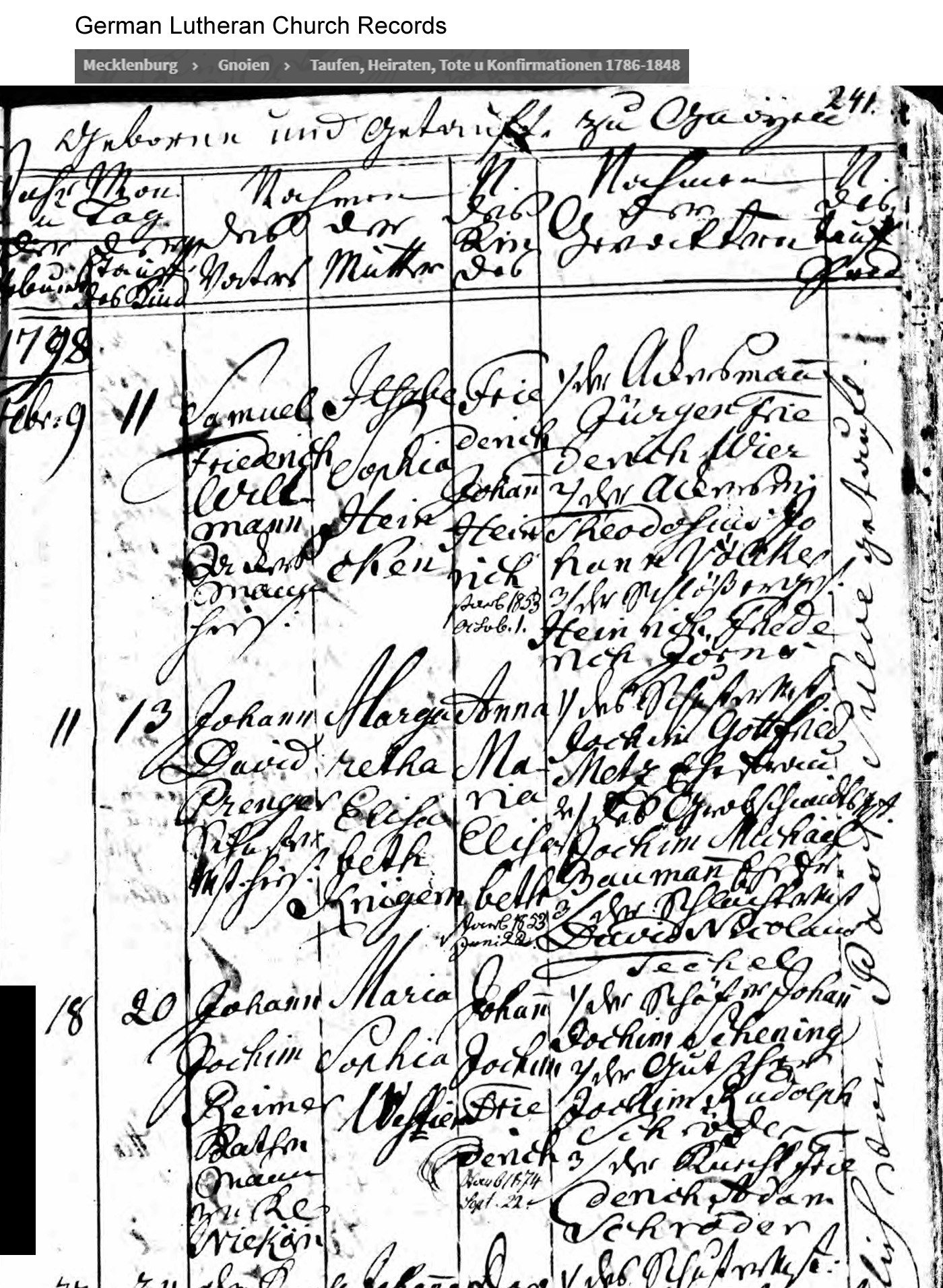 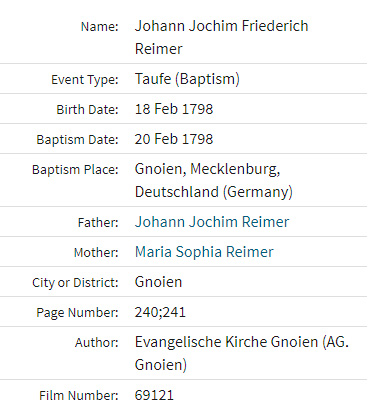 Edit: Death record for candidate #1. If he was born and died in Gnoien he is unlikely to have had children in Kessin. 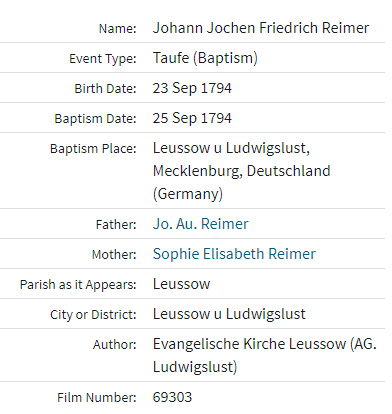 I think you will need more info to decide this.

Excerpt of the birth records:

In your second one the father is called Chr. Jo. Au. Reimer zu Leussow and the mother's name is Sophia Elisabeth Reimer geb. Dubrou [unsure]. The child is called Johann Jochen Friedrich Reimer.

To get more info you could try to

More on death dates: You know the death date of Sophia Christina Margaretha Schröder to be 28/Aug/1858. So she was aged 60. In her death record you could maybe find information if she was already widowed or still married. So you could maybe find out if her husband died before her or afterwards. In your two birth records you have the death dates for both candidates (as also mentioned in the comments). The first one died 22/Sep/1874 and the second one died 22/Jul/1864. Try to locate the death records and see what information you could gain from them. Often the age or even the birth date is mentioned at those records.

The death record seems to say that the person has lived in Gnoien (Arbeitsmann hier) so it is a bit unlikely to have children in Kessin but not impossible. Second thing is that the record says that he was married but it is not saying that he is widowed. After death of his wife he could have re-married or the record could be inaccurate.

Not the answer you're looking for? Browse other questions tagged germany birth-records or ask your own question.