I interpret the reference, "L. C." to mean Lower Canada, but I want to better identify the place, "Broome" in both geographic and jurisdictional terms in order to locate related historical articles, archives/libraries, historical societies, and maps, etc. Such materials might confirm that Lemuel was born there, or at least that his family had lived there and for about how long.

The description in Wikipedia for "Brome County," is interesting because

Help identifying "Broome, L.C." from both a geographic and jurisdictional perspective is much appreciated.

Update 2012-10-29 (Oct 29): Last night I located what is surely the entry for Michael and Mary (Merrill) Preston's family in the 1825 census of Lower Canada. The entry was recorded at Richelieu County, "Township of Broome."4 The town name was had been otherwise reported in the FamilySearch index as Shefford (that town census actually appears on the facing page).

I could browse to the record using these FamilySearch "waypoints":

Perhaps of note, the top of each page includes a reference to when a location was settled; these dates seem to refer to when the township (not country) was settled. The census reports Broome was settled in 1801.

I don't know yet whether Richelieu was part of Quebec in 1825 or not. Below is a partial clip of that census page (digital effects and emphasis added). The citation in the graphic below is mostly based on FamilySearch's recommendation, but I note that their citation refers to a mix of modern/ancient spellings, names and/or jurisdictions." 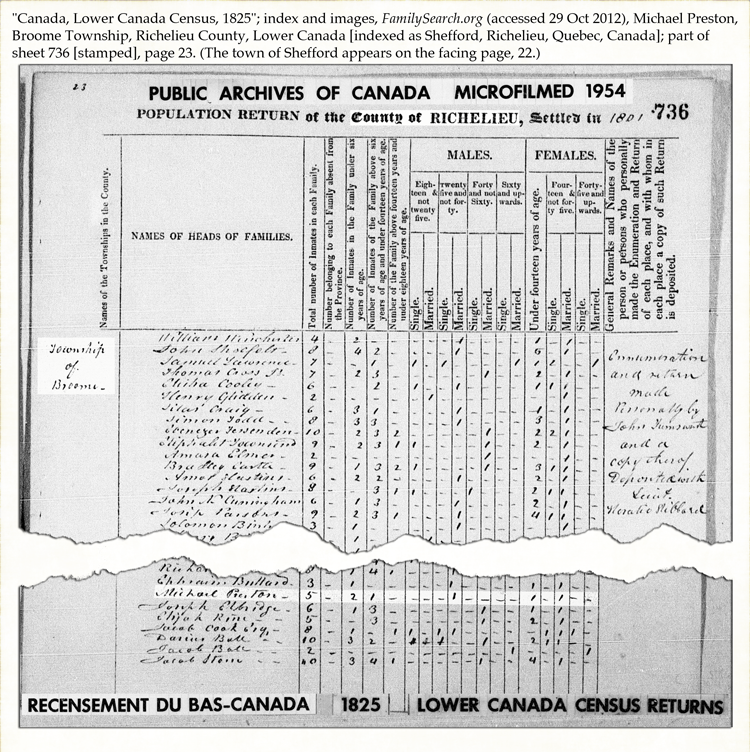 Brome Township is a township that includes Brome Lake and the village of Brome. It is located around 45.2°N 72.567°W. Here is an 1881 map of the township. The township dates back to at least 1797 when its boundaries were documented, as noted on p.68 of Ernest Manly Taylor's History of Brome County, Quebec (Google Books version here). Page 131 of the same work tells us that before Brome County was formed in 1855, Brome Township was part of Shefford County.

Not the answer you're looking for? Browse other questions tagged 19th-century birthplace canada historical-gazetteer or ask your own question.

8
Migration route from New Hampshire to Ohio ca1810-1816?
9
Would there be 1830-1850 US naturalization records for children born Canada to parents born in US when relocating back to US?
14
Locating New England telegraph man (Lemuel Keyser Preston) ca1850?
8
What were the rules about Massachusetts town marriage intentions ca 1811?
8
Old German script. What is the wife's name in this 1837 baptismal ledger from Stark County, Ohio?
7
Finding residence information for Toronto in the 1840s?
6
Reading a Canadian 'Oceans Arrival' form completed in 1924