What day of the German church year would be "Festo Pascha II"?

I'm trying to figure out the proclamation dates for a marriage that took place on April 19 of 1836. The dates are given using the church dates, which seems to have been normal practice for around 50 years in this particular church. However, most of them use German names, whereas in this case, I think it's using Latin names for the dates? Generally, I find https://kirchenkalender.com/ to be quite helpful, but in this case, I'm drawing a blank. 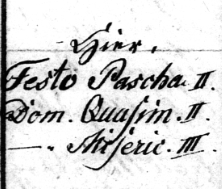 There's almost nothing on Google for "Festo Pacha". Based off https://en.wikipedia.org/wiki/Easter, I'm guessing that Festo Pacha might be Easter Sunday, placing this somewhere around:

However, I have very little expertise with the litergical calender. Would anyone have a better idea which three Sundays this indicated? In case it makes a difference, this was from a German Protestant church, not a Catholic church.

This is indeed (church) latin. The days are, referring to your list:

As for the numerals, I'm not sure. My guess is that this is the service the proclamation was made in (with several services on each day).

Not the answer you're looking for? Browse other questions tagged germany church-records latin protestant-church or ask your own question.

3
Tracing German ancestors in periods that are before church records?
2
Interpreting dates in German church registers from 18th century?
3
Establishing a link between birth and marriage records in an 18th German church register
4
What is being recorded in this Latin church vital record?
3
Would the custom of Charon's obol still be practised in 1722 in Carinthia, Austria?
4
Jewish records in Germany, late 1700 to early 1800
1
Interpreting communion/confirmation records from Sontra in 1606