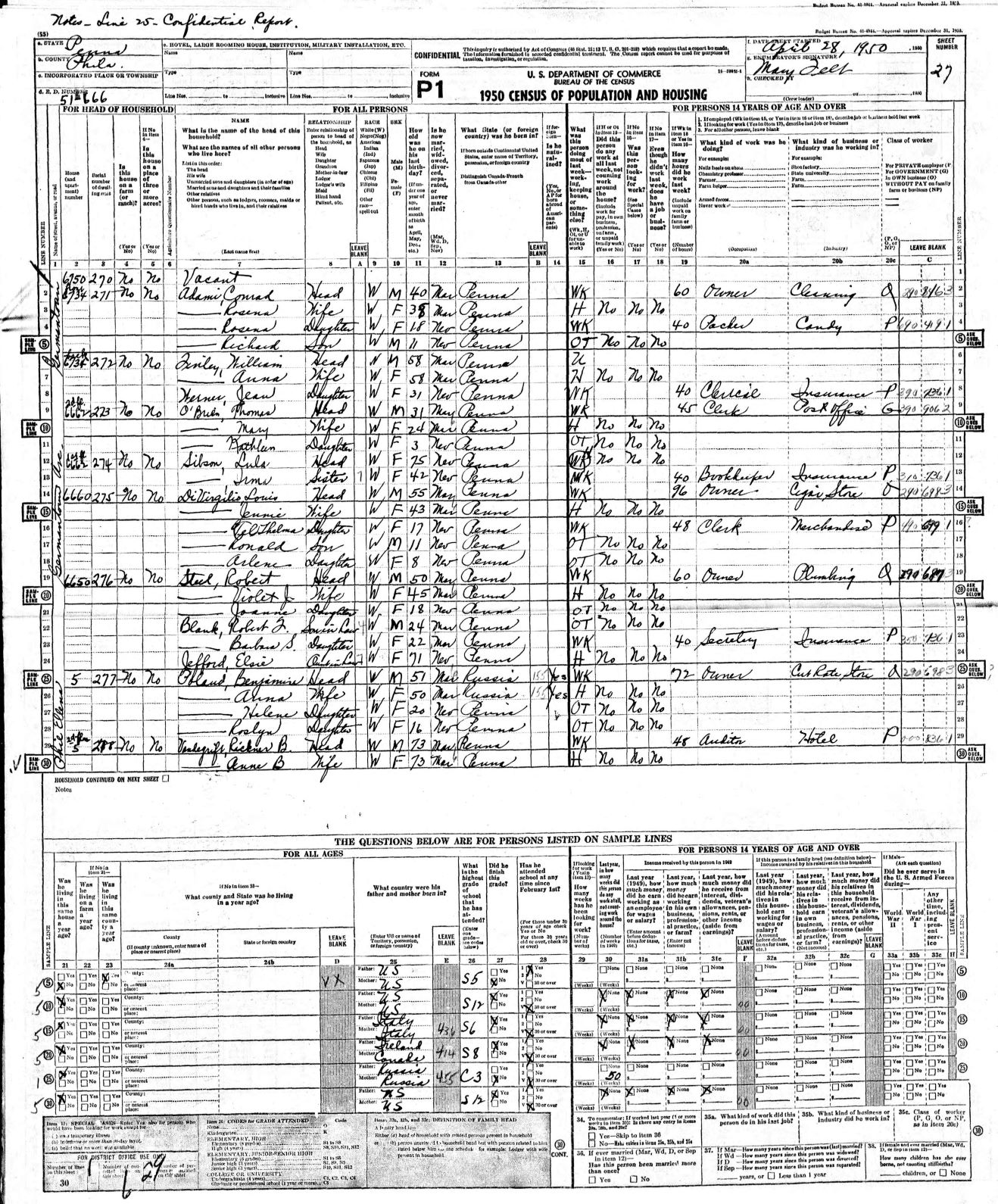 What does this refer to? Does it mean that some of the information requested was not provided because the person thought is was confidential? Or is there some additional report? Or something else?

For the 1950 Census, certain lines on each sheet were designated as sample lines, and the individuals on those lines were asked extra questions. The person on the last sample line on each sheet was asked even more questions (part of the 'super-sample').

Some people did not want to give the answers to the financial questions to the census enumerator. The Census Bureau anticipated this, and gave out a form which the person could send directly back to the Census Bureau. The enumerator's note at the top of the sheet was intended to alert the office so that the information from the Confidential Form could be copied onto the P-1 form.

See 1950 Census: Form P1, Population and Housing Schedule Questions 29 to 33 for All Persons on “Sample” Lines Who Were 14 Years of Age and Over by Claire Kluskens on the US National Archives' site History Hub for an overview of the entire process.

If the respondent still objected, the enumerator was to hand the person a “Form P6, Confidential Report on Income, 1949,” that the respondent could fill out, seal, and mail directly to the Census Bureau in Washington, DC. No signature or postage were required.

The link to the entire series on History Hub is: 1950 Census Blog Series.

The presentation from May 18 at 1 p.m. ET History of Census Records and the National Archives, by Dr. Sharon Tosi Lacey, discusses how sampling began with the 1940 Census, was increased for the 1950 Census.

Not the answer you're looking for? Browse other questions tagged census-records 1950s or ask your own question.

5
What does column 20 of the 1900 US census mean?
13
Can anyone decipher the comment above Louis' name on this 1940 census record?
13
How would you handle a census record that is almost certainly the target family but which has too many discrepancies?
3
What German provinces were recorded in the 1920 Census?
7
What does 1851 UK Census "Relation to Head of Family" entry that looks like "Depen" mean?
2
What was occupation of Skipper in 1855 New York State Census?
7
What is "Canada E" in the 1860 US Federal Census?
3
What is Ellen M Berry's relationship in this Census Record?
8
What happened to the 1896 London census records?
2
Source record URL, linking to a line in a 1950 Census Population Schedule P1?