This question relates to the 1921 Census entry as discussed for William Henry Baker here:

In the transcript for his entry it says that he was at the following location:

When I went to add his Census fact into my tree I saw several Curragh listed: 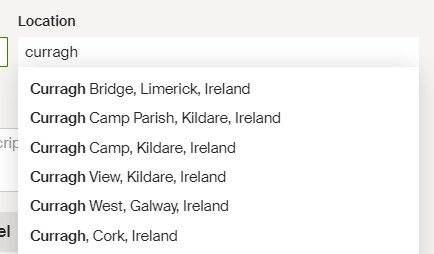 I went with the most obvious (Curragh Camp, Kildare, Ireland).

I based this decision on an article I found on the internet (Curragh Camp) which does state:

The Curragh Camp is an army base and military college in The Curragh, County Kildare, Ireland. It is the main training centre for the Irish Defence Forces and is home to 2,000 military personnel.

But it does not mention this French Furze Camp from what I can tell. Why I try to search for that the first hit is about a racing horse. 😊

So, my question is two fold:

The Curragh where the army were based is the one in Co. Kildare. It was the most important military base in Ireland in the 1800s and remains a military base to this day, now used by the Irish Defence Forces. So yes you have the correct Curragh.

The Journal of the Galway Archaeological and Historical Society Vol 53 (2001) reviewed “A Most Delightful Station. The British Army on the Curragh of Kildare, Ireland, 1855-1922 “ by Con Costello.

The review is on pp 195/6 of the journal, which can be found on the JSTOR subscription site. It mentions the French Furze. Furze is another word for gorse or whin and the Curragh is covered in gorse. The review says that the French Furze was an area to the south of the main camp where the local prostitutes lived. They were nicknamed wrens (the wren being a bird commonly found in gorse bushes).

“The Curragh wrens squatted in primitive makeshift shelters in the furze bushes, mostly in French Furze to the south of the camp.”

There’s no mention of a military encampment being there, indeed the description used implies that the French Furze was an area south of the camp proper. But presumably, based on the information in the census, at some point the Royal Sussex Regiment were camped there. Possibly a temporary overflow arrangement?

Not the answer you're looking for? Browse other questions tagged census-records ireland 1920s army or ask your own question.

2
Does the 1921 English "Army" Census records include the "Soldier Number"?

2
Where is the transcription effort for various census and other large record sets documented?
10
Transients and New Arrivals in the U.S. 1940 census
5
Finding non-resident schedules and absent household schedules for the US Federal Census?
7
Were British Army families stationed overseas enumerated in any Census returns?
6
Interpreting tours of duty on British Army service records?
8
What is the origin or meaning of the photographed ring and pin?
5
What is the date and rank of this photo of a British soldier?
1
What is the connection between Campbell and Ayr?
2
Does the 1921 English "Army" Census records include the "Soldier Number"?