According to his earlier 1852 marriage record (Providence, Rhode Island)2 Lemuel K. Preston (said age 24) then resided Boston, Mass., supposedly a "superintendant of telegraph." Within seven months of the marriage, he was in Texas, working to raise funds and engineer telegraph lines under Galveston Bay.

His name is given, spelled and/or indexed in different ways3, but that hasn't prevented me from locating information about him later. Sigh. Despite a host of attempts, I have NOT been unable to locate this Lemuel Preston just prior to or about the time of his 1852 marriage.

Biographical information about Lemuel K. Preston is included below. How can I fix this problem? 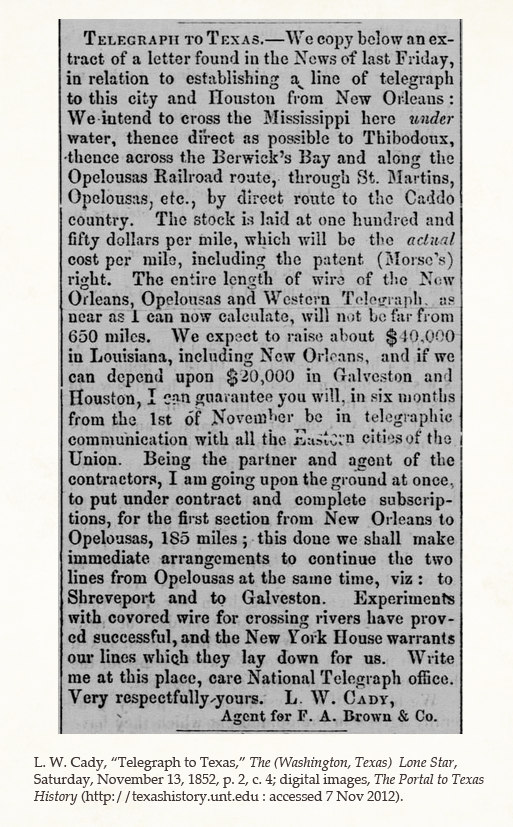 In 1852, Lemuel married Sarah J. "Josephine" (Burton) Estabrook (ca1832-1864). She is identified in the marriage record as Josephine Easterbrook, ae 19, residing Boston, daughter of Amos Burton.2 Sarah J. (Burton) Estabrook seems otherwise daughter of daughter of Amos Burton and his wife, Sarah Merrill.5 Sarah J.'s first husband, Silas Estabrook, was probably the Boston printer by that name who died at San Francisco, California, 24 November 18496; he seems associated with his own bit of fame and mystery.

Sarah J. and Lemuel were almost certainly first cousins, so even if they hadn't lived in close proximity ca1850/1, they would have known each other. As these thing go, they would have been parellel cousins, because their mothers, Mary (Merrill) Preston and Sarah (Merrill) (Burton) Baldwin, would be daughters of Joseph and Sarah (Copp) Merrill of Warren, New Hampshire.7

In the 1850 U.S. census, Sarah J. and her two-year old son were living at Boston, Mass., with the woman presumed her mother, then Sarah Baldwin, who has two-year old daughter, Louisa Baldwin (aka Louisa "Ella L." Baldwin).7

It seems L. K. Preston followed his occupation to Texas. By the spring of 1853, he was testing methods to drop telegraph lines below Galveston Bay for The New Orleans, Red River Texas Telegraph Company.8 The line under the bay failed and the telegraph suffered other setbacks. Through it all, though, he apparently garnered the respect of those seriously impacted--the newspapers--so that he established life long associations.9

The family resided Galveston, Texas, in 1860. Sarah Josephine10 and her son11 died in November 1864 during a yellow fever outbreak. Lemuel remarried in 1865 to Alice A. Duer; yet more children were born to his second marriage including a son, Lemuel Keyser Preston, Jr. The elder Lemuel and family resided Calvert, Robinson County, Texas, at 1870 and also at 1880. L. K. Preston died at Calvert, Wednesday, 12 January 1881 (obituary follows). His widow, Alice, long survived him; she died at Beaumont, Jefferson County, Texas, 23 Oct 1925. 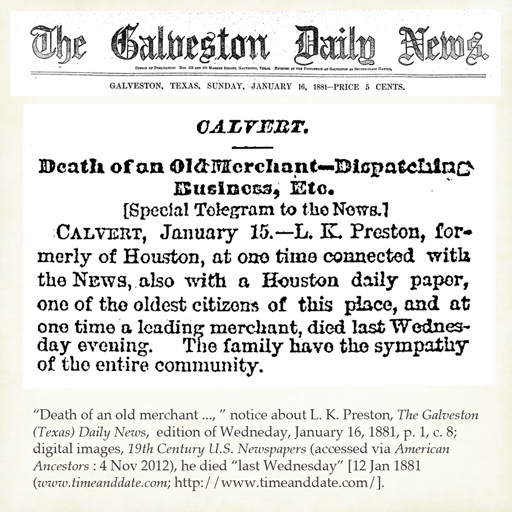 One angle of attack would be to research telegraphy-related news and organisations in Boston around 1850. Also, it is possible that he was in Texas, but returned north to marry? The speed with which he relocated to Galveston after his marriage suggests he already had connections there. 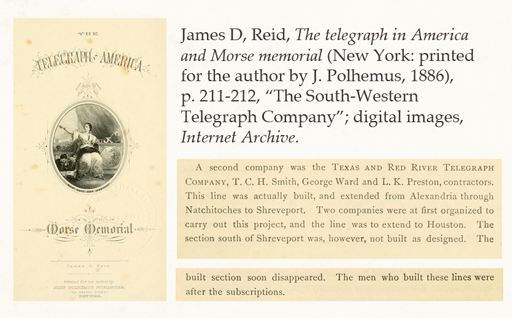 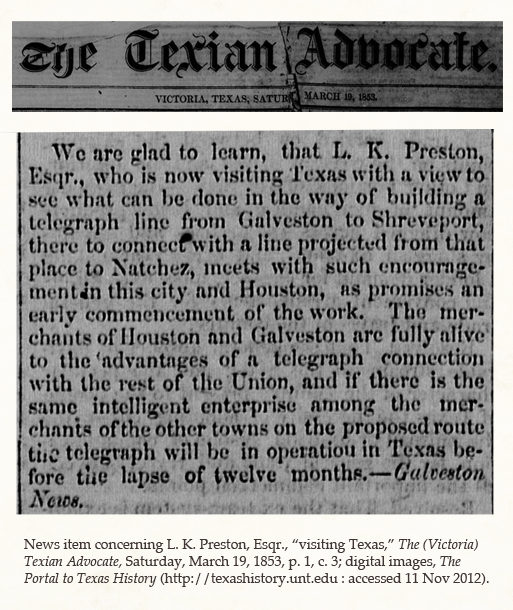 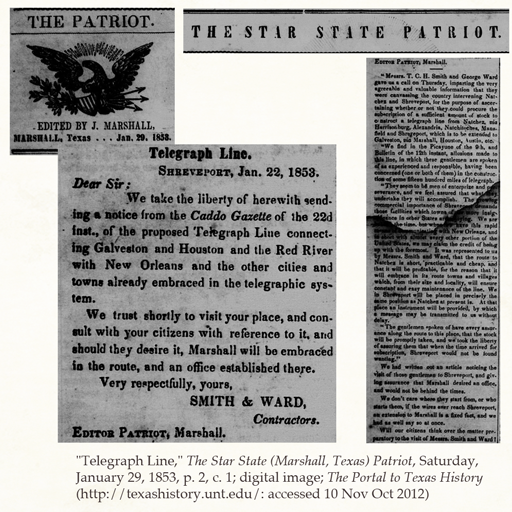 Not the answer you're looking for? Browse other questions tagged united-states 19th-century new-england texas or ask your own question.

14
How to find wife's maiden name in New England in the 1700s?
9
Identifying Lemuel K. Preston's 1830s-era birth place of "Broome, L. C."?
9
Would there be 1830-1850 US naturalization records for children born Canada to parents born in US when relocating back to US?
7
Seeking publication specifics for a 20th century news article (USA)
8
What were the rules about Massachusetts town marriage intentions ca 1811?
1
Finding identity of Eliza Ann Wills who witnessed marriage of Grace Martin Wills and Matthew Nettell in 1865 at Redruth, Cornwall?
4
Finding record of Peter J Starrs in USA prior to 1870 Census?
5
How accurate do late 20th century Genealogical histories of New England in early 19th century tend to be?
1
Identifying Great Grandfather who was born about 1870 in Louisiana, USA?
5
Narrowing down date of immigration from England to USA?