Charles H. Dillon (1889-1967) worked in different capacities for Western Union in Dallas, Texas. In the 1940s and 1950s, he wrote articles about the telegraph for the Texas Almanac and other publications. He also wrote newspaper articles. In 1958, his book, A story of the telegraph and the Western Union and how they reached the southwest was published.

I'd like to learn the name and date of the publication (hopefully with page/column number references).

Digital images of the lengthy article are online by Frank W. Shiels (Fort Worth), Crown Jewels of the Wire, April 1983 Archives (Letters to the Editor).

A graphic of the opening part of the article follows. 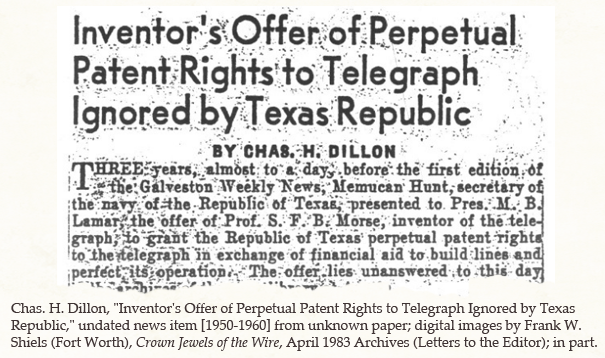 Update 1: This date I spoke with two officials at the Dallas Public Library. While we were not successful in finding the article, I did learn one long standing Dallas paper is no longer published, the Dallas Times Herald. Although issues of this paper are held on microfilm by the Dallas library, no extensive digitization or indexing of its issues has been done. Discussion lamenting all of this online in a 2010 thread, Phorum, "Dallas Times Herald Archives."  (I did find that NewspaperArchives has a very few (about 10) early editions of the Dallas Times Herald in its collection, but nothing that would help me.

Update 2: I heard from Casey Greene, Galveston and Texas History Center, Rosenberg Library (Galveston), over the weekend. As a clipping without further reference, the article appears in their vertical file "Telegraph." It was carefully clipped and then glued to cardboard backing--leaving almost no way of developing further clues about where or when the article might have been published. Although not publication specifics, I now have the next best thing--a solid reference to the vertical file at an established archive. It works for me.

It may be useful to consider the opening of the article:

Three years, almost to a day, before the first edition of the Galveston Weekly News, Memucan Hunt...

Another angle that might be investigated is whether a Galveston historical society or public library has a clippings file which might contain the article annotated with the source.

I think there is a good chance that the "4 cubic feet" of records will contain a clippings file of Chas H Dillon who was an engineer with Western Union but seemed to be a history buff on the matters telegraphic who loved to publish.

Unfortunately, I suspect your answer is behind the paywall at Galveston City Archives as that is where Frank W. Shiels mentions starting his search.

Not the answer you're looking for? Browse other questions tagged united-states 20th-century newspaper texas or ask your own question.