What does the “Copy of Record No” field on a naturalization petition index card mean?

I found the following image, and would like to know where it is referring me. What does the line across it mean? 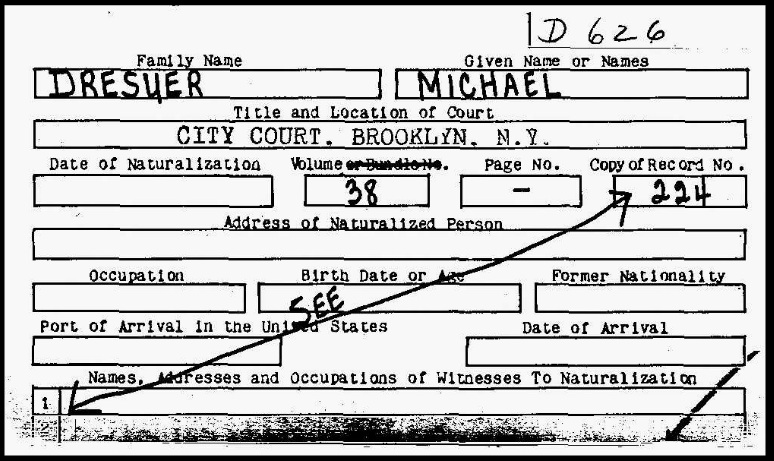 Working from information Robert Hoare provided in his answer, I found Ancestry.com has two similar, but not identical, collections that include New York's index to naturalization records. The earlier 2007 digitized collection is titled, "New York, Index to Petitions for Naturalization filed in New York City, 1792-1989." The later instance is part of a much larger collection (2010) titled, “U.S. Naturalization Record Indexes, 1791-1992 (Indexed in World Archives Project).”

In the earlier digitized collection, I located what seemed the entry/image GeneG had uploaded as part of this question. It cites a particular NARA Northeast Region collection "Soundex Index to Petitions for Naturalization filed in ... New York City, 1792-1989." In this particular digital collection, the 2007 version of the card was indexed as "Michael Dresher."

I searched the Ancestry index for this 2007 digital collections several times; even browsed images, but was unable to find the second referenced card. (Might my soundex be rusty?) 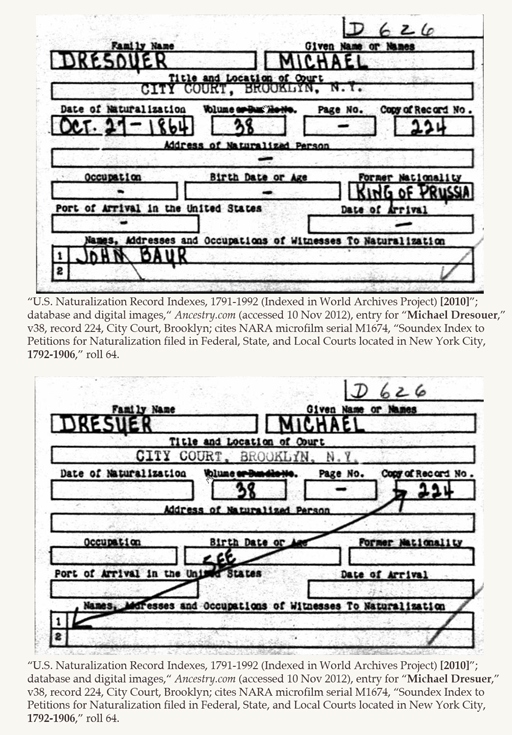 Presumably Volume 38 is a bound volume of naturalization records in the City Court of Brooklyn, and the record of Michael Dresuer was numbered as record 224 in that volume. Your next step is to write to the court with the 38/224 info and ask for a full copy of that record. They may write back and say it has been archived somewhere else and provide you with that info.

The line is labelled as "see" so it is simply referring you to the original record if you want to know who were the witnesses.

The second image has all the normal details that appear on these cards, and almost the same last name as the image in the question. So it appears that the "<-- See -->" on the image means see the other card with the same number, as that is where the information is to be found.

To put it another way, the card above is a cross-reference card with an alternative name spelling, and it is pointing you to the other more complete card.

The more complete card is the other card with the same record number (that's what links them). The card for Michael Dresouer, on image 3500. That gives details like the date and witness. Looking at other records, it's likely that that is all that was on the original.

On this site displaying a similar image, you will read

If that is correct, you will not need to refer back to the court because these are NARA reference numbers that can be used directly.

The form itself is intriguing. A Google Image search correctly identifies it as a Naturalization Record, but among the dozens of images considered visually similar this not a very common type. It seems to have been used only in NYC and is distinguished by NOT having the names of any Federal Agencies on it. (Other types are clearly Dept of Labor INS). My guess is that this was a locally produced index card to reference records that had been taken away from the place they were created.

Not the answer you're looking for? Browse other questions tagged united-states new-york-city naturalization or ask your own question.

13
Where do I find the record pointed to by a naturalization index?
5
What does the occupation “Works in Woods” mean?
4
What does it mean for woman to have the title of Mistress in a marriage record?
2
Why wait more than 3 years to file the Petition for Naturalization?
5
What do C-1 and B-2 mean on 1957 US Immigration record?
8
What was the “Old War” and how should I interpret this pension index card?
8
What does “S” mean in the context of possessing a ticket for the next leg of a journey?
2
What does “Do” mean in the birthplace field of the 1850 US Census?
5
What does “ads” stand for in a Chancery Court record index?