What does the term "Intervale" mean in the context of New Hampshire land transactions and deeds?

I have found the term "Intervale" used in the property descriptions of different Rumney, New Hampshire deeds; these descriptions generally rely on metes and bounds ("from the large rock at the stream to the ...").

Image that follows comes from a 1786 Rumney/Grafton deed, recorded in the early 1800s (ref. 1); includes the text (underlined), "a point of Land which runs into the river & joins to my Intervale Land ..."

Another image; transaction from the early 1800s (ref 2), recorded about that time. "... the Northwesterly corner of the Intervale of said farm ..."

Last night I had the opportunity to browse images of the Rumney Town Clerk's books (Family Search, New Hampshire, Town Clerk, Vital and Town Records, 1636-1947). In the first couple pages (late 1760s) of what I otherwise believe Rumney's town clerk book A, I found a long list of references to what appear land transactions--generally referring to Intervale lots.

Image follows, but by clicking HERE, you can see the full page. 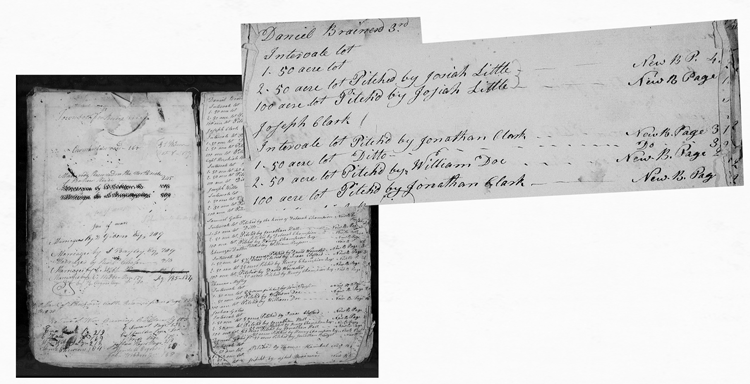 I'm wondering what this term means in the context of these early records, as it seems to have been retained in the metes and bounds descriptions later referenced.

While reading the question it reminded me of something I'd seen when researching U.S. Land Grant records pertaining to my Wife's Family in Massachussetts. A quick search verified my hunch, I've linked below to the free dictionary and below the link you"ll find the details of which you"ll see at the link only in smaller detail.

in·ter·vale (ntr-vl) n. New England A tract of low-lying land, especially along a river. [Variant (influenced by vale) of interval.]

The description goes on to provide a "Regional Note" saying that the term was used notably in "New England terms mapped by Hans Kurath" (cites Linguistic Atlas of New England in the 1940s).

Interestingly enough, the entry goes on to say that language surveys of the same area just 20 years later found that "only three speakers in 72 New England communities used the word intervale to indicate a 'tract of low-lying land, especially along a river.'"

The referenced source also speculates about how/why the term may have come into early use in New England.

A preliminary search yielded only a definition. From the OED:

In N. America: A low level tract of land, esp. along a river;

Orig. in New England, but now used in some other parts of U.S. and in Canada. The sense is the same as that of haugh in Scotland.

It records it as first used in 1632 and the last quote is in 1884. Another entry states it can also be spelled "interval" with the same meaning. I have also seen it spelled "interviel" in some texts.

However, per GeneJ's comment, it is 60 miles away and is irrelevant to this discussion.

After reading the Grafton gazetteer (open and scroll to p. 603-604), however, I have a new hypothesis. I read that:

The settlement of the town was begun in 1765, by Captain Jotham Cummings, Moses Smart, Daniel Brainard, James Heath and Alexander Craig. That the settlement increased quite rapidly, and that Daniel Brainard, Esq., had made himself owner of most of the land in the township is proven by the following statement of grievances addressed to the Assembly in 1770:--

"The humble petition of us the subscribers being proprietors & inhabitants of the town of Rumney in said province most humbly sheweth that Daniel Brainard of Rumney aforesaid Esq. claims & votes upon the major part of said Township in all proprietary meetings and as the law of this province allows every person to vote accordingly to the quantity of his interest the said Brainard makes use of his power to oppress & injure your Petitioners in the following instances, viz't

A number of grievances are laid out, but this one is relevant:

"Fourthly. The intervale is not equally divided.

This was in 1770. Other references within the text lead me to believe that there was one intervale in Rumney (as is shown by maps). All references to "intervale" meant that one "intervale". It was on the south side of the town and Bakers River ran through it. As the most fertile piece of land in the area, there would have been the most disputes over it. The definite article before it in the quote shows that there was only one.

road is to be three rods wide on the upland? & two rods wide on Intervale, to run from said hill as straight as it will allow of the joint of the hill where the road was once improved near the river, thence to keep as near the river as it will conveniently admit of 'till it comes about twenty rods into Mr. Ingrahams improved land.

As there was only one river in the town (Bakers River), I believe this is clear evidence that the "Intervale", referenced to in the records, was the intervale on the south side of the town, which Bakers River ran through.

emphasis in all quotes above mine

I am just trying to find some history/etymology on the word intervale. I live in Margaree Cape Breton Nova Scotia where we have a lot in common culturally with the Maine and New England area. However, I assumed my partner's deeply french acadian family informed their use of the world "intervale" to describe their hayfields and pasture lands along the Margaree River Valley. I'm actually just trying to find out what kind of word I can use to name my flower farm business that operates.. you guessed it.... on an intervale. Anyways I thought I'd just drop in here and say that the term intervale is alive and well in Inverness county! Almost everyone has a pice of land connecting to the river and they always call that section between the road and the river the intervale.

Not the answer you're looking for? Browse other questions tagged united-states 18th-century land new-hampshire or ask your own question.

8
What is the significance of a "right of dower" in this 1830s era deed (Ohio/New Hampshire, USA)?
14
Locating New England telegraph man (Lemuel Keyser Preston) ca1850?
8
What were the rules about Massachusetts town marriage intentions ca 1811?
8
What does "S" mean in the context of possessing a ticket for the next leg of a journey?
4
What does "Containing by Estimation Seven Days' Work" mean in 1810 Land Auction advertisement?
4
Minimum age to be mentioned in a will?
4
What is this percentage column in the Virginia Land Tax Records?
2
What does "care of" mean in the 18th century with respect to letters?
1
What does branobilis/braenobilis mean?
3
What does C.N.B.L. on New Hampshire death certificate mean?