What were the rules about Massachusetts town marriage intentions ca 1811?

They say sex and scandal sells. Maybe an updated question that adds a little of both will spice up and clarify my question.

For years I have recorded Massachusetts marriage intentions in my family file. Sure, there are errors and suspected omissions, but I never thought about these intentions in terms of record bias. All that has changed because of the case of John Preston and Mary Cook, 1811, Gloucester, Massachusetts.

I'm on a quest to learn more.

In order to figure out if these intentions were subject to bias, I think I need to understand how the process actually worked. According to the City of Gloucester: Marriage License site, filings today require both parties to appear.

Would both parties have been required to appear in 1811? How did these intentions (aka "publishments") come to be and what form did they take? For example, did someone ask the town or church to publish the intentions? Were the intentions just announcements pinned to the church or courthouse door? In 1811, would these have been published in a local paper? Who could order the publication?

For the most part, I wouldn't think record bias would be very likely if both people were from the same town. In the puzzling case of John Preston and Mary Cook, however, the intended parties are not even from the same state.

A long, long time ago, the marriage intention between "Miss Mary Cook [of Gloucester]" and "John Preston of Rumney, State of New Hampshire" dated 22 June 1811 was recorded in the "Publishments" of Gloucester, Massachusetts (partial page image follows). A corresponding New Hampshire intention has not been found; no record of a marriage between the couple has been located in either place. 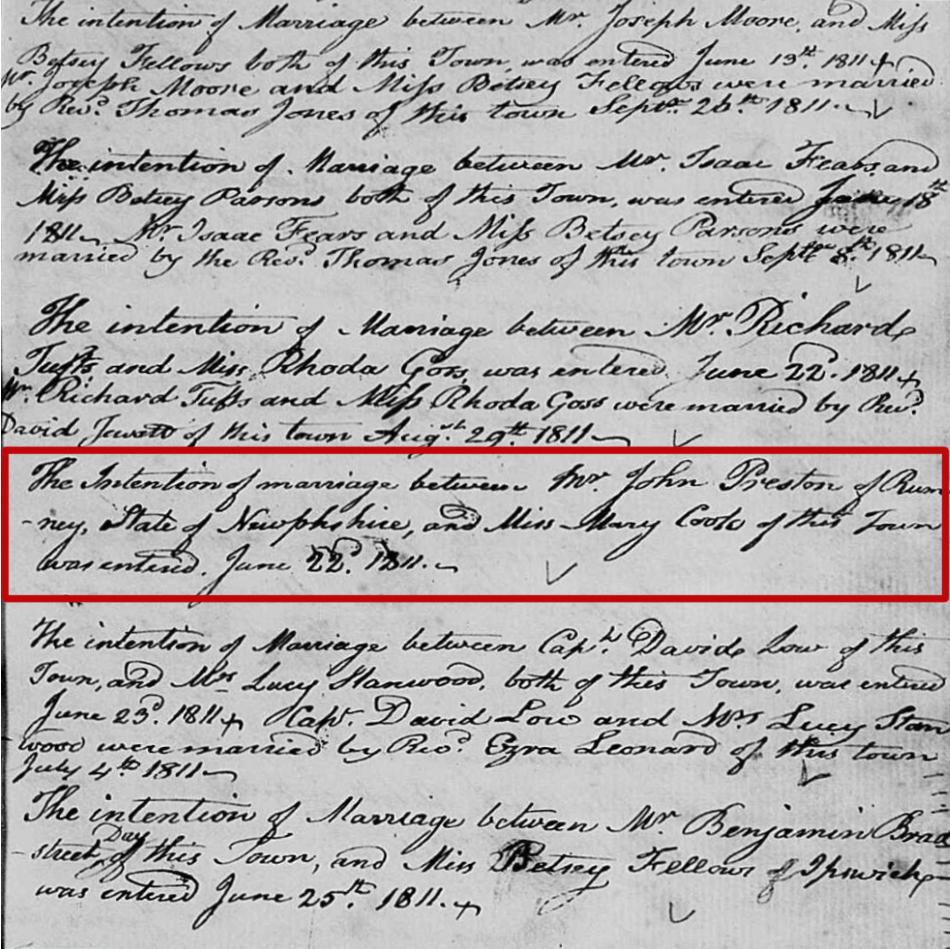 From separate research, the man noticed in this record is almost certainly John Preston born 5 Dec 1789, at Rumney, son of William Preston and Elizabeth Clark. John was the brother of my ancestor, William Preston. These two brothers are said to have been soliders in the War of 1812 who became the first white settlers of modern day Defiance, Ohio, after the war.(note 1) John Preston died at Defiance 7 May 1819.(note 2)

As part of the bigger task to advance the proof about these brothers, our family has worked a timeline at both New England and Ohio. The last (latest) known record about either of the brothers at New England had been this 1811 marriage intention.(note 3) Likewise, the earliest record of either man at Ohio is the Miami County marriage 13 October 1814 of John Preston to Sophia Ewing, dau. daughter of Alexander Ewing of Fort Wayne fame.(note 4) Ewing family materials refer to Sophia's husband separately as "Captain Preston" or "Captain John Preston."

I had assumed John Preston was present when the 1811 intention was filed and was working from the hypothesis that he remained at New England long enough for the intention to somehow dissolve, but left soon enough to see service in the war and court his bride, Sophia (probably both at Ohio).

Sex? Scandal? We took the case to Jane Walsh and the Gloucester Archives a year ago, hoping to learn more about how the intention was resolved (breakup, marriage, divorce). Jane could find no record of a marriage or marriage dissolution, but she found research partially identifying Mary Cook (note 5) and reporting her first two children as Martha Perkins (said born 4 November 1810) and John Preston (said born 5 February 1813).(note 6)

As "Miss Mary Cook," the 1811 intended bride married Zebulon Parsons some 10 years later; it seems the only known marriage associated with this Mary Cook. Births of three Parsons children to Mary and Zebulon were recorded at Gloucester.

Failure to confirm birth of John Preston, 1813: John Preston's birth is not reported in Gloucester's vital records (nor seems the earlier birth of daughter Martha Perkins). While the research is recent and ongoing, notice of these births has so far not been found in the Gloucester town books (now browsable as part of the FamilySearch Historical Record collections).

If Mary Cook's son John Preston was born in 1813, it seemed not impossible, but less likely that he was the son of John Preston of Rumney. However, the information I developed about this son suggested a birth in 1812 (ala, probably 5 February 1812). For example,

If Mary Cook's son, John Preston, had been born in 1812, it seemed likely he was son of my Rumney man--but that analysis supposed dear John Preston (1789-1819) had been a participant in filing the marriage intention.

Wondering whether or not he had to be a participant brings us full circle to inquiring about the customs and practices of filing marriage intentions at Massachusetts in 1811.

A notice of intent performs the same function as a bann ie it puts the communiti(es) on notice in case they want to object. See this answer

If the bride and groom to be are from separate towns, they'd probably be published both places, but both records may not exist (or be known). The lack of a marriage record could mean that they weren't married, they were married somewhere else, or the record is lost.

You don't describe how this record "materially complicates" things. Typically each additional piece of information is a benefit to understanding the entire situation.

My go-to source for that time period in Massachusetts is Samuel Freeman's manual for town clerks, which goes by the absurdly long title, The Town Officer: Or, The Power and Duty of Selectmen, Town Clerks, Town Treasurers, Overseers of the Poor, Assessors, Constables, Collectors of taxes, Surveyors of Highways, Surveyors of Lumber, Fence Viewers, Field Drivers, Measurers of Wood and Other Town Officers, as Contained in the Laws of the Commonwealth of Massachusetts, With a Variety of Forms for the Use of Such Officers, To which is Prefixed the Constitutions of Said Commonwealth and of the United States: and Thereto is Added the Power and Duty of Towns, Parishes, and Plantations, a Plain and Regular Method of Keeping Town Accounts, and a Table of Crimes and Punishments, Also, an Appendix, Containing Some Inspection and Other Laws at Large; with Other Useful Matter

For short, I call it The Town Officer. Yes, this is a secondary source. It is not the law codes themselves (though it does quote quite a few of them.) But I'd argue the town clerks of this time period were not generally lawyers. They would have used summaries like this to guide their duties.

The 7th edition of The Town Officer is from 1808 and you can read it on Google Books here: https://books.google.com/books?id=ethCAQAAMAAJ&printsec=frontcover&source=gbs_ge_summary_r&cad=0#v=onepage&q&f=false

Page 104 and 105 cover marriage intentions. Nothing is said about both parties needing to appear. What it does do is quote the 1786 law:

Persons desiring to joined in marriage shall have such their intentions published at three publick religious meetings, on different days, at three days distant exclusively at least from each other, in the town or district where they respectively dwell or shall have their intentions of marriage posted up by he clerk of the town or district for the space of fourteen days, within the same town or distinct fairly written: and shall produce to the justice or minister who shall be desired to marry them a certificate under the hand of the clerk, of such publishment, and also that the intention of marriage hath been entered with him, fourteen days prior to the date of said certificate,

8
Migration route from New Hampshire to Ohio ca1810-1816?
8
What is the significance of a "right of dower" in this 1830s era deed (Ohio/New Hampshire, USA)?
9
Identifying Lemuel K. Preston's 1830s-era birth place of "Broome, L. C."?
9
Would there be 1830-1850 US naturalization records for children born Canada to parents born in US when relocating back to US?
14
Locating New England telegraph man (Lemuel Keyser Preston) ca1850?
10
Did 19th century English women sometimes change the first name they used?
13
How would you handle a census record that is almost certainly the target family but which has too many discrepancies?
11
Could an Ohio resident be in the Indiana militia? (Timeline resolution)
5
Searching for birth record for Lucy Pratt Stowell b circa 1813 Norfolk/Plymouth Co, MA
4
Who were the wives of John Ervin (1791-1843)?