What can I learn about Sir William Brereton based on his portrait?

This portrait of Sir William Brereton (1550-1631) hangs in the Detroit Institute of Arts: 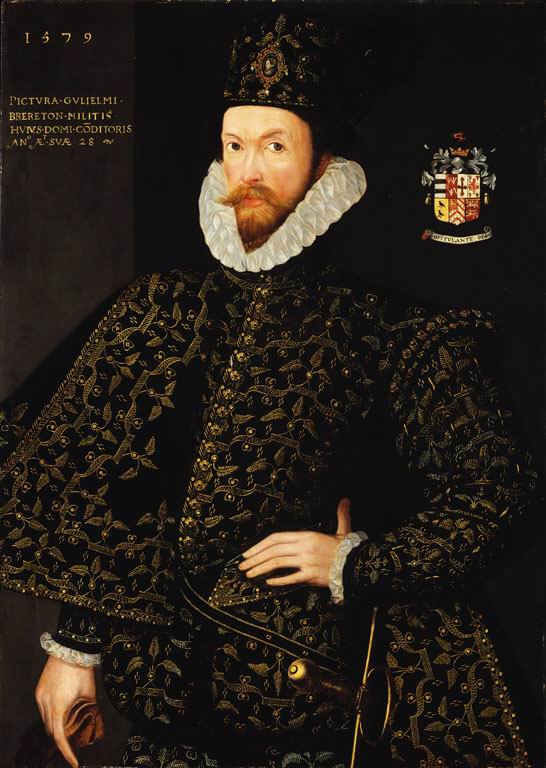 Regarding the portrait I have the following questions:

I can help a bit with the translation:

"coditoris" looks like a third declension adjective, and its ending signifies that it is in the nominative or genitive case, so it could modify either "picture", "William Brereton", or the "this soldier".

For your third question, if you're asking whether there is there a longer version of "Opitulante Deo", then I can tell you that according to this site, there is:

Which is translated as:

God being my helper I will speak what I think.

I think I've made some progress on the last line. I couldn't figure out the first part that has the "AN" with an "o" superscript and "e" subscript but the next part, "AET-SVAE 28" I believe means "28 years old". "SVAE" is actually "suae" which roughly means "of his own" and "AET" is an abbreviation for "aetas", which means "age", and wikipedia says this about it:

So I presume this means that the painting was made of William Brereton at age 28, since the translation for the last line is "of his own age 28".

To sum up the conclusions one can draw from the Latin:

Regarding the second question, after a little googling here's what I have so far:

FOUNDER OF THIS HOUSE

So 1579 fits as the year of production

To add to what others have already provided, Coditoris may be intended to be Conditoris, or founder -- so Huius Domi Coditoris would be Founder of this house.

I think you have a typo in your motto.

Opitulante Deo - With God as my helper

Are your Breretons from Cheshire?

According to the account at http://www.brereton.org/portrait.htm, the female figure on the cap is Queen Elizabeth I

The word “militis” means that he is a knight; he is in fact not wearing military clothing, but fashionable dress. The sword and belt are customary accessories of a gentleman.

Not the answer you're looking for? Browse other questions tagged images portraits data-derivation or ask your own question.