Help needed reading a place of birth in an 1871 census record from Glamorgan, Wales

I'm struggling to read the place of birth of Elizabeth Jones (Head of household schedule 167) in this image from the 1871 census of Merthyr Tydfil, Glamorgan, Wales. 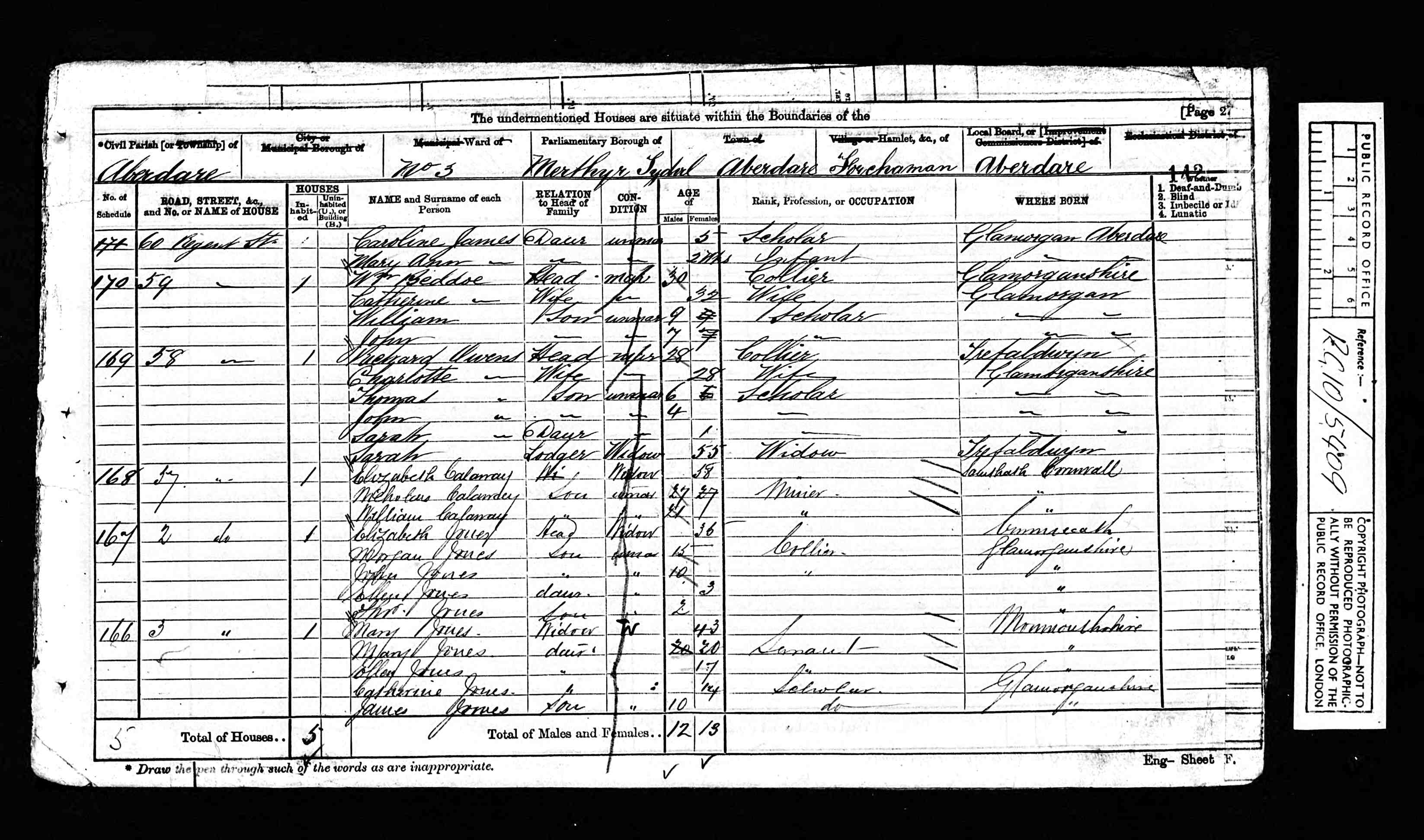 Here is a larger image of the problem word.

Step 1: Check a gazetteer There are several published gazetteers for Wales but none are anything close to comprehensive. The Melville Richards Archive is the best source at http://www.e-gymraeg.org/enwaulleoedd/amr/cronfa_en.aspx where you should be sure to read the user guide for search tips.

Step 2: Find the person in every census during their life time. Census records may provide different clues from one census to the next. Until you have found your ancestor in every available census don't give up. Their birthplace may be identified more clearly in another census.

Step 3: Search records that list place-names within the parish:

Step 4: Examine maps The Ordnance Survey six inch to one mile scale maps will identify most farm names and places in the area where the family lived. Browsing the place-names in the area where a family lived may help solve a place-name problem. County record offices and the National Library of Wales should have the detailed maps needed. The Landranger and Pathfinder series of maps can be purchased and may be useful but are modern publications and not nearly as detailed as the the early editions of the six inch scale maps.

Step 5: Contact the local history society Local and family history societies often have members who are very familiar with the area. They may already have solved the place-name problem during some of their research.

Step 6: Learn more about the family in question. Find out as much about the family as possible. Don't depend only on the census. Find the marriage. Order birth certificates to verify information about the parents.

I believe the name starts with either "Cwm" or "Crwm". There is a bit of a stroke after the ending loop of the "C" which could be interpreted as an "r". Many Welsh place names start with "Cwm", and a few start with "Crwm", so either is plausible.

I'm pretty sure the name ends with "th". The "t" is a common form which makes a half-crossing stroke without lifting the pen by continuing from the bottom of the ascender and curving into a short horizontal on the right side of the ascender (which here is continued into the "h"). There are similar examples elsewhere on the same census sheet.

The middle letters are a muddle to me. My best guesses might be "seca" or "reca", but really there many unsure interpretations for these mysterious strokes.

The best way to resolve this would be to look at a few comprehensive Welsh gazetteers or place-name lists for names beginning with Cwm or Crwm. Unfortunately I can't recommend any, and did not find any in a limited web search. The best I turned up was this Ordnance Survey guide. The only name I encountered that might fit with my guesses was "Cwmcrwth".

You are not the only one who had trouble reading it ;) The person transcribing the 1871 census for Family Search also couldn't decipher it and they left it blank.

As @Jeremy mentioned, I think that this begins with Cwm... My best guess is "Cwmreash" or "Cwmrecash" with the second last consonant being a strong "s". Trying to say this in your head with a Welsh accent, might help you to imagine how an enumerator might misspell the word. Perhaps an "sh" should really be a "th" or "dd"? Perhaps the middle syllable got slurred? Roll it around on your tongue.

Here are a couple places around Aberdare:

Also, could this be not a lost town, but a region? Glamorganshire is mentioned numerous times, so is Monmouthshire... Could it be a lazy-man's version of Carmarthenshire or Carmarthen?

I feel pretty confident that the prefix of the place is "Cwm" - this is a common prefix in Welsh - it means "valley", and it pronounced "koom" (rhyming with "room").

I agree with the other answers, but found one other (far-fetched) possibility. Google Maps has a "Cwmcathan Isaf" about 30 miles away from Aberdare. I think that the place written might be "Cwmcath", short for "Cwmcathan".

I think it's Cwmneath. Aberdare is in the Neath valley and if you look at a map of South Wales, you'll see a road, the A465, called the Heads of the Valleys Road which runs from Merthyr down to Neath through an area called the Vale of Neath. Between Merthyr and Neath you'll see Aberdare, so I think this was an old area of Aberdare

I don't know if you ever solved this problem, but I may have found a solution.

Given the way the same person has written the "w" in Trefaldwyn a few lines above, I wasn't convinced of the "Cwm" theory, so I looked further.

Working on the theory that she might not be local (having not fond a suitable place in wales starting with a C, ending with "th"), I had a look at the UK place names list, and came up with Carnwath (Lanarkshire) as a theory.

So I then searched for Elizabeths born in Carnwath at about the right time, and found a Smith, Harrison, Macqueen, Stark and Cowper. There was an Elizabeth Smith who married in Merthry Tydfil in December 1856 (which fits with the first child being born in 1858), as did Samuel Jones. There were plenty of Samuel Joneses who died in the right years for the youngest child to have been born, and for Elizabeth to be widowed. The most likely candidates were buried in Merthyr Tydfil. However, one was 33 and the other was 50. Both are possible, but slightly improbable.

That is as far as I have gone with this theory.

5
How can I learn about a Trade Union activist in the South Wales coalfield in the 1890s and 1900s?
7
Help needed reading an occupation and place name
3
Identifying photograph which may be Margaret Morgan (1808-1902) taken at Bridgend, Glamorgan, Wales?
2
Reading place of birth in France on 1881 Census for Camberwell (London)?
8
Strategy to find death of individual with common name?
4
Reading 1625 burial record from East Quantoxhead, Somerset, England?
5
Looking for birth record of Catherine Jones in Llanfynydd, circa 1882
5
Determining a relationship from the 1871 census?
5
Where did this baptism take place?
3
Seeking 1880 Birth Record of Santa Catherine Gazzanovich at Brecon, Wales?