Many of my German ancestors seem to have come from a place called Plotzk, Bessarabia. They ended up in South Dakota, many in Parkinston, Hutchinson County, SD.

Here are some examples of a few of them:

From what I understand, Bessarabia no longer exists. Where can I find out more information about it?

Would there be birth records stored somewhere?

Would there be cemeteries or unmarked graves? Was all trace of the German settlers who lived there for only a few generations wiped out? 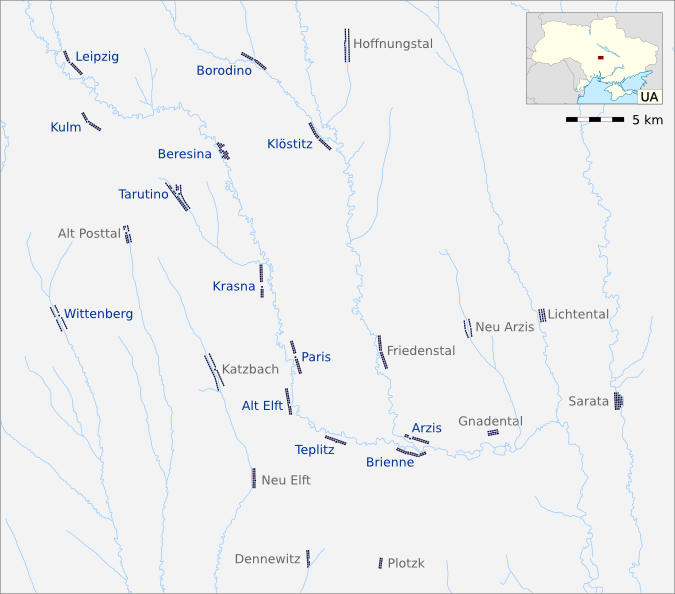 These describe how the people you are interested in got to Bessarabia; how they got to the US should be findable as with any other immigrants: through ship manifests, passport and naturalization records, etc.

I don't know whether these can be viewed on-line, but otherwise you can probably order some for viewing in a local Family History Center.

There are several primary North American sources for research on the ethnic German population in Bessarabia. The Germans from Russia Heritage Society, headquartered in Bismarck, North Dakota, has many members with a Bessarabian background. GHRS has a Bessarabian Regional Interest Group (RIG) -- a virtual chapter of the organization -- that makes many resources available to its members. The other resource center is the Germans from Russia Heritage Collection at North Dakota State University.

Previous answers have omitted the German (and Russian) language resources.

The German genealogy wiki page Bessarabia has large list of resources and links. The following paragraphs (translated to English) may be of interest:

...The church books (like all official documents) of Bessarabian German villages could not be removed in the resettlement of 1940 (according to the resettlement agreement). However, they were partly transferred in the subsequent recapture of Bessarabia in 1941 by German and Romanian troops to Berlin, where they were handed over to the Reichssippenamt. A detailed article on the whereabouts of Bessarabian church records can be found in the "Heimatkalender der Deutschen aus Bessarabien", 1993, pp.165-180.

Some of the church books from the territory of Bessarabia, belonging today to Moldova, are in the National Archives in Kishinev. The Church of Jesus Christ of Latter-day Saints (Mormons) in Salt Lake City has microfilmed copies of these documents. The Heritage Museum of the Germans from Bessarabia in Stuttgart has received copies from Kishinev.

About 350 original church register volumes and approximately 100 (filmed 1941 in Berlin) microfilms of church records documents from Bessarabia are available at the Deutschen Zentralstelle für Genealogie (German Central Office for Genealogy) in Leipzig. They are not complete, some are only a few years of family books or church events, such as baptisms, weddings, available. Detailed information is contained in the book "Die archivalischen...Kirchenbuchunterlagen deutscher Siedlungsgebiete...Bessarabien..." (full title in literature list later on page)

I recommend contacting FEEFHS (http://feefhs.org/) and EEGS (http://www.eegsociety.org/Home.aspx), two genealogical societies that have active member rosters who know a lot about doing Bessarabian research. I believe both also publish quarterly or semi-annual journals whose back issues may cover how best to do research in this situation.

9
Finding 1910 map of Russia?
5
Where to find information about Grünberg and Rosenbaum relatives from Danzig?
7
What is this city name in this passenger list from Russia/Poland in late 19th/early 20th century?
6
Finding Listing of Polish Soldiers that were forced to fight with Germans in WWI?
4
Seeking Russian Orthodox Church Records 1840-1900 for Lagody, Poland/Russia (now Belarus)?
4
Finding a town in Russia-Poland from 1910
2
Finding original surname of Anton Orsik who immigrated to United States from Russia (Lithuania)?
1
Traveling from Russia in 1906