Can I obtain a free version of this public domain image?

I found an image on the Corbis images website: 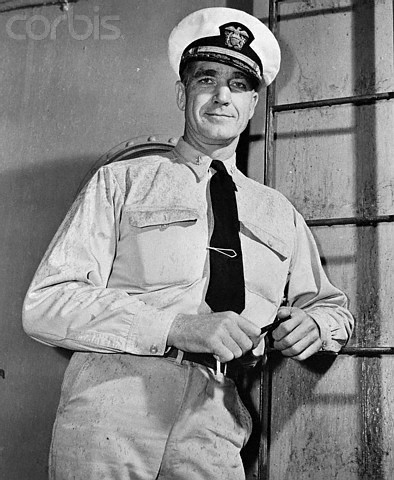 At the end of the description there is a small note:

This is a publicly distributed U.S. government created image. Image is in the public domain.

If I cannot obtain a copy freely via Corbis (it does not seem that I can), presumably there is a copy somewhere else that is. Would such a source be online, or is the value Corbis adds to the image the fact that it is available electronically?

This image comes from the Bettmann Archive, an extensive collection of negatives and prints that Microsoft purchased and rolled into Corbis (to much anguish from historians). As the note indicates, they do not own the image but they do hold the rights to its digital representation.

I would assume that the image was taken as a piece of Navy PR to capitalise on the public interest in the Marblehead action. My guess is that it almost certainly appeared in a San Francisco paper in mid-1942 (hometown hero story) or was recycled when the movie was released on 4 July 1944. So I would head to the newspaper archives.

On 18 January, The Legal Genealogist published a post called Copyright, Corbis & terms of use that bears directly upon this issue.

Not the answer you're looking for? Browse other questions tagged military-records navy images copyright or ask your own question.

5
Why aren't census images made available by the US government?
24
Who are the individuals silhouetted in this image?
4
Can anyone decipher the name of this Royal Navy ship in Beruit in 1861?
7
How can I ensure that I am making a reasonably exhaustive search?
8
How can I process this image to extract more of the information
6
Can this Verlustliste record be excluded or verified based on what (little) I know?