One of the people I am researching appears to have changed her name: in the 1915 NYC census she appears as Reva Osernoff, living with the Axel family:

But in her marriage record from 1937, she appears as Riva O Axel.

This suggests that she adopted the name of the family with which she lived most of her life, which is not that surprising. My question is whether this kind of a name change would be documented somewhere. In particular, would her original parents' names be likely to be listed there? (I know her father's name from family lore, but not her mother's name.)

The answer to this question would differ between countries and even between states within countries. As an example, in Queensland Australia, a person's legal name can become that of the name they are known as. If a male marries and the wife's child starts using the male's surname, this becomes their legal name as soon as it is recognised as their surname. Sorry if this does not make sense, I could not word it properly.

I can't comment on the legal situation in NYC but I can give one pertinent example of a documented name change.

My Great-great aunt, Augusta Barclay Bruce, emigrated to the USA in 1909. She informally (presumably) and intermittently altered her name in Kansas City by dropping the first name and using Barclay as her given name. She then moved to New York City in the 1920s where she increasingly used Barclay as her first name, eventually dropping the Augusta.

When it came to submitting her Petition for Naturalisation to the Southern District Court of New York in 1938 the petition was made out for "Augusta Barclay Bruce, also known as Barclay Bruce" and in fact it includes a section formally requesting the name change to Barclay Bruce. So this is one possible documentation for the change of name.

Clearly, since this includes the formal request, she has nevertheless been able to use the new name without formalities for at least some purposes (e.g. censuses). Indeed, in 1936, she submitted her SS5 application for the US Social Security system in the name of Barclay Bruce, even though there was no formal change until 2y later.

The other relevance of the SS5 is that it gives her parents' names.

Prior to 1875 a change in a personal name could be accomplished through a special act of the Legislature. In addition, an 1847 statute authorized a court proceeding for the same purpose. Any person over age 21 could petition a county-level court to issue an order changing his or her name.

Starting in 1861 and continuing through 1912, lists of names changed by the courts (stating the old and new names, date of change, and court ordering the change) were published in the annual session laws of the Legislature. The court order changing a personal name is recorded in the county clerk's office in the county where the person resides.

This doesn't help us for your particular problem because your example takes place after 1912. However, you could look for:

Clues to a person's Naturalization status can be found in some census years (see Further Reading).

Regarding the discrepancy between Reva Osernoff living with the Axel family in 1920 and 1930 and later Reva O. Axel in her marriage record, have you considered the possibility that Reva Osernoff married one of the Axel brothers and then was widowed? That would account for both the name change and the middle initial O. Have you located death records and/or obituaries for all of the male Axels in these census records? Perhaps one lists a surviving spouse with a name similar to Reva.

Researching the variations and possible alternative transliterations of her name (Reva/Reve/Riva Osernoff/Osenroff/Osinov etc.), we find a declaration of intention for naturalization for Reva Osernoff dated 24 Sept 1926. This declaration says she was born in Starai Russa, Russia on 8 June 1904 and resides (as of 1926) at 2435 Dickens Ave, Far Rockaway, NY. She emigrated from Hamburg, Germany on the Imperator in October 1913, arriving at the port of New York on or about the 30th October 1913. 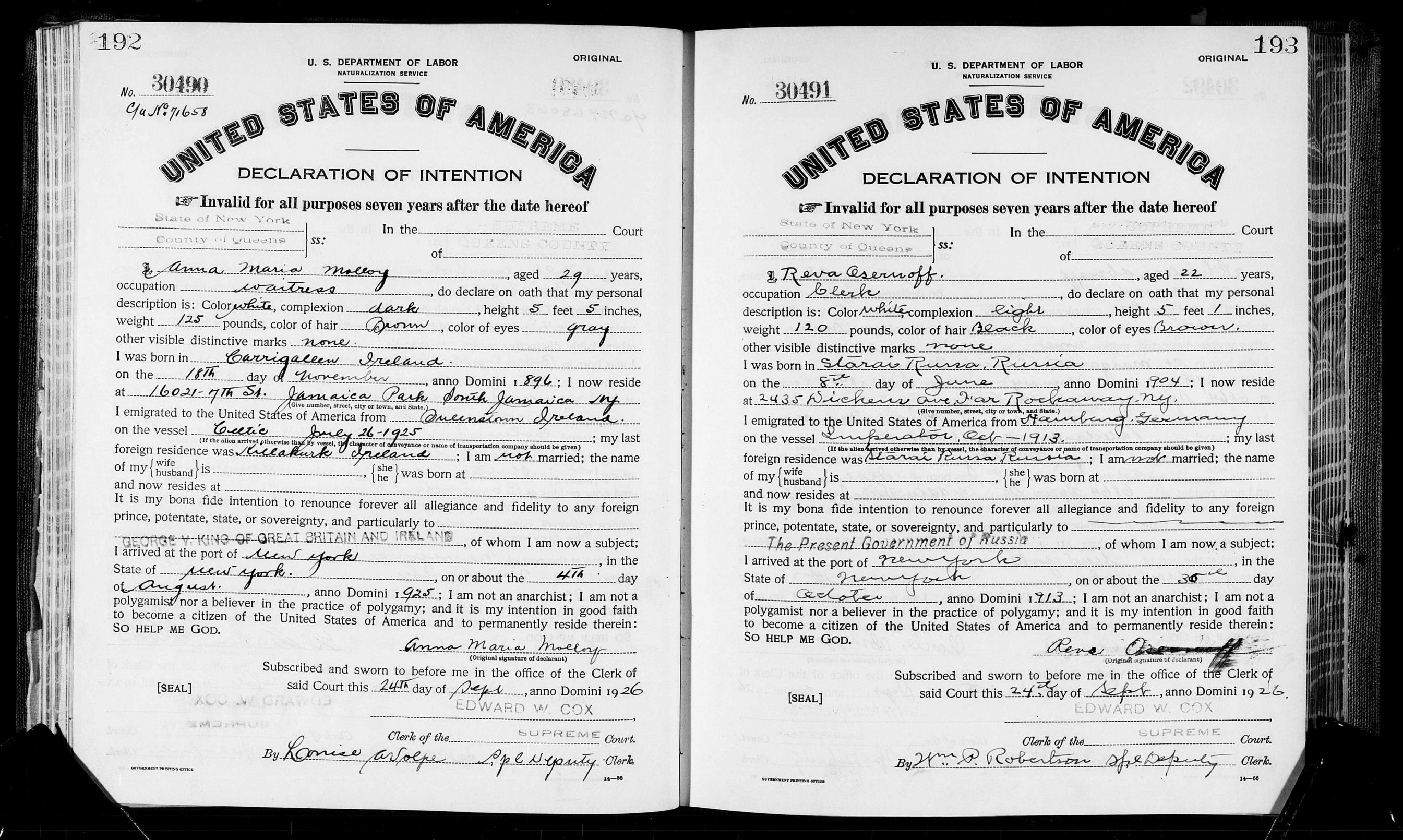 Searching the immigration records, we find a likely candidate. On the New York side, the Imperator arrived at the Port of New York on 29 October 1913, having sailed from Hamburg on 22 Okt 1913. Among the passengers is a 9-year-old Hebrew Russian girl (born ~1904) named Riva or Rive, born in St. Petersburg, Russia. Her last name was originally written Asernova, but that is scratched out and Oscinofsky is penciled above. If you pronounce either of those, they are close to Osernoff. According to this two-page record, Riva last lived in Samolta, Russia.

In at least three places in this immigration record, Riva's line 15 is tied to line 14 with a curly brace, seeming to indicate that lines 14 and 15 are traveling together. Line 14 is Edna Margolies, age 25, a Hebrew Russian woman born in St. Petersburg, Russia, and living in Brooklyn, NY, with her husband H Margolies. The nearest relative of both Edna and Riva, connected by a curly brace, is "parents: S. Plattstein (?)," St. Petersburg. It appears that there was another name on the page that was cut off by the imaging. As evidence for enough space for a missing name, there is a stamp that presumably says "NON IMMIGRANT ALIEN" but all you can read is "NON IM" on one page and "NT ALIEN" on the other. 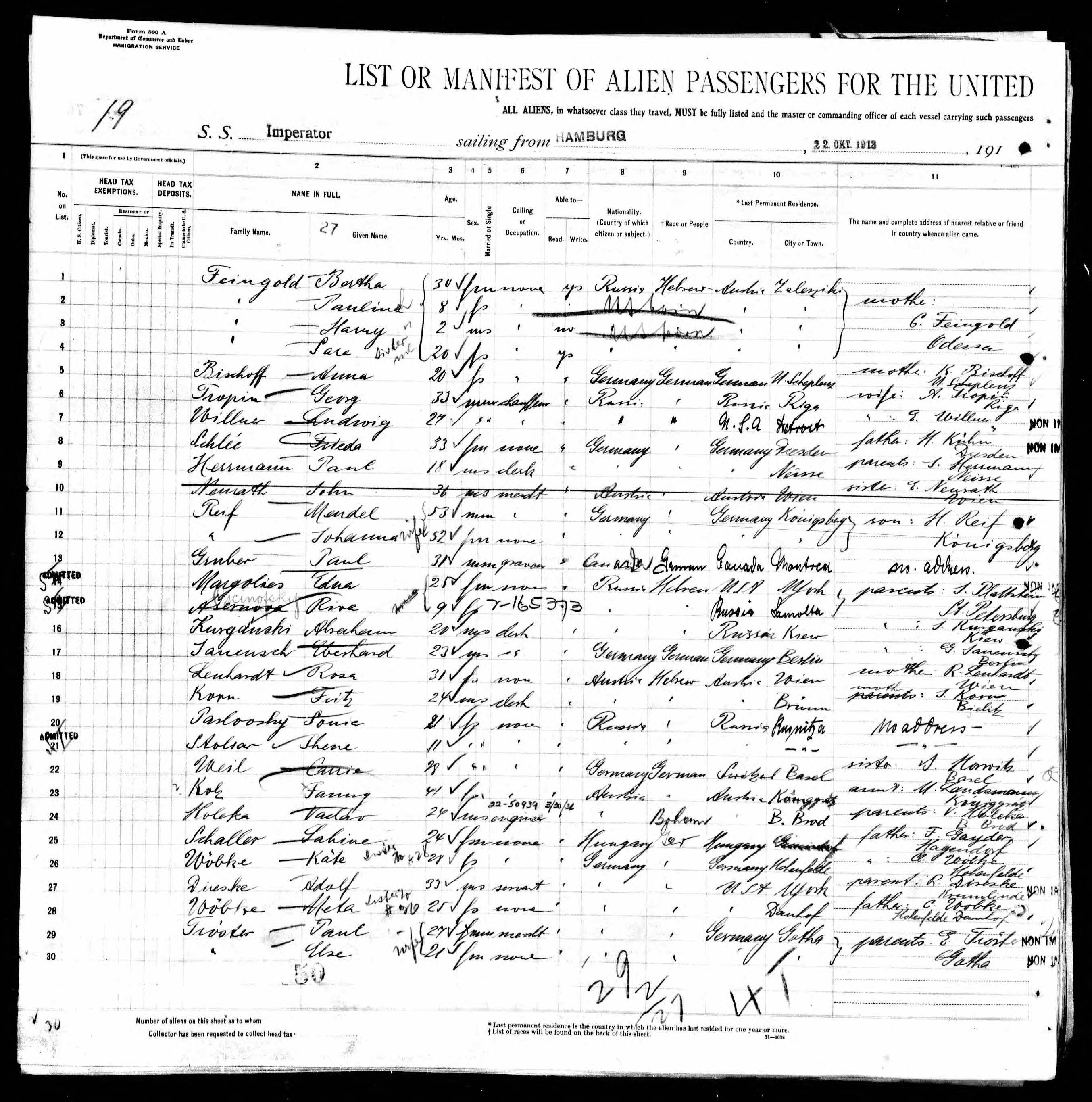 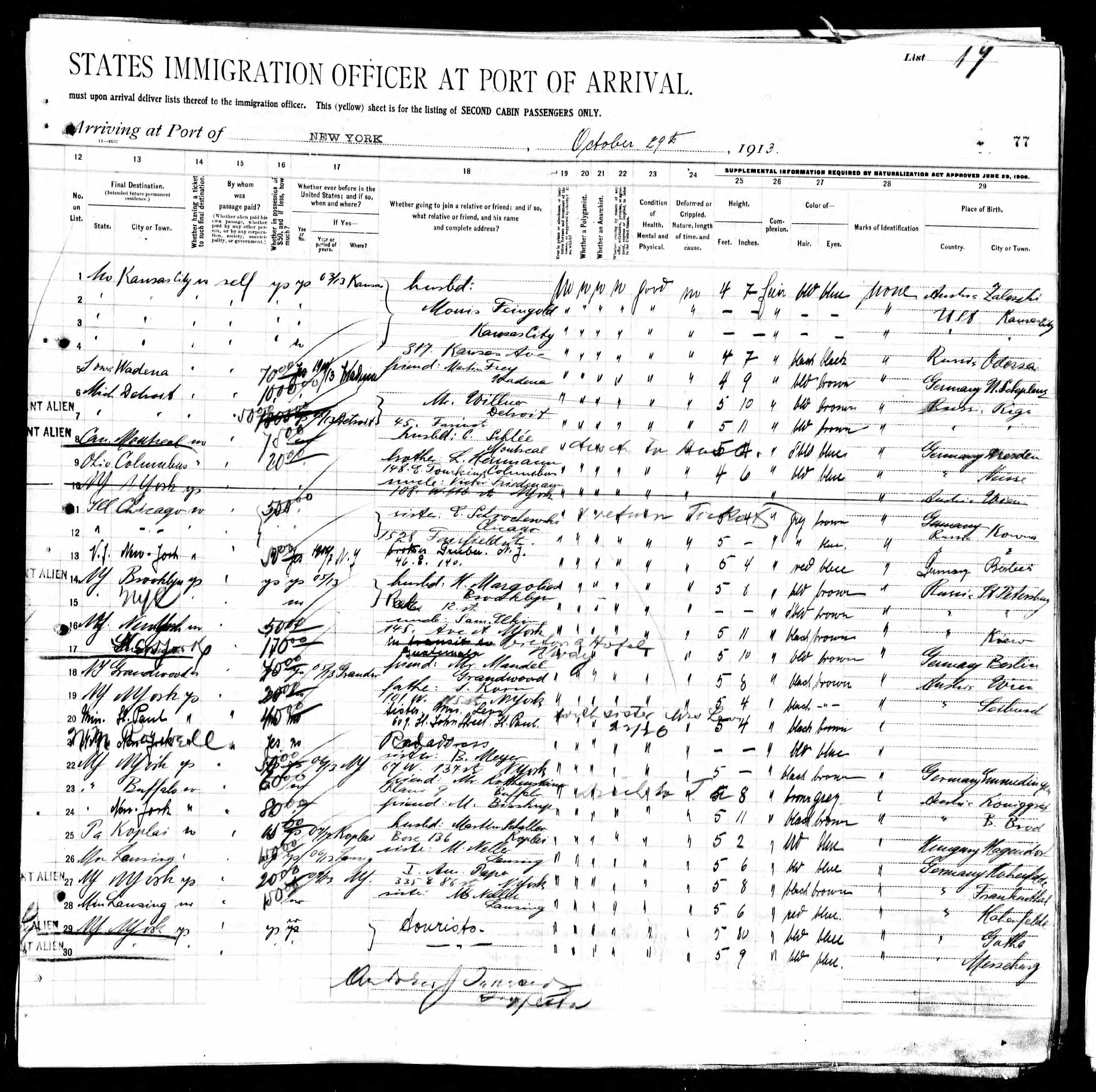 On the Hamburg side, we find the emigration record from Hamburg. On line 459 is Edna Margolies, 25, an American (?) living in Brooklyn, and on line 479 is Rieva/Riva/Rieve/Rive Asernova, 9, a Russian from Star?yruska (?). There's no explanation why the two are not shown traveling together on the outbound side. 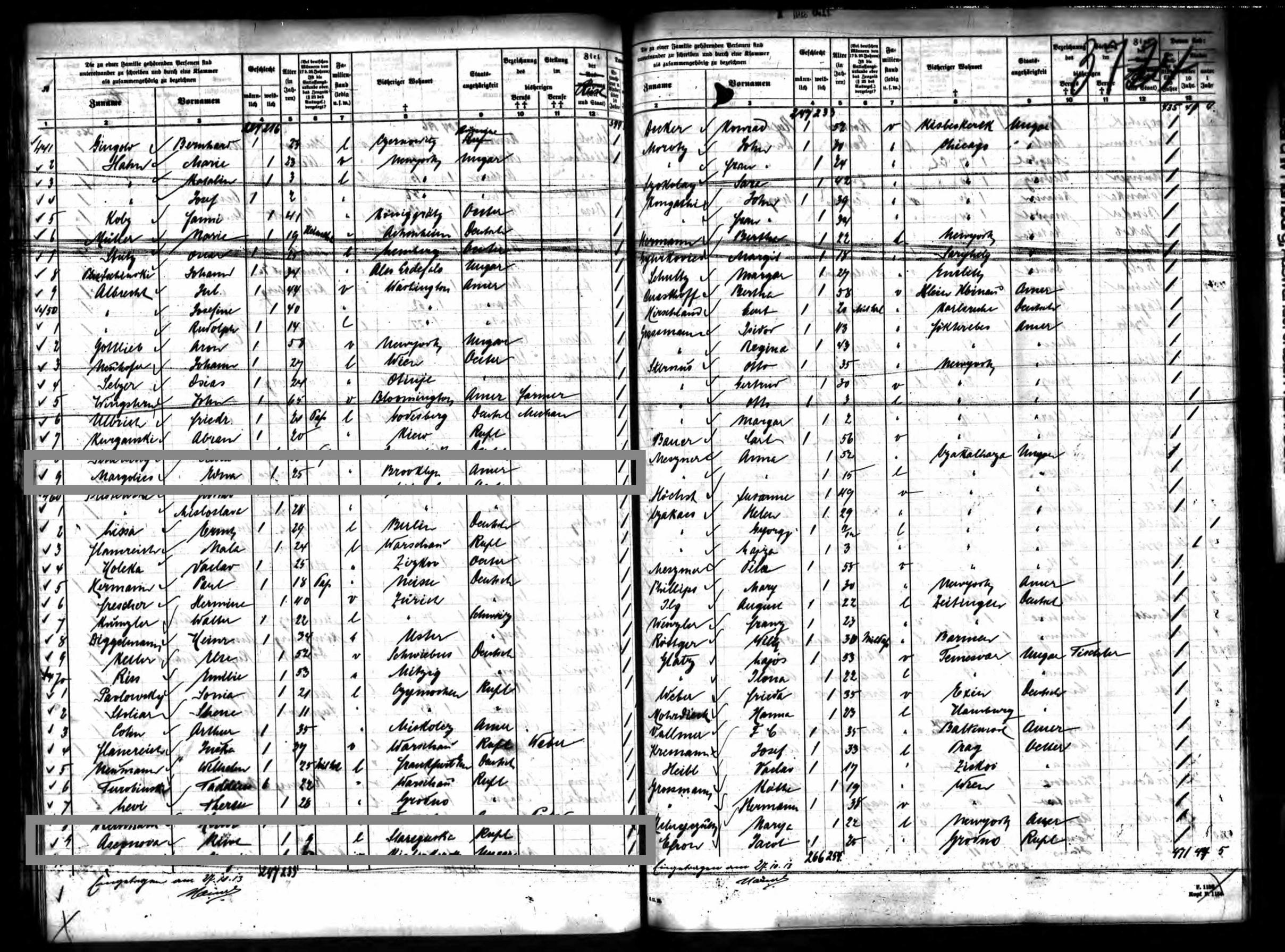 Starai Russa or Staraya Russa is a town in Novgorod Oblast, about 300 km south of St. Petersburg.

I haven't been able to find a record of Edna's marriage to Mr. Margolies (or Margolis or Margulies etc.). I have found a Harry Margolies, b. 1888, living in Brooklyn, and a Bernard Margolis in Brooklyn with wife Edna; either or neither of these could be relevant.

If this were my family, I would trace the Axel family forward to find out what happened to them, and I would attempt to figure out how Margolies fits in. Also, where does Plattstein come from, and is there another parent name cut off from the original record?

Not the answer you're looking for? Browse other questions tagged united-states 20th-century new-york-city name-change or ask your own question.

7
New York City vital records collections
10
Where can I search for elusive vital records (birth, names of parents, death) for my great grandmother, Celina Drollet?
12
How old *are* these people?
8
How to find Indentured Servants in Buffalo, NY or Canada?
10
Did 19th century English women sometimes change the first name they used?
7
What New York City vital records are covered by this index on FamilySearch?
7
Finding people who have moved within the same geographical area?
3
How to interpret dates on California Indexes to Electoral Registers
0
Finding record of US name change in 1920s in New York?