I'm trying to locate the birth location and parents of "Thomas Tunin". I have done extensive Google searches but have so far ended up at a deadend on these particular details. Any suggestions on where to go from here?

Thomas Tunin and Mary Almeda Phocbus were the parents of four sons: Elbert, Bloomer, Willard, and George and also two daughters; Martha Ann and Lura Almeda. The children were all born in Illinois.

They moved to Kansas in 1878 and then to Indian Territory which became Bartlesville OK in 1885. They moved to Dewey County about 1895 homesteading in Sec. 25-18-15. The son, George and daughter Lura came with them.

They came by covered wagons, bringing a few cows, chickens and horses. They cooked on a camp fire under a cottonwood tree and slept in the two wagons until a dugout could be made. They had many hardships as Mrs. Tunin was sick and in bed at the time. She died in 1897. They lived with the John Lutton family on a part time basis then. 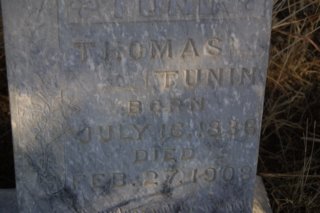 The above shows death in 1908 though?

We've all confronted the circumstance where it is a struggle to confirm something we located that seems unsourced information about an ancestor.

The three points above are all examples of working "from the known to the unknown."

From the information provided, Thomas Tunin was born in the 1830s. There are not many birth records available from that period in the US, but as they say, "it's all local." Even if a birth record does not exist, it is quite possible records exist by which you are able to prove a birth date or approximate date and parentage.

Good luck in your quest.

NOTE 1: When you post information to the internet, you are "publishing" or "distributing" something. Facts, which include represented names, dates and places are generally considered outside the bounds of US copyright law. That exclusion does not generally apply to narrated material and other creative works, such as photographs. Your question includes information that is quite likely subject to copyright--the apparent extended quote from Spanning the River and re-posted tombstone image. You should always try learn the copyright rules that apply to material you didn't develop yourself. Personally, I use a basic rule of thumb about genealogy and copyright. In a nutshell, without permission, I try to quote less three sentences or the textual equivalent from material dated post-1923. Also, without permission, I want to link to (rather than repost) images that are not in the public domain.

While you may have permission to post this various information or some other reason to believe it is in the public domain, it was not obvious to me.

Please help us keep Genealogy.SE free of criticism and complaint by revisiting your question and either making adjustments or disclosing permissions.

Not the answer you're looking for? Browse other questions tagged united-states 19th-century oklahoma or ask your own question.

14
Locating New England telegraph man (Lemuel Keyser Preston) ca1850?
8
What were the rules about Massachusetts town marriage intentions ca 1811?
7
First wife / birth mother left out of history?
5
How did US census takers record household information?
11
Could an Ohio resident be in the Indiana militia? (Timeline resolution)
4
Finding record of Peter J Starrs in USA prior to 1870 Census?
5
Starting pre-1837 research in England and Wales?
5
Interpreting 1832-1839 Bodmin Gaol records for George Wills of Illogan?
11
How can I distinguish between name changes and missing records?