I am trying to understand the full meaning of the remarks shown on this record from the United States Marine Corps (USMC) Muster Rolls. This is from July, 1948.

The numbers in the first (NO.) column refer to records within a rank. FEITLER was in the "Corporals" list.

I am interested in the meaning of footnote "K"; I believe 30 is the man's age.

Where can I find "SPEC NO" code meanings?

The image is actually from a set of muster rolls, for which one part of this batch of returns is subtitled, "Discharged." The graphic below is from the same image page listed above, it shows the subheading. (Your man FEITLER was the fourth listed corporal.) 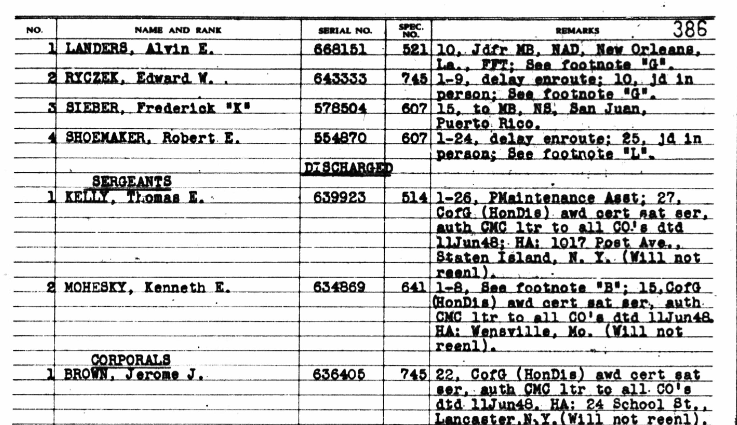 Muster rolls are lists ... of the names of soldiers assigned to any military unit ... The rolls were made at the time a unit was created (muster-in rolls), when a unit was reorganized, when two or more units were merged, and when a unit was disbanded (muster-out rolls). Names appearing on a muster roll indicate those who were present or accounted for on a given date ...This roll was used as the basis for pay due the soldiers ... Remarks might include information about any individuals absent or deceased ...

I suspect there are separate discharge papers about your marine.

Sadly, it would seem US Marine Corps officials have chosen to move relevant personnel manuals off-line. See, for example, "Marine Corps Personnel Manual (MCPM) (1949)." Note the foia ("Freedom of Information Act") in the URL; then click the link for the big "404 - Page not found." Links like "United States Marine Corps (USMC) Orders and Directives," "USMC Chronologies," and "USMC in WWII" on the "USMC FOIA Reading Room" also returned 404 errors for me.

While the Marines likely had different procedures, the discharge papers in my father's US Army 201 file are quite different than these "muster rolls." Dad was actually honorably discharged twice; the back side of each "discharge" paper includes a summary of service.

Blush, blush, blush. I just realized that in my personal files I have the final discharge papers of two men--my father (1946) and his ancestor, Rev. War patriot, William Preston (1780). Wow. What an honor.

You inquired about "Footnote K"; it can be found in the same batch of images. The image you reference is actually 626; there are footnotes that seem relative to that batch on 629 of 995. 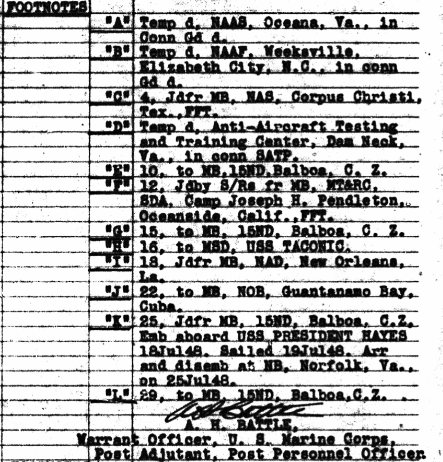 (I was working on a better graphic, may yet pop it up here.)

While the classifications likely changed, for time relevant usage of the term "specialist number," see the article, "Marine is one of 26 from  company to survive Iwo Jima" (Sauk Valley Media, November 14, 2011)

Oliver Taylor stormed Japan’s Iwo Jima with 284 Marines at his side. With barely a scratch, the machine gunner sailed back to Hawaii’s Pearl Harbor with just 25 men, only to be redeployed for a planned invasion of Japan ... “I was an especially big target, because everyone wants to lick a machine gun man,” Taylor said. “I got that specialist number, and I couldn’t get rid of it.”

Only somewhat related, in my dad's Army 201 file, the document that served as the authority for his final discharge was called a "Separate Qualification Record," it contains his "Army Serial No" and a list of his assignments, each of which is associated with a "Military Occupational Specialty" that was identified by a title such as "Supply and Evacuation Officer Staff" and a number, like "2100."

"U.S. Navy Abbreviations of World War II," by asisbiz (asisbiz.com), reportedly "The text of the [Glossary of U.S. Naval Abbreviations which] was prepared shortly after the close of World War II. Transcriber/site owner reports it is "exactly as in the original, except that fifty-nine words which originally appeared in an addenda page have been integrated in the main text of the document." [Wow!]

According to the Ancestry.com description, the database and digital images that make up, "U.S. Marine Corps Muster Rolls, 1798-1958," come from two National Archives (NARA) collections:

This image is from the unit muster for whichever unit he was in at the time. It is a chronological record of who was in the unit at the time.

The muster is created when the unit is formed and then updated monthly with any unit activity such as personnel joining, transferring, discharging, etc. In this case it is for the month of July, 1948.

The 4 in the No column indicates he is the 4th Corporal listed in the chronological record of discharges section. The Serial No column is his service number (used before the SSN was used as the service number, since replaced by the EDIPI). The Spec No column indicates his specialty (now military occupational specialty or MOS). Specialty 745 indicates he was a rifleman (now called an 0311 or grunt). The Remarks column is a record of what happened to this individual during this month. The See footnote "K" means there are other remarks summarized in a footnote that was too much for the remarks section or (more likely) applied to more than one person on the muster.

If the other pictures posted are from the same record, footnote K would indicate that on the 25th of the indicated month (25), he joined from (Jdfr) his previous unit which looks like Marine Barracks (MB), 15th (15) Naval District (ND) Balboa C. Z. (Balboa Canal Zone in the Panama Canal). He embarked on the the Naval Ship USS President Hayes on 18 Jul 1948 which sailed on 19 Jul 1948. He arrived and disembarked at Naval Base (NB) Norfolk, Virginia on 25 Jul 1948.

Although I cannot find a record of the actual letter, the CMC letter to all COs date 11 Jun 1948 was likely a letter from the Commandant telling all Commanding Officers that they could, at their discretion, let Marines out of the Corps earlier than their contract would allow. This is done fairly often in order to meet some objective or for some other reason. They used to do this every year before Christmas if Marines were getting out early in the new year in order to allow them to go home for Christmas and not come back. It is likely that this letter was allowing COs to release Marines early to assist with the post WWII drawdown.

The letter also probably contained the authority to promote those that were eligible for promotion prior to their original contract expiring on their new discharge date so they didn't feel like they would lose out on a promotion if they took advantage of the opportunity to get out early.

The Marine Corps Muster Rolls have always presented very peculiar abbreviations and references. In this case, the first "No" column indicates how many Marines are counted within that particular rank, in this case, he is a Corporal (newly promoted on the 30 Jul, 1948). The name and service numbers are obvious, the "Spec. No.", is what we now call the "MOS", in his case he was a "745", which was a "Rifleman". The number "30" that you questioned is not his age, it is the day of the month in which the event transpired.

The reference "CofG" always appears in reference to the expiration of the Marine's enlistment, I have searched in vain for years for it's actual meaning but found nothing! What the passage means literally is that 30 July 1948 is the expiration of Enlistment, (Honorable Discharge) awarded certificate of satisfactory service (as opposed to receiving a Good Conduct Medal, which required a "Character Excellent" rating from your Commanding Officer), authority Commandant of the Marine Corps Letter to all Commanding Officers, dated 11 June 1948; Home of Record: 7914 St. Lawrence Ave., Chicago, Illinois.

As for "Footnote K", translated it means:(the date he joined the reporting unit) 25 July 1948, joined from Marine Barracks, 15th Naval District, Balboa, Canal Zone. Embarked aboard USS PRESIDENT HAYES on 18 July 1948, and sailed on 19 July 1948. Arrived and disembarked at Naval Base, Norfolk, Virgina on 25 July 1948.

Footnote K would be somewhere in the document(s) as a note explaining the reference. It doesn't appear to be shown in the image. I believe you are correct about 30 as the age. Satisfactory service would be consistent with the abbereviation sat serv. As far as SPEC NO code meanings a search of those may be directed within Department of Veteran and Military Affairs (DMVA).

The snippet provided looks to be a defer to re-enlist and discharge from the Military.

The abbreviation CofG in the Remarks column means for the Convenience of the Government.

The term has been discussed on a page entitled Getting Out of the Military for Misc Reasons: Convenience of the Government.

Not the answer you're looking for? Browse other questions tagged united-states 20th-century military-records navy or ask your own question.