Of a death certificate and a gravestone, which record should be trusted more in determining birth date?

I have an ancestor for whom I have very little information for. I am trying to identify the exact birth date for this person. I have a death certificate which lists the birth date as "May 1st", however the gravestone for this person lists "May 4". I am certain that the numbers were readable, so there is definitely a discrepancy in the dates.

Is there general guidance for this?

For those who may be curious, attached below are the records.

I missed it before, but the year of the birthdate is actually different by 1 as well. (1962 on the gravestone and 1961 on the death certificate) I am actually more concerned about the year than the actual date, of course. 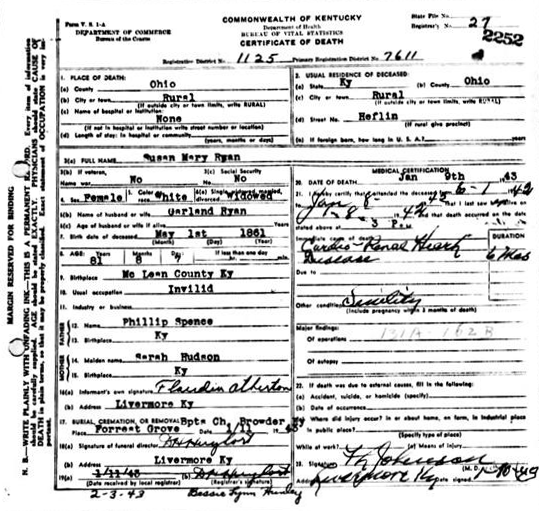 The information given on a death certificate comes from an "informant," typically a family member who was present when the person died. In my opinion, after examing many, many death certificates, informants are often not that knowledgable about the early life of the deceased, and there are often mistakes. (As I have said many times, "The person who knows just died.") Death certificates provide valuable genealogical evidence, and while they provide PRIMARY evidence of death date and place, at best they provide SECONDARY evidence of birth date and place.

As far as gravestones are concerned I do make the assumption that planning and ordering a gravestone is a more deliberate activity than informing on a death certificate, with plenty of time to check with distant family elders, maybe brothers and sisters of the deceased, about the details of the person's birth. In general I am willing to accept the gravestone date when there is a conflict. And with either date in hand you are well suited to start a search for more evidence of the person's birth.

All this goes by the wayside when the grave marker was put up by a later generation. This is often the case, and for me this puts the preference back onto the death certificate.

I would record both dates (with their sources of course), and I would give preference to the gravemarker information, but I would continue the search for primary evidence of birth. And as in every other aspect of genealogical research I never assume my assumptions are correct! One needs preponderance of evidence, and these two dates, if in conflict, do not give it.

Neither of these sources can be depended upon without question. I would cite both records in my notes. Then I would continue my search for other documents or circumstantial details that would help to solve the problem. You may never be able to solve the problem with certainty, but occasionally, obscure sources provide unexpected results, i.e. possibly a church record, doctor/hospital record, obituary, funeral home record, or a newspaper story if the death was of unusual interest. Fully researching other members of the family can sometimes turn up surprising information that could solve the problem. Bible records sometimes document the death of someone who married into the family or even unrelated persons. Never give up!

Both tend to be reliable. Unless you have a reason to doubt one, normally you should accept what it says.

If you have information from both the certificate and the gravestone and the information on them match, then you'll be even more confident that they're correct.

If they don't match, then you'll always have doubts until you find a reason for the mismatch. You'll then want to find a third and/or fourth source to confirm. Maybe an obituary or church record. Detective work will be required.

Linking with Tom's answer, I would consider birth dates on BOTH the death certificate and the gravestone to be doubtful, but as pointers to the approximate date.

I would normally only consider a birth certificate to give certainty, but even birth certificates can contain mistakes or errors. This reinforces the principle of never show unwavering trust in a sole-source, however reputable!

Cases such as men lying about their age (to allow military service) or even just family legend can cause dates to be misrecorded.

To the point of your question, I am not aware of any general guidance about whether the date of birth reported on a tombstone or death record is more accurate, especially for the circumstance of this case, as there seems a minor variance in the record between the two.

If there is any science or research to back up the notion that one is "better" than another, it would be interesting to see. I may have a little experience bias, but as with other conflicted information, I would work to weigh the research and information.*

Dates of birth and death are an important part of identity. Except in rare circumstance, it is hard to imagine that the difference of a few days between these sources would rise to the level where the identity became in question. Especially so here, given the facts as we know them, including that both differing dates are both made long after the fact.

A conclusion doesn't always require a date certain, either. In the, "is it really necessary to split this hair," there is nothing wrong with entering the birth as "1(or 4) May XXXX" [... or "4(or 1) May XXXX"]. In that case, I would cite both records by giving preference to whichever record I was reporting and noting the minor discrepancy with the alternative record that was in parenthesis.

Updated note: Learning that the two sources differ as to year of birth, you now have some "real meat" :-) to work with.

Supplemental information: If our birth record location clue is correct (from the death certificate; McLean County, Kentucky), then it seems unlikely a civil record of birth exists for dear Susan. According to n2genealogy, McLean County was formed in 1854; the county has marriage, court, probate and property records from that date forward. According to McLean County GenWeb, "Information and Photos," the "[McLean] County Clerk has birth and death records" from the years 1911-1949.

Trying to locate a baptismal record would involve yet other research.

The general guidance is that you would prefer the record created closer in time to the relevant event. On that basis, there is not much to choose between them.

You can construct a plausible argument for choosing either but in the absence of further evidence, it would be guesswork.

With the reliable knowledge that the person was born in early May of a known year in a known place, you can now obtain a copy of his or her birth certificate which should be better than either of your current sources (with respect to d.o.b).

As others have suggested, neither are guarenteed to be accurate. Both are items of evidence that must be reconciled with each other, and with other items, in order to form your conclusions.

I encountered an example of this recently where the date-of-birth for a child was deliberately rolled forwards in order to coincide with a second (and bigamous as it happens) marriage of the mother. The second husband was the biological father but she was technically still married to the first husband when the child was born. The father's name was also deliberately misleading. This false d.o.b continued throughout her life.

The birth certificate confirmed the real d.o.b in this case but even that is not always 100%. Assuming the d.o.b is legible (which, as we all know, isn't guaranteed) then there is a reliance on whoever was present to have reported the correct date. I can't claim to have a specific example of a false date but I certainly have birth certificates with an incorrect surname on them.

With regard to the additional information provided, we are able to try to draw some inferences about the sources.

The document has been typed in part and then had hand-written additions (since the reverse order is improbable). This suggests that the person doing the typing was not in possession of all the relevant information at the time. If a family member then contributed what was missing, would he or she have overlooked the d.o.b error?

The deceased is described as an INVILID rather than INVALID casting some doubt on the literacy of the typist (an over-reliance on pronunciation). On the other hand, the dates listed (for birth and death) and the calculated age at death (81 8 8) are internally consistent which reduces the chance of a general lack of care in the preparation.

There is not a lot of detail visible in the stone, but my initial reaction is to ask if this is stylistically appropriate for Kentucky in 1943. Might it have been added to the grave at a later time (when minimalist, flat to ground markers were in vogue). If so, is it possible that the mason will have copies of any instructions given for the job.

On balance, I don't think i have found anything to revise my original view -- there is little reason to prefer one source over another AT THIS STAGE.

Not the answer you're looking for? Browse other questions tagged death-records grave-marker or ask your own question.

0
How can a gravestone and death certificate be a year out?
15
How should I deal with conflicting information?
18
What is the difference between "primary information" and "secondary information?"
8
Assessing accuracy and confidence in different types of records?

10
Why did my Uncle's Death Certificate Not Appear in the Family History Library's Archives?
5
Finding 1863 birth of John Sellars and death of his father Robert (British subjects) around 1870 in Panama/Colombia?
4
When did Samuel Friedrich Walcker die?
9
Gravestones without date of death seems odd. Is it common?
5
What is the actual date of death for this self-contradictory death certificate?
4
How to find out where someone died in 1952 United States?
2
Trying to find birth and death info for Thomas and Sarah Bissell
2
Why did many 19th century death certificates list age in years, months and days?