Recording person on Ancestry.com who may or may not have existed?

I have received an old genealogy report from a relative and it reads thusly (names changed for brevity):

For comments like "some accounts" for the last child, how do I represent that on Ancestry.com? (Presumably as if to say, "this person's existence is debated"?)

User fbrereto asks about how to use Ancestry.com to share a conclusion that is based not on proof, but on "some accounts." I interpret "some accounts" to mean there exist some sources (including some family tradition) that reports about this sixth child, but that proof is lacking.

See Elizabeth Shown Mills, Evidence Explained ..., 2007 (p. 17) for "Conclusion: Hypothesis, Theory & Proof," in which she explains how conclusions can be categorized as one of three types, "each of which carries a different weight." Her categorization types follow; I have added my own summary as to the meaning of each.

During the research process, you may frequently ask yourself, "is this him/her?" You are probably forming a hypothesis. After extensive research, you may still be uncertain. You have a theory that is as yet unproven ...

If you use a genealogical database or online web service, you have the option of sharing your "research-in-process," or only sharing that which you have proven.

If you share your work-in-process, then you probably face the question fbrereto is asking. In his case, he has an old genealogy into which the author narrated about notions about a relation that fell short of "proof."

To my knowledge, Ancestry.com is like many database systems, it provides the ability to add a related individual (spouse, parent, child), but there are not obvious mechanisms to communicate whether that conclusion is based on a hypothesis, theory or proof.

(a) While many of us would like more overt solutions, a proof (and/or proof-in-process) can be communicated by a comment to the individual's Ancestry.com profile.

(b) Notions that fall short of proof ("hypothesis" or "theory") can be communicated in the related event "description" field (for parent/child, this would be a birth event; for spouse, this would be the marriage event).

These are only suggestions; I doubt either of these work arounds are widely used or recognized.

I would not want my words to undermine the importance of the distinctions between genealogical hypothesis, theory and proof.

[T]he difference between a theory and a hypothesis is important when studying experimental design ...

Lacking direct evidence, a genealogical proof is something that is written. Historically speaking, the work considers the full range of evidence relevant to the problem.

My own family history follows a mostly narrated style. As with the author of fbrereto's material, there are relationships in my tree that can be documented (with a source about something), but those relationships are yet to be proven (genealogically speaking).

At least I find these pose the greatest challenge in database presentation. As part of current work on "one-tree" systems, I've been trying to advance my own approaches to database presentations about notions of hypothesis, theory and proof. An example follows about the comment I add to a conclusion that I deem a hypothesis:

Dr. Charles Banks (History of Martha's Vineyard) concluded that Dorcas Bessey, daughter of Anthony, was the wife of John Presbury (d. 1679 of Saco). Others either dispute the notion or find material unresolved conflict. This includes that Robert Charles Anderson, The Great Migration Project (for Anthony Bessey), did not report any spouse for Dorcas. Lacking a genealogical proof, I conclude that the wife of John Presbury (d. 1679) is only possibly, not probably, Dorcas Bessey.

I consider this a hypothesis because even if I have the materials they worked with, I do not have the experience of Banks, Anderson, etc. On the other hand, I probably do have more information about the "whole" persons/families generally associated with John Presbury (d. 1679). In other words, I may have information or context that Banks, Anderson, etc. did not have; there is probably more that could/hopefully will be discovered.

It's possible that I could further develop those various materials in such a way that it would constitute a theory. Until then, I consider conclusions about Dorcas Bessey and John Presbury (d. 1679) to be just a hypothesis.

While this is not a direct answer to your question (@GeneJ has done that), I thought it was worth mentioning that some desktop software (such as Legacy) allows you to formally include a certainty level in the details of source citations. It's a little obscure to find it, but as you can see from this image, you can pick from five levels: 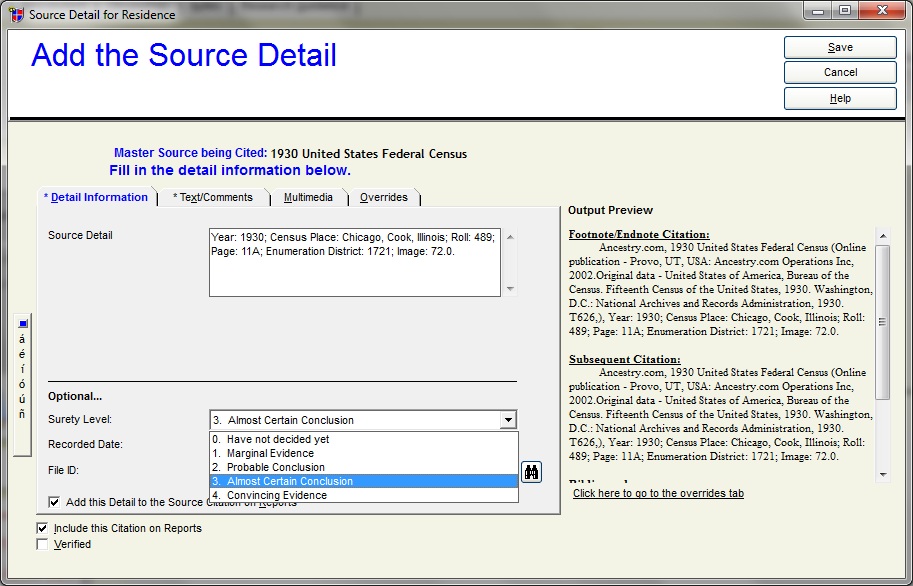 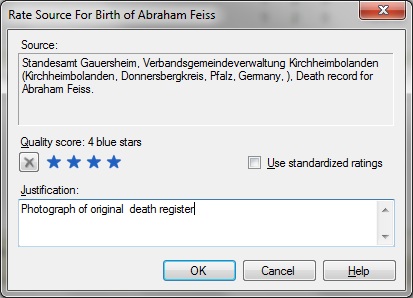 Another version of the same dialog permits more structured annotation of source quality: 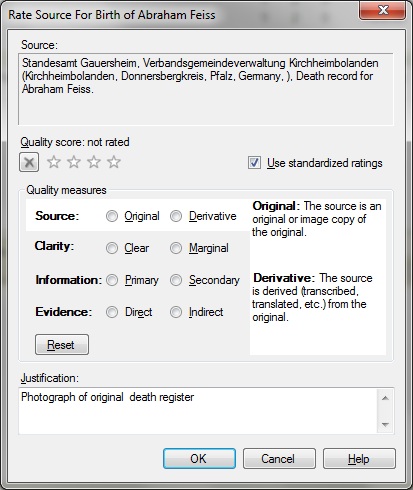 So it is possible to represent this information explicitly; just not on the web site.

Not an answer per se, but I'd like to point out that uncertainty of this sort generally covers 4 cases:

Summing them all up as "A may be the child of B and C" doesn't do the evidence justice.

Not the answer you're looking for? Browse other questions tagged ancestry.com data-storage proof or ask your own question.