What was occupation of Viewer?

On my parent's marriage certificate dated 1954, my mother's occupation is given as "Viewer". From oral testimony, I know that they met while both working at the Rover car factory in Solihull, UK.

I've googled without success to find a description of what a "Viewer" did, so am asking here for either an explanation or a pointer to where I can find one.

The OED gives the following definitions:

viewer, n.
1.
a. A person appointed to examine or inspect something, either on a special occasion or permanently; in later use esp. an inspector or examiner of goods supplied by contract; †spec. in Law, one appointed by a court to inspect a place, property, etc., and report upon it.
b. An overseer, manager, or superintendent of a coal-mine or colliery.

Based on the context – the individual was a woman, and it was the 1950s – I think the first definition is most likely the one that applies in your case.

Here is a job advertisement from the Birmingham Evening Despatch on 25 May 1944: 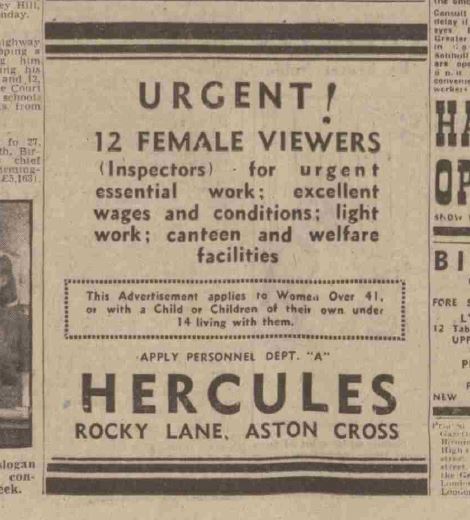 You will note that this is an advertisement from the Hercules Cycle and Motor Company in Birmingham seeking female viewers (inspectors).

Another advertisement, from the Birmingham Daily Post, 24 Nov 1939, gives an idea of the technical skills one employed in this position may be required to have:

A search of other newspapers from the 1940s and 1950s will return many similar advertisements in a variety of different industries. The above examples may be war-related employment; the Second World War may have been a reason why more women became employed in this type of role. Other job advertisements were looking separately for inspectors and viewers, suggesting that viewers were in some factories subordinate to "Inspectors". There are many advertisements looking for male inspectors or viewers as well. The nature of the occupation of viewer no doubt varied greatly depending on the industry and employer, but it was probably quite skilled and technical work.

I don't know if it applies to the automotive trade in the 1950s but a viewer in coal mines, certainly in the 1880s was a section manager, overseeing a department or coal seam. It could be that she had a managerial role, overseeing a certain part of the manufacturing process.

I don't know for sure, but it does apply to mining. It was one of the things I remember vividly from a school visit to a coal mine in Wales. The role tended to be given to women or older men who weren't physically able to do the manual labour.

Look forward to anyone else who might have a better explanation.

5
What does the occupation “Works in Woods” mean?
5
Searching for 1948 C&EI Railroad Employee?
2
What is occupation that looks like “Pre MJ” on 1841 census from Cornwall, England?
2
What was occupation of Skipper in 1855 New York State Census?
3
What occupation is a “bottom puller”?
3
Case for seeking quotation to digitize Greenwich Hospital School admission record of John Smyth in about 1755?
2
Did Richard Hill and Blanche Todd live in India in the late 19th Century?
5
Starting pre-1837 research in England and Wales?
7
Formulating a strategy to locate a marriage
2
What is Census occupation named Folder Work?