Who are the individuals silhouetted in this image?

(Note: I have more questions about this image than answers, so anything you see in it that is of note to you, please call it out!) 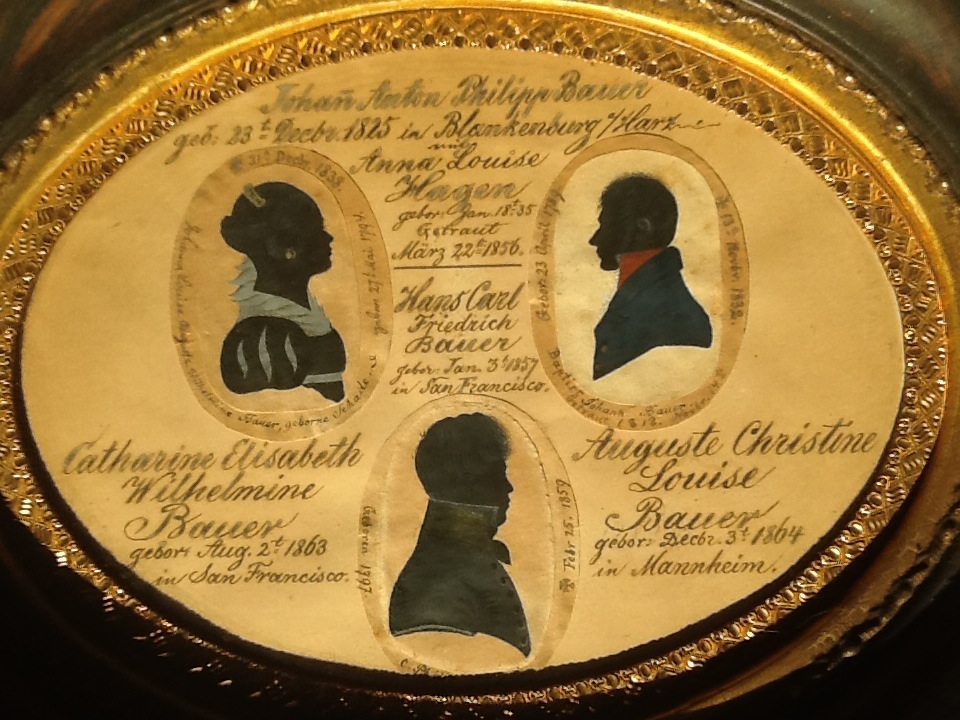 Other questions related to this image:

My sense is that there are more than two generations here, and that the portraits are not of the children. Here's what I've been able to read from the image:

Info from the images

It is not clear who is represented by the bottom image, as his name is cut off by the frame.

Edited to correct names per comments below

Looks like the three silhouettes (parents + godfather?) were done in Germany around 1820, and brought to California by a descendant. Then sometime after 1864 they were incorporated into this family tree collage.

Are you related, or simply curious?

I would say the top right male was done first and originally read "Johann Bauer 1818". Perhaps a gift for his betrothed. This was later changed to "Baptist Johann Bauer, married 1818 November 14" and birth/death dates added. I assume his full name was Johann Baptist Bauer, and the changes were made to differentiate him from his son. These additions are in a different hand, and overlap the oval into the silhouette.

The other two silhouettes were probably created at a later date (pre-1830). They are both of the same scale, but also of a slightly larger scale than the first. Note that the first has a chalky background.

Then another person, of lesser cutting skill, created an oval for the female silhouette, trying to match the first. Again, the female appears to have originally read "~ Wilhelmine Bauer, born Schade ~". Full name and birth added later, then thirdly the death.

The birth date for the bottom male was added after the entire collage was completed, as you can see an overlap onto the main paper, and a new scribe with unique 7's. His name appears to be C. Philipp something. My guess would be that he is the godfather of the younger Johann, as often Germans incorporated a godparent's name into the godchild's name. The initial C is most likely Carl, Christian, or Christoph. Last name possibly Bauer or Schade.

I'd say this collage was pieced together in the 1870's or 1880's, after it was obvious that they were done having children. Perhaps one of the daughters created it.

In answer to your naming question, Catharine Elisabeth Wilhelmine "Minna" Bauer is how I present a nickname within a proper name.

The object contains 3 silhouette portraits. According to History of Antique Silhouette this type of portraiture was popular both before photography and up to 19th century. The embellishments suggest a late 1800s date for the images. The images do not necessarily depict a particular individual as stock cutouts were used.

Taken as a whole, I would interpret the object as an illustrated family tree, but it is not in a form we are familiar with today. The annotations give dates ranging from 1729 to 1864. The annotations encircling the silhouettes probably refer to earlier generations, those on the mounting mat (top layer) appear to be a couple plus 3 children.

Using 'old fashioned' imagery to convey a link to the past is a device still commonly used.

4
Can I obtain a free version of this public domain image?
7
Weird date/year issues; what is the correct way to present the summarized information?
12
What is written on the back of this photo?
7
Renaming record image and PDF files with generic download names
7
Citing online image copies with inadequate information or provenance
8
How can I process this image to extract more of the information
5
What year does this toy tricycle appear to be?
1
When did FOX CO make photographs of this style?
1
When do you decide to add media to the Fact or the Source Citation?